Virat Kohli missed the fourth and final Test against Australia at Dharamsala due to an injury. (Photo: AFP)

Mumbai: India cricketer Gautam Gambhir has defended skipper Virat Kohli’s decision to skip the fourth and final Test against Australia. Kohli’s commitment was earlier questioned by Brad Hodge, but Gambhir feels that people say anything to be in headline.

“That’s absolutely not valid,” Gambhir told CNN. “I feel that someone who’s playing for their country and captaining it would never want to miss a Test match and would definitely want to play for India more than any other tournament. That’s always been the case.”

“Knowing Virat he would have never done that and these people, look if you want to be in the headline you can say anything you want and it’s just about making a headline or trying to get your name in the press by making such statements. If you don’t know the extent of the injury you should not be talking about it,” Gambhir added.

Meanwhile, Bollywood actor Amitabh Bachchan has also come out in defence of Kohli against Hodge’s criticism.

Bachchan shared his support for Kohli on Twitter, he wrote, “Virat skipped 4th to play IPL .. RUBBISH ! he did it to tell you that his team can wallop you even without him !” 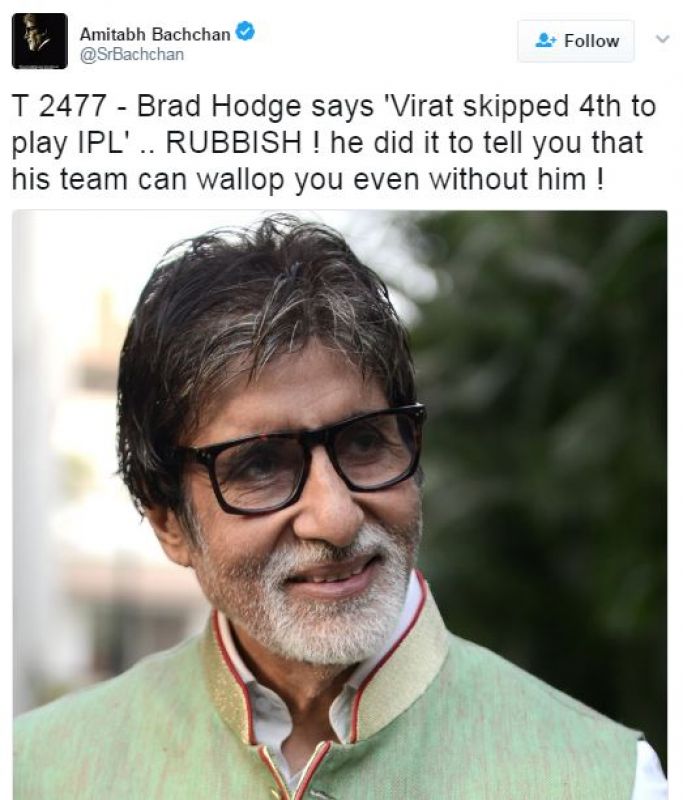 Earlier, Hodge had questioned Kohli’s commitment suggesting that the Royal Challengers Bangalore captain is more keen of playing the IPL rather than trying to win the series against Australia.

“You would think that your captain would get out there and get amongst the fight and get in there,” Hodge said. “You’d hope as a sportsman that he’s seriously injured.

“Because if you miss one game of Test match cricket and you’re fronting up the next week for Royal Challengers Bangalore (RCB) versus whoever … you’d be pretty dirty if he didn’t front up to a Test match and try to win a valuable series against Australia.

“It’s happened before. Not just Virat but there’s many players that have come up to IPL time and … look, we know it’s a cash-rich tournament, there’s some money up for grabs. There are certain players that will limp in, to IPL time, to make sure they get there and perform well,” said Hodge.