Nevertheless, earlier, several reports came out stating that the veteran wicket-keeper batsman had joined the battalion on July 24, but after he was spotted at the Mumbai Airport, MS Dhoni's appearance at the airport indicated something else. (Photo: PTI)

Mumbai: After reports came out stating that MS Dhoni has taken two months break from international cricket to serve for the Paramilitary regiment, the former Indian captain was spotted at the Mumbai Airport on Saturday, July, 27, 2019. 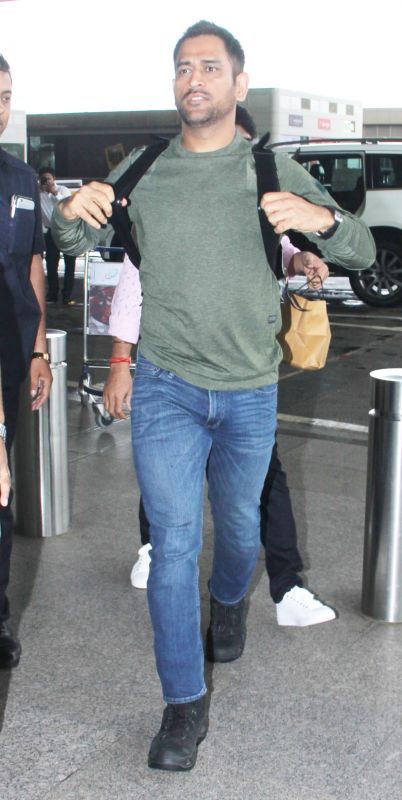 After India crashed out of the 2019 World Cup, following a loss to New Zealand in the semis, Dhoni made himself "unavailable" for the West Indies tour. The 38-year-old clearly told the BCCI that he wouldn’t be available for two months to train with the Indian Army’s Parachute Regiment.

Nevertheless, earlier, several reports came out stating that the veteran wicket-keeper batsman had joined the battalion on July 24, but after he was spotted at the Mumbai Airport, MS Dhoni's appearance at the airport indicated something else.

On July, 25, the Indian Army stated, "Lieutenant Colonel (Honorary) MS Dhoni is proceeding to 106 TA Battalion (Para) for being with the Battalion from 31 Jul-15 Aug 19."

The statement also mentioned that the unit will be training in the Kashmir valley as sub-division of the Victor Force. "As requested by the officer and approved by Army Headquarters; he will be taking on the duties of patrolling, guard and post duty and would be staying with troops", the statement mentioned.

Dhoni possesses the prestigious post of Lieutenant Colonel in the Territorial Army unit of the Parachute Regiment (106 Para TA battalion). The title was conferred to Abhinav Bindra, Deepak Rao and Dhoni by the Indian Army in 2011.

In 2015, Dhoni qualified as a paratropper after completing five parachute jumps in Agra. After India’s ouster, Speculations regarding Dhoni’s retirement has been doing the rounds, but the team management asked him not to retire until Rishabh Pant gets properly trained before the 2020 T-20 World Cup in Australia.