Shami's participation in the Indian Premier League was cleared after the BCCI offered him a fresh central contract, which it had withheld following his wife's police complaint.(Photo: PTI/AFP)

Kolkata: The saga involving Mohammed Shami along with estranged wife Hasin Jahan seems to be taking a turn for the worse, day by day. Two months earlier, Jahan accused the Team India pacer of extra-marital affairs, domestic abuse, match-fixing and other serious allegations.

And on Saturday, she launched another scathing attack on the Bengal pacer, accusing him of creating a fake birth certificate that helped him play national and state level cricket. Taking to Facebook, Jahan shared a picture of a driving license, claiming it belonged to Shami.

As per the current record, Shami was born in 1990 but the driving license photograph shows that he was born during the year 1982.

She even added that Shami fooled the Board of Control for Cricket in India (BCCI), Cricket Association of Bengal (CAB) and the UP Government in order to keep his career on track.

The 28-year-old fast bowler has had a rough time off the field with his wife Hasin Jahan filing a police complaint against him for domestic violence and accusing him of match-fixing.

He also sustained a head injury after his vehicle collided with a truck when he was on way to Delhi from Dehradun following a short training stint before the IPL.
His participation in the Indian Premier League was cleared after the BCCI offered him a fresh central contract, which it had withheld following his wife's police complaint. 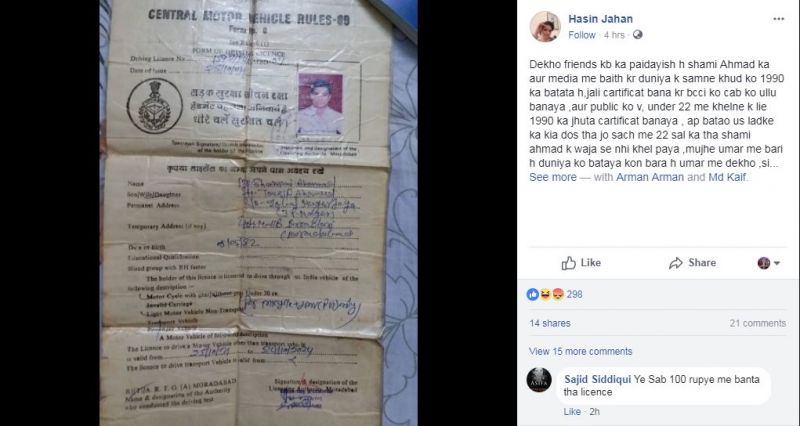 "I think he has got some personal stuff going on. And it's tough to concentrate on the job sometimes. Players try to use cricket as a release. Everywhere you have to sort out your off-field stuffs before you start performing on the field. He is in the process of doing that and it obviously is going to take some time," Hopes said of Shami.

"This season is not yet over for him and we are aware."

Besides their woeful run of form, the Daredevils were in news when Gautam Gambhir stepped down from captaincy after losing six of their seven matches in the ongoing IPL.

"We have given ourselves very little room for error now. We sometimes got ourselves to winning positions and possibly a team that hasn't had much success over the last few years and they don't know what to do when they are in those positions.

"I have been involved in enough tournaments like these now. Over the last few years, I think there has been only one team that has made the semifinals on 14 points. So, 16 points is the magic number. But if you get onto that run and maintain that you will be one of the hot teams going into the play-offs, like Mumbai Indians few years ago," Hopes said, still preferring to be optimistic.

Young Shreyas Iyer is now being tasked with leading the embattled outfit and when asked about the change, Hopes said, "Shreyas loves it, he does really enjoy being in senior position, he is very clear, he is pretty clear about what he wants to do, same with GG (Gambhir).

"He has got his own ideas on tactics which is great. Worse case we mat lose of couple of more games under a new skipper but I fully expect his batting to go up. He is playing beautifully at the moment."