Bengaluru: The Indian Premier League enters its eleventh year and brings with it a renewed sense of glitz, glamour and earth-shattering motion of money. As the eight franchises began their player acquisition through the auction, all the furore over a pending court case couldn’t stop Ben Stokes from hitting the big bucks. Rajasthan Royals made the England all-rounder top the money charts for the second year running at Rs 12.5 crores. From a homegrown perspective, K.L Rahul and Manish Pandey stole the limelight by ending up the joint most-expensive Indian players at Rs 11 crores each. 110 players went under the auctioneer Richard Hadley’s hammer and 78 were sold, but at the other end of the spectrum, household names like Chris Gayle and Lasith Malinga were among those left unsold. Uncapped players are a massive fixture in this year’s auction with over Rs 250 crores being disbursed on these precocious talents.

Let’s take a look at how franchises fared on Day 1... Sunrisers make hay
Sunrisers have gone about their business with a definitive plan in mind. The Tom Moody-coached unit have 16 players with Rs 7.95 crores left to spend on completing a squad that boasts experience and talent in every department. They’ve got openers in David Warner and Kane Williamson, finishers in Yusuf Pathan and Carlos Braithwaite, a wily spinner in Shakib Al Hasan and a proven wicket-taker in Bhuvneshwar Kumar.

Mumbai get new core
The three-time champions will once again field a pace attack that contains foreign flavour in Bangladesh seamer Mustafizur Rahman and the Australian Pat Cummins. The duo will complement Jasprit Bumrah well, but with only nineplayers brought in and Rs 15.8 crores left, the Mumbai Indians need to draft in the numbers. Perhaps uncapped potential can be found on the cheap.

Youth and experience for Royals
With three millionaires in Ben Stokes, Sanju Samson and uncapped Jofra Archer, the inaugural edition champions have sifted through their choices carefully, but haven’t been afraid to blow the cash. Archer is certainly one to look out for after the pacer took the Big Bash by storm, and is eager to make his bow on Indian soil. With Rs 23.5 crores left and slots to fill, they will seek to add steel to their already exuberant line-up.

Delhi believe in homegrown talent
Daredevils only have five foreigners in their 16-man squad thus far, placing their trust in the depth of homegrown talent that IPL 11 boasts. In Gautam Gambhir they have an able leader who will be able to get the best out of a team, whilst pacers Kagiso Rabada and Chris Morris make for a deadly duo. With Rs 12.3 crores left to spend, there’s still money for a few more shrewd additions.

Super Kings turn to old warhorses
CSK have taken the route of wisdom and gone for players that made up their core when they last featured in 2015. The picks such as Faf du Plessis, Harbhajan Singh, Dwayne Bravo and Shane Watson show just how much coach Stephen Fleming backs his warhorses to come up with the goods.

Kings go gung-ho
Preity Zinta was like a spirit possessed during the marquee stage of the IPL auction. The team owner admitted to bidding for virtually every player out there in a reversal to the waiting game that has failed her in previous auctions. R. Ashwin was snapped up for Rs 7.60 crores, and the retention of the evergreen David Miller and Marc Stoinis adds bite to either end of the squad.

KKR go all out
If there was one franchise who splurged it would be KKR. The team boasts six millionaires and the relatively frugal signing of U-19 World Cup star Shubman Gill does little to balance out the big-ticket names like Dinesh Karthik, Chris Lynn, Mitchell Starc and Robin Uthappa.

RCB — Thrifty but effective
When birthday boy Daniel Vettori pulled a rabbit out of his hat and signed Quentin de Kock for Rs 2.8 crores at a time when Indian wicket-keepers were exorbitant, it showed that RCB were not merely throwing the cash around. RCB bought explosive Kiwi batsman Brendan McCullum and Moen Alli without being open-handed and have spread the finances evenly. 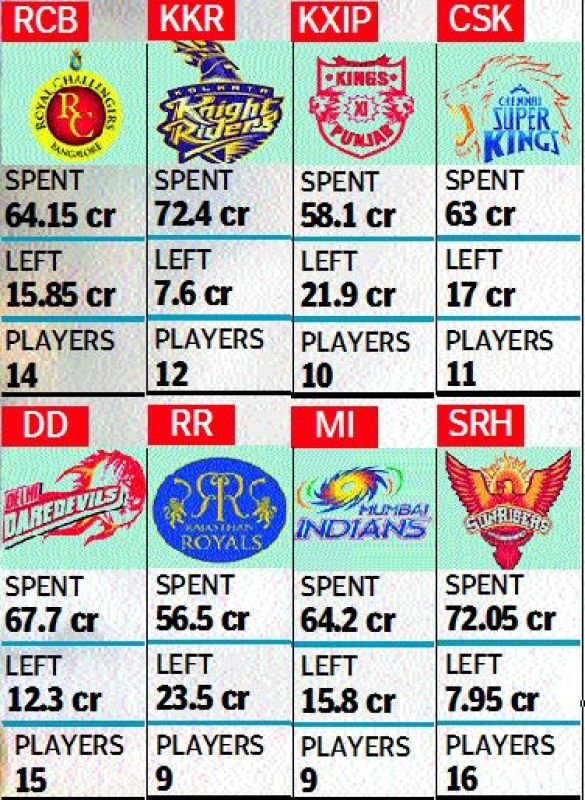