This banter between Sourav Ganguly and his daughter Sana is unmissable!

As soon as BCCI president shared a picture after the conclusion of the day-night Test between India and Bangladesh, Sourav Ganguly and his daughter Sana engaged in some funny banter on Instagram. (Photo: Instagram)

New Delhi: As soon as BCCI president shared a picture after the conclusion of the day-night Test between India and Bangladesh, Sourav Ganguly and his daughter Sana engaged in some funny banter on Instagram.

Ganguly had posted a picture from the presentation ceremony in which he can be seen sporting a serious look.

To this pose, Sana posted a comment saying: "What is it that you're not liking".

Ganguly, popularly known as 'Dada' quickly answered back: "that ur becoming so disobedient".

However, after Ganguly's comment, Sana came back with a witty reply, saying she is learning from him on how to be disobedient. 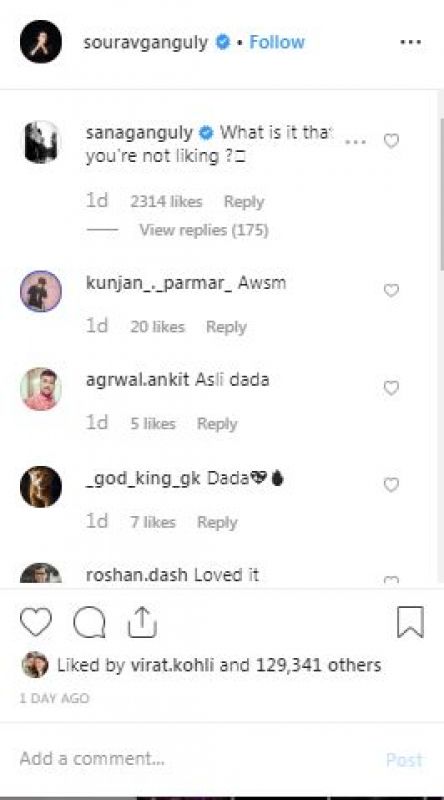 The 47-year-old Ganguly had a busy last week as he arranged India's first-ever day-night Test.

During the opening day of the match, Bangladesh Prime Minister Sheikh Hasina, West Bengal CM Mamata Banerjee rang the Eden Gardens bell to kick off the proceedings of the match.

Then on the same day, Indian cricketing legends comprising of Sachin Tendulkar, Mithali Raj, VVS Laxman, Kapil Dev took a lap of honour at the Eden Gardens during the supper break.

The day-night Test which began on Friday, ended up as a three-day contest as India defeated Bangladesh by an innings and 46 runs.

With this, India won the two-match series 2-0 and consolidated their position at the top of World Test Championship (WTC) standings with 360 points from seven matches.