Sudhir Kumar Chaudhary has been one of Sachin Tendulkar's greatest fans over the years. (Photo: AP)

Dubai: Team India will be vigorously supported by its most ardent fan, when they travel to England to take part in the ICC Champions Trophy, which gets underway next month.

Sudhir Kumar Chaudhary, who has become popular after following Team India around the globe in most of their international matches, is travelling to UK with his new passport issued to him last month.

Chaudhary has been one of Sachin Tendulkar's greatest fans and has been granted UK visas (within three days), which he applied in fast-track by paying Rs. 26,000 (the rate for normal mode is Rs. 7,500).

Interestingly, he attached a letter from his God (Sachin Tendulkar) for the visa.

"I am writing to confirm that Mr. Sudhir Kumar Chaudhary has been an ardent supporter of the Indian Cricket Team and has become an unofficial mascot of the team due to his enthusiasm," Sachin has said in a general letter.

"His commitment has been relentless and whenever the team is on tour, he goes to great lengths to be present for the games at his own expense."

"It is unfortunate that someone from a modest background, who is supporting Indian cricket without accepting any help from the players, is made to face numerous hardships to enable him to follow his passion

Sudhir's expenses in England will be borne by Abhilash Thapliyal – a former RJ and a Bollywood actor.

Sudhir was present at the theatre (PVR, Versova), during the premier of Sachin Tendulkar's biopic, on Wednesday.

"It is an amazing movie," Sudhir said over telephone. The movie is being released on Friday. 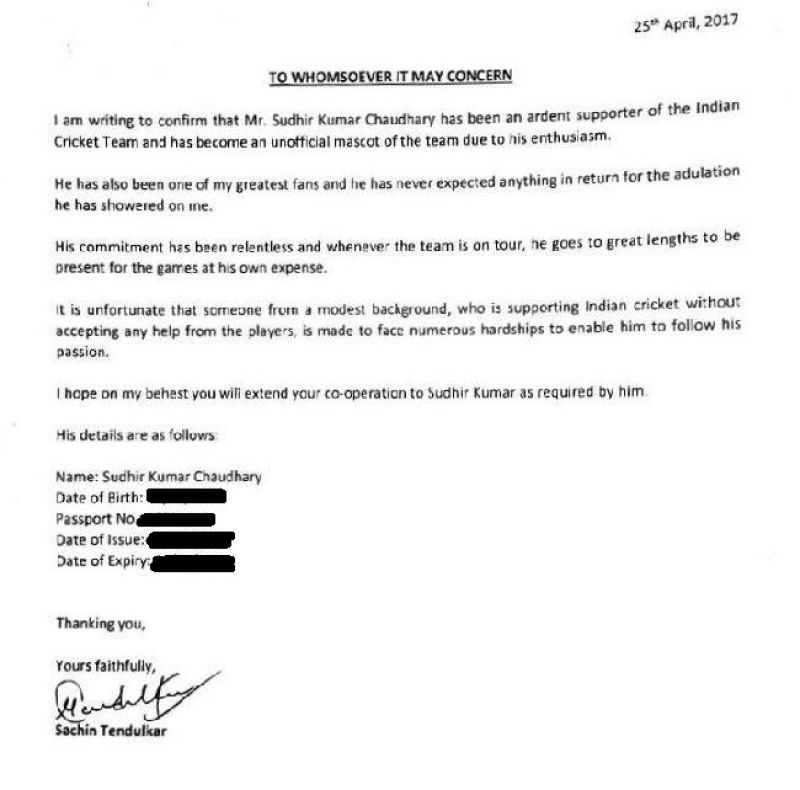 Rahul Dravid destined to be the next Team India coach?

Suspended IPL to be finished in United Arab Emirates