Hardik Pandya is ‘taken’ by a sexy Jamshedpur model

Mumbai: Baroda cricketer Hardik Pandya turned into an overnight sensation after his last over that sealed the victory for India against Bangladesh in a do-or-die situation in the ICC World T20.

The Group 2 encounter at the M Chinnaswamy stadium turned out to be a memorable one for 22-year-old Pandya, who made his international debut two months ago against Australia in Adelaide.

Skipper MS Dhoni has been quite vocal of Pandya’s heroics and the youngster’s inclusion in the side seems to have solved India’s conundrum of having a bowling all-rounder.

Check out: Poonam Pandey’s ‘small gift to India’ after win over Bangladesh

However, it’s not on the field but off it that Pandya has been making waves recently. According to media reports, the Mumbai Indians star has been seen with well-known model from Jamshedpur Lisha Sharma, currently living in Kolkata.

The duo claim to have known each another for one year and are ‘good friends’. They were spotted around several malls in Kolkata and once were also seen dining at the Taj Bengal.

Watch: Pakistan model Qandeel Baloch comes up with yet another steamy dance

Earlier, Lisha had posted an image of her with the all-rounder on her Instagram account (now deleted), calling him her ‘boo’ and adding that she found him to be “dating material”. 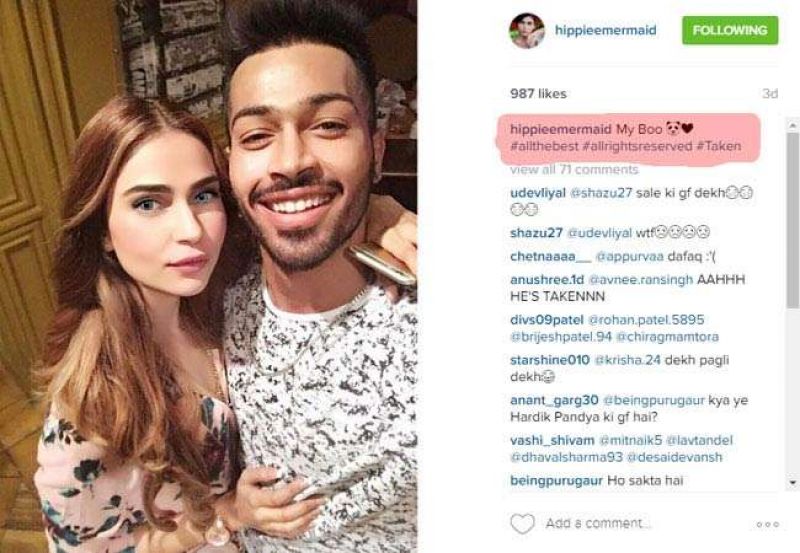 The post was also had hashtags #AllRightsReserved and #Taken, speculating if the two are very much together. (Photo: Instagram)

In a report Lisha was asked to share her thoughts about Pandya. “A gem of a person, chivalrous, very grounded, calm and perfect,” she said.

She also revealed what Pandya was going through after bowling that crunch over. “No, he was so very calm. That’s the thing I like about him. In the last over he was smiling, so I asked him, ‘Tum smile kaise kar rahe thhe?’ He said if he felt the pressure at that point then the pressure would have shot up,” she said.

“See, the whole of India wants to date him. So obviously, he is dating material,” she added.