Ind vs NZ: India close in on big win in historic 500th Test

After the batsmen helped India secure 433-run lead, R Ashwin came to the party as he dismissed three New Zealand batsmen to set a platform for India’s win on day 5. (Photo: PTI)

Kanpur: India positioned themselves for a massive win in their 500th cricket Test by polishing off the New Zealand top-order after setting them a colossal 434-run target, propelled by unbeaten half-centuries from Rohit Sharma and Ravindra Jadeja here on Sunday.

New Zealand were tottering at 93 for four in their second innings with the exuberant Luke Ronchi (38) and the steady Mitchell Santner (8) at the crease when stumps were drawn on the fourth day.

The Black Caps require a history-defying effort to win the Test as no team has ever chased such a daunting target. They still need 341 runs and batting three sessions on a fifth-day wicket is not something visiting teams have achieved often in India.

Earlier, negotiating a spin-friendly track with aplomb, Rohit (68) and Jadeja (50) raised a 100-run stand in quick time after India lost four wickets, starting the day at 159 for one.

Left-arm spinner Mitchell Santner dismissed two batsmen while Ish Sodhi and Mark Craig claimed a wicket apiece but only to see the next Indian pair hammer them around the park as India declared their second innings at 377 for five at the stroke of tea.

Rohit and Jadeja never looked uncomfortable on the deteriorating fourth-day Green Park track, entertaining the Sunday crowd with some quality strokes, including three sixes by the left-hander.

However, when Indian spinners bowled, New Zealand batsmen were were all at sea on the pitch as off-spinner Ravichandran Ashwin removed both the openers  -- Martin Guptill (0) and Tom Latham (2) -- in the space of five balls to cause ripples in the rival camp.

Guptill was first to go by handing an inside edge to forward short-leg fielder while left-handed Latham was caught in front of the wicket while defending.

Ashwin could have got Kane Williamson (25), when he was on 16, had Umesh Yadav held on to a tough chance at square leg boundary but the off-spinner did not have to wait for long to see the back of the New Zealand captain as he trapped him soon and completed a milestone of 200 Test wickets.

He is only the ninth Indian to get that figure but fastest among all, doing it in his 37th match. He bettered Harbhajan Singh's record, who took 46 matches. 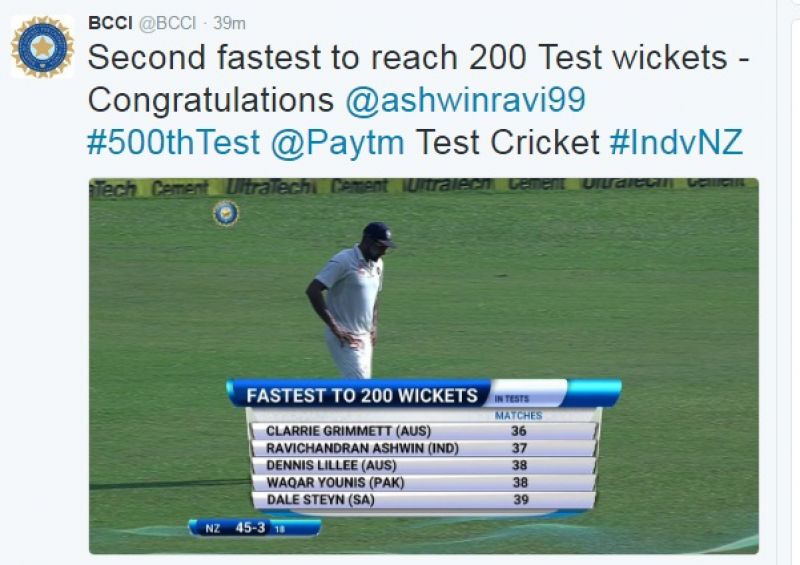 R Ashwin is the second fastest in the world behind Australian Clarrie Grimmett (36 matches) to take 200 Test wickets. (Photo: BCCI/Twitter)

A run out was the last thing that New Zealand needed but Ross Taylor blundered by not grounding his bat even when he had made the crease, attempting a couple of runs with Ronchi.

Ronchi had pushed the ball through covers and there was no scope of a run out. However, Yadav's direct hit converted it into a wicket out of nothing. Taylor would certainly rue the silly mistake.

This happened after Ashwin saw a second chance grassed by the fielder off his bowling. Ronchi (on 3 at the time) drove him uppishly, edged the ball high in the air, but Murali Vijay could not catch it while running backwards.

Earlier, after losing three wickets in the opening session, India also lost Ajinkya Rahane (40) but Rohit and Jadeja ensured that the hosts do not suffer any more reversal after that.

They raised an unconquered 100-run stand for the sixth wicket and the moment Jadeja got a single off Santner to get to his half-century, Indian captain Virat Kohli declared and umpired called the tea break.

Jadeja celebrated his milestone by wielding his bat like a sword before the two batsmen walked off the field.

Rohit and Jadeja played in contrasting fashion with the left-hander being more aggressive even as they scored 125 runs in the second session after Rahane was trapped by Santner.

300-run mark by adding 93 runs to the overnight total.

Except for two overs, Williamson had his spinners operating from both ends and each one of the three spinners delivered a wicket apiece.

Vijay and Pujara batted for about 10 overs together before Santner broke the 133-stand between them by trapping the former. Vijay played for turn, missed and the ball struck his pad before hitting the outside edge of his bat. He could add only 12 runs to his overnight total.

Kohli walked in to a boisterous welcome by the crowd and pulled a short one from Sodhi to mid-wicket boundary. The New Zealand spinners managed to turn a few balls, creating some doubts in the minds of the Indian batsmen. Kohli and Pujara played on merit of the balls and found occasional boundary. It was not easy find quick boundaries.

Off-break bowler Mark Craig ensured that Kohli does not stay for long at the crease. The home captain attempted a sweep but just managed a top edge that flew to deep mid-wicket where Sodhi took the catch.

Kane Williamson persisted with Santner and Craig for some time before bringing back Sodhi. The leg-break bowler ended Pujara's stay at the crease by having him caught at slips.

The ball pitched outside leg, Pujara tried to defend but it turned sharply, took an edge and went straight to Ross Taylor, who took a low catch.

Craig troubled Rahane a lot and almost had him caught in space of three balls but he survived. One chance went abegging in leg slip and the other at the short midwicket.

However, Rahane was comfortable against Sodhi, driving him nicely on the front foot. Rohit smashed Sodhi for a four and took India's lead to 300-run mark with a single off Craig. 15 minutes before the lunch break, Williamson handed the ball for the first time to paceman Neil Wagner but the Indian batsmen saw him and others through to the lunch.