The likes of Shaun Marsh, Matthew Hayden, Sachin Tendulkar, Chris Gayle and Michael Hussey — all took the Orange Cap honours but failed to lay their hands on the trophy the same season. (Photo: BCCI)

If there is something that can jinx Virat Kohli from translating his marauding form into a coveted IPL crown, it could well be the curse of the Orange Cap. In the history of the cash-rich league, the winner of the Orange Cap — given to the highest run-getter of the season — has gone on to lift up the trophy in the same season just once.

The likes of Shaun Marsh, Matthew Hayden, Sachin Tendulkar, Chris Gayle and Michael Hussey — all took the Orange Cap honours but failed to lay their hands on the trophy the same season.

However, scoring 660 runs in 16 innings, Kolkata Knight Riders’ Robin Uthappa became the first player to achieve the grand double in 2014 and as things stand now, Kohli and his RCB are primed to end their long and agonishing title wait.

Kohli has been in marvellous form this season, having already scored 919 runs in 14 innings and enjoying an astonishing average of 91.90 with four centuries and six fifties to boot. 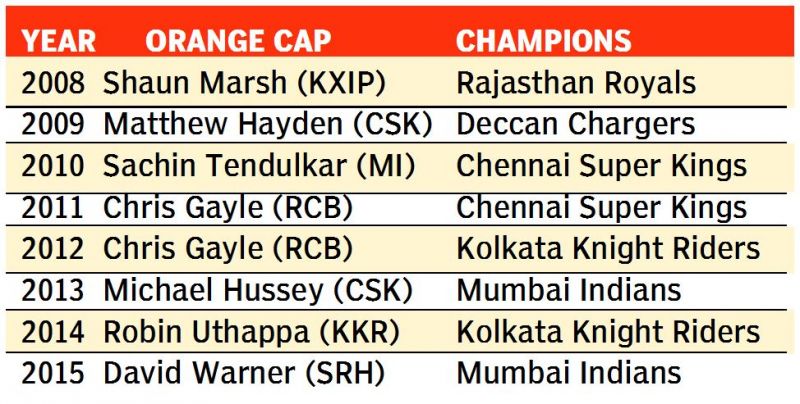 His nearest competitor for the Orange Cap is last year winner David Warner with 658 runs. Former India wicket-keeper batsman and current commentator Deep Das Gupta has no doubt that RCB would go all the way this season.

Has any of the previous Orange Cap winners scored more than 900 runs in a season? No. Virat, no doubt, is on his way to greatness. I think RCB can win the title. It would be the perfect way to cap of Kohli’s amazing run. With Virat, I feel he is not the one who has penchant for numbers. After 20 years, when he sits back, I think he will be counting how many trophies his team has won than the numbers he has accomplished,” Gupta told this newspaper.

Also Read: Chahal apologises to AB de Villiers after pouncing on him

Though Kohli single-handedly shouldered the team from brink of elimination into play-offs, Gupta believes RCB are not just dependent on Kohli.

“The point is others have performed as well, but such is the magnitude of Virat’s knocks that others were overshadowed. You have ABD and K.L. Rahul. You can’t just ignore the contribution of others. Gayle is beginning to get into the groove. Yuzvendra Chahal is now the purple cap holder. Jordan, Watson have fired at the death. The second half of the IPL has witnessed RCB as a complete match-winning unit,” he added.