Harbhajan Singh with his fan.

The irony was hard to miss when veteran Harbhajan Singh was snapped up by Chennai Super Kings to fill in for local star Ravichandran Ashwin. As the tall Chennai off spinner had replaced Harbhajan in Dhoni’s Team India, many Super Kings fans were not too pleased about the management’s choice at the auction. 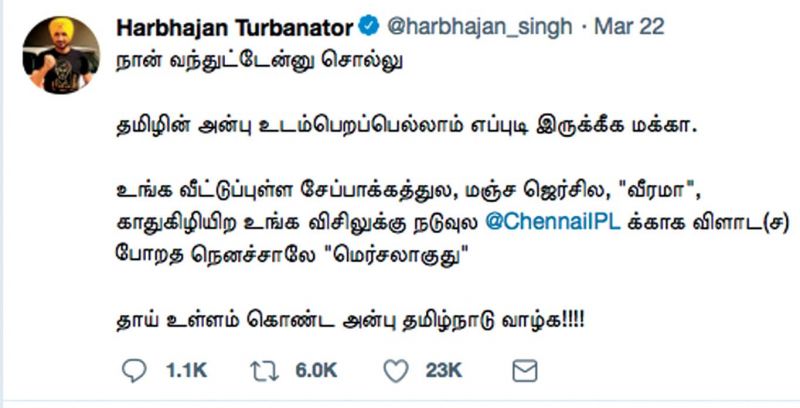 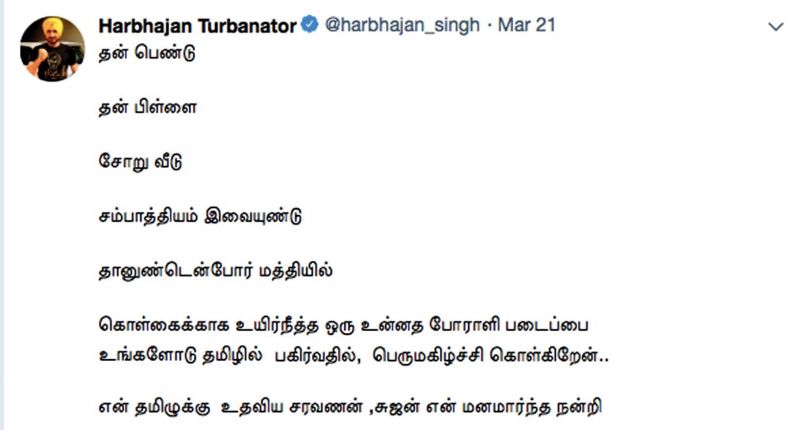 Though it emerged that the pick was M.S. Dhoni’s personal choice, Bhajji had an onerous task in winning over the local fans off the field before he could step into the Chepauk stadium wearing the yellow jersey.

How the ‘Turbanator’ from Punjab has now become a darling of not just CSK fans, but also of the entire southern state on social media is an interesting story.

The reason behind Harbhajan’s surge in popularity is his frequent tweets in Tamil and the man who is scripting those poetic words is an engineer from Chinnalapatti (in Dindigul district) — P. Saravanan.

The 27-year-old Saravanan has been an ardent fan of Harbhajan ever since the off-spinner performed a hat trick in the epic Kolkata Test of 2001. As Saravanan stood as a strong defender on social media from those who trolled Harbhajan time and again, the cricketer was bowled over by the fan’s sincerity.

“I finally met my idol when he had come for a Ranji match in Dindigul. Since then, our relationship has gone from strength to strength. Now he treats me like his own brother. The most memorable day in my life was when Paji took to Twitter to acknowledge me as his No.1 fan,” said Saravanan who is currently working in Abu Dhabi.

Saravanan said Bhajji’s interest in Tamil was genuine and not a publicity stunt for his IPL journey for CSK. “His first Tamil tweet — a Pongal wish — was posted much before the IPL auctions. During the Chennai floods of 2015, he provided monetary support to those affected without making it public. After seeing the recent responses from his Tamil fans, he wants to do more social initiatives. And whenever I script a tweet, he doesn’t post it blindly. He asks me to explain and even improvises on it. I am just glad that Bhajji is taking Tamil to wider audiences,” said Saravanan.

Kings of marketing
Doubts may have lingered over Chennai Super Kings’ brand value when they returned from two-year suspension following the IPL betting scandal. But when they pulled off a coup by retaining M.S. Dhoni ahead of the auctions, the franchisee knew that selling the ad space on the yellow jersey would be a cake walk.

As expected, CSK quickly filled up the space. “The fact that we sold off all endorsement deals even before the retentions were announced underlines CSK’s brand value. It’s a true reflection of the confidence the brands have in CSK as a franchisee,” Dhoni said recently.

IPL season 11 is still two weeks away, but Chennai Super Kings have already beaten other teams off the field with their promotional campaigns. Dhoni & Co. who have begun their training sessions at the M.A. Chidambaram Stadium are also sweating out in front of cameras for various promo shoots for their sponsors.

The photo of Dhoni, Suresh Raina and Ravindra Jadeja playing Nadhaswaram went viral on social media. In another shoot, the likes of Harbhajan, M. Vijay and Dwayne Bravo were seen dancing after leaping out of an autorickshaw. CSK have 3.95 million followers on twitter and the franchisee is making full use of them. And the fun the cricketers are having during the promo shoots has led to early season bonding among the stars. CSK is moving like a family and is all ready to kill the IPL season with their cricket too.

Mitchell Marsh in, brother Shaun out of Australia central contracts

Quality of cricketers not the same any more: Abdul Razzaq