Rohit's 55-ball knock was laced with seven boundaries and three maximums. Yuvraj Singh too chipped in with a handy 15 runs while Raina scored 13. (Photo: AP)

Here's how the action unfolded:

India win first Asia Cup match! Bangladesh could not do anything much as 50 runs were needed in the last over. India next face Pakistan on Saturday.

India and Rohit overpower Bangladesh in the 1st Match of #AsiaCup by 45 runs - https://t.co/Ju4CN1CMI8 #BanvInd pic.twitter.com/2qsDFrAZZ8

India on their way to victory! Bangladesh needs 50 runs from the last over.

Jadeja keeping it tight! The match is almost over for Bangladesh as they need 59 runs from the last two overs.

Two good Nehra! Ashish Nehra missed out on a hat-trick after picking Mahmudullah (7) and skipper Mortaza (0). It's all India now!

Smart Jadeja! Although two boundaries were scored in this over, it looks like the match is slowly tilting towards India. Jadeja over going for 11 runs.

Rahman departs! Hardik Pandya has picked up the danger man Rahman (44) as Bangladesh are in deep trouble.

Ashwin finishes off! Ravi Ashwin has finished his four overs with 1-23.

Rahman carries on! Rahman struck yet another six off the Ashwin over.

Bangladesh sense urgency! Indian bowlers are not giving away any runs and Bangladesh batsmen are sensing the need to go for the big shots. Required run-rate is now 10.81.

Ashwin attacks! Bangladesh's Sabbir Rahman welcomed Ashwin with a boundary but India's offie came back strong, the 8th over going for 6 runs.

Pandya not giving away anything! Hardik Pandya is working his magic with the ball, the 7th over going for 5 runs.

Difficult Bumrah! Young Bumrah is proving to be a huge problem for Bangladesh batsman as they are trying it difficult to read his action.

Bumrah strikes! Jasprit Bumrah has struck next for India sending Soumya Sarkar back for just 11 runs.

Nehra nails it! Ashish Nehra got the better of Mohammad Mithun knocking his off stump with a beauty. Mithun departed after adding just one run to Bangladesh's run-chase.

Stingy Bumrah! After giving away from a boundary in the first delivery Jasprit Bumrah bounced back strongly giving away just 6 runs in this over.

Nehra on target! Ashish Nehra is bang on target swinging the ball to perfection.

Put in to bat, India lost Shikhar Dhawan, Virat Kohli and Suresh Raina in quick succession after Indian batsmen were struggling to come to terms with a green Pune-like wicket at the Shere Bangla stadium.

Rohit's 55-ball knock was laced with seven boundaries and three maximums. Yuvraj Singh too chipped in with a handy 15 runs while Raina scored 13.

For Bangladesh Al-Amin Hossain was the pick of the bowlers with 3-37. Mustafizur Rahman had a hard day at the office going for a run-a-ball in his spell of four overs.

Dhoni finishes off in style! This over was an action packed one with India losing both Rohit (83) and Pandya (31). However, skipper MS Dhoni finished off the innings in style with a huge maximum.

Mustafizur comes back strong! Bangladesh rookie pacer has produced a good over at the depth giving away just 8 runs.

Pandya fires! Hardik Pandya has put up a superb show striking the ball with ease scoring two boundaries in this over.

Rohit gives it all! 21 runs came from the Mustafizur over after Rohit and Pandya are swinging things India's way.

Rohit on fire! Rohit Sharma is taking Bangladesh pacers to the cleaners striking two boundaries and a maximum in this over.

Rohit on the attack! Rohit Sharma has shifted gears and struck the first maximum of the match with a beautifully timed shot.

India bank on Rohit! The pitch is turning out to be a nightmare for Indian batsman. But Rohit looks set but is unable to score big.

Shakib into the attack! Veteran Bangla spinner Shakib Al Hassan is not giving away any runs, India finding it hard to score.

Spin trick! Mahmudullah has stuck with the plan and cleared Suresh Raina (13). India in trouble.

Raina, Rohit steady! Raina and Rohit have taken stock of the situation after India lost two vital wickets in the start.

Raina fires! Suresh Raina seems to have taken a positive approach to the situation firing two boundaries in this over.

India not connecting! Mustafizur Rahman introduced into the attack was received with solid aggression from Kohli but India's swashbuckling batsman was unable to connect.

Bangladesh firing all guns! Back for his second over, Taskin Ahmed is not giving away any runs, leaving Rohit and Virat Kohli on the backfoot. 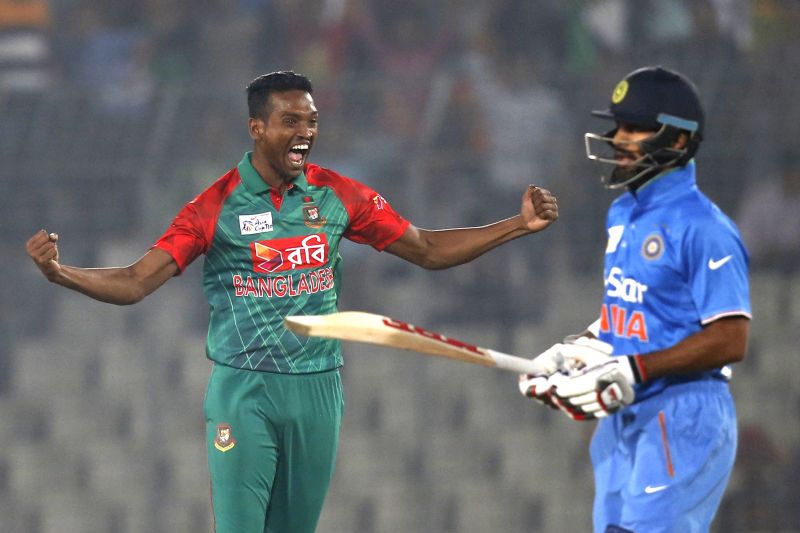 Taskin on target! Starting off proceedings for Bangladesh Taskin Ahmed was on target while India openers Rohit Sharma and Shikhar Dhawan were strong in defense.

Dhaka: With rain playing hide and seek, hosts Bangladesh and Mahendra Singh Dhoni-led Indian Cricket Team are all set to clash in the Asia Cup tournament opener here at the Shere Bangla stadium today. Bangladesh skipper Mashrafe Mortaza has won the toss and elected to bowl.

India already have a fair bit of momentum with them, having beaten Australia and Sri Lanka in bilateral series and Dhoni will look to carry those good vibes forward as teams gear up for the ICC World T20 next month.

A title victory for Team India, who start favourites, would be a huge confidence boost ahead of the main event. However, India have to be wary of Bangladesh, who tripped them up spectacularly the last time these two teams met in limited overs format.

#TeamIndia Captain @msdhoni inspects the pitch ahead of the #IndvBan match #AsiaCup pic.twitter.com/Ccnbhf9gJy

Here's how the pitch is looking for the #IndvBan match #AsiaCup pic.twitter.com/ZBxkWLl6ZC