Virat Kohli reclaimed the top spot in the latest ICC Test Rankings after his brilliant show in the third Test against England, where he scored 97 and 103 runs in the first and second innings respectively. (Photo: AFP)

Nottingham: Virat Kohli has notched up yet another high in his ever-so-improving cricket career as he reached the career-best rating points (937) in Test cricket to reclaim the top spot in ICC Test rankings for batsmen.

Kohli, who had jumped to the top spot following his solid show with the bat in the opening Test against England in Edgbaston, lost his numero uno position after a below-par outing at the Lord’s in the second Test.

However, the Indian cricket team skipper reclaimed the top spot after the match-winnings scores of 97 and 103 in the first and second innings of the third Test against England in Nottingham. 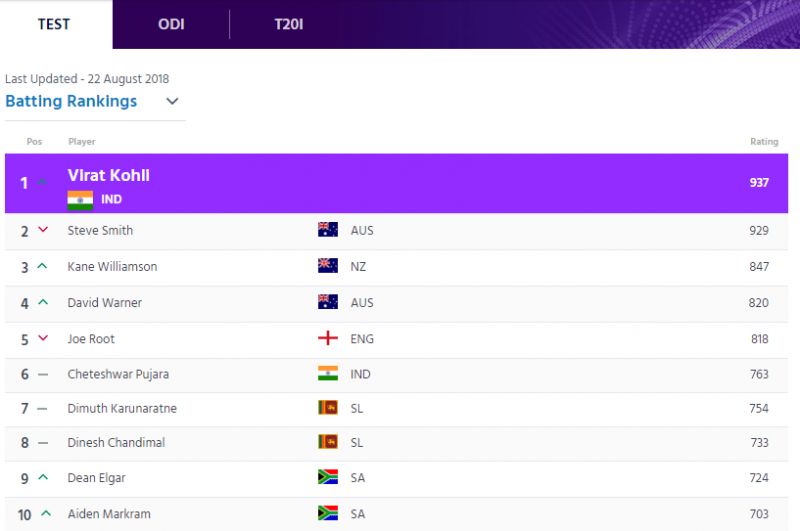 Cheteshwar Pujara remains the second highest ranked India batsman in the list in sixth position, while Ajinkya Rahane (up four places to 19th), Shikhar Dhawan (up four places to 22nd) and all-rounder Hardik Pandya (up eight places to 51st) have moved up after useful contributions at Trent Bridge.

Pandya has also reached the 51st spot in the bowlers' rankings, gaining 23 slots to reach his career-best position after a crucial five-wicket haul in the first innings.

His fellow fast bowler Jasprit Bumrah's five-wicket haul in England's second innings has also lifted him to a career-best 37th position after a gain of eight places.

For England, Jos Buttler's valiant 106 in the second innings has lifted him 22 places to 47th position.

Another significant gainer for England in the batsmen's rankings is Adil Rashid, whose unbeaten 33 in the second innings has seen him gain eight slots to reach 116th position.