Virat Kohli and Anil Kumble enjoyed a successful captain-coach partnership, with India having a 70.59 per cent win percentage in Test cricket under them. (Photo: AFP)

Mumbai: With the Virat Kohli-Anil Kumble saga rolling into India’s tour of West Indies, the India captain has done something that could serve as a further indicator of the marred relationship between the two.

Kumble, who was appointed as the head coach of the Indian cricket team in June 2016, was welcomed to his new role by the then Test captain Virat Kohli. 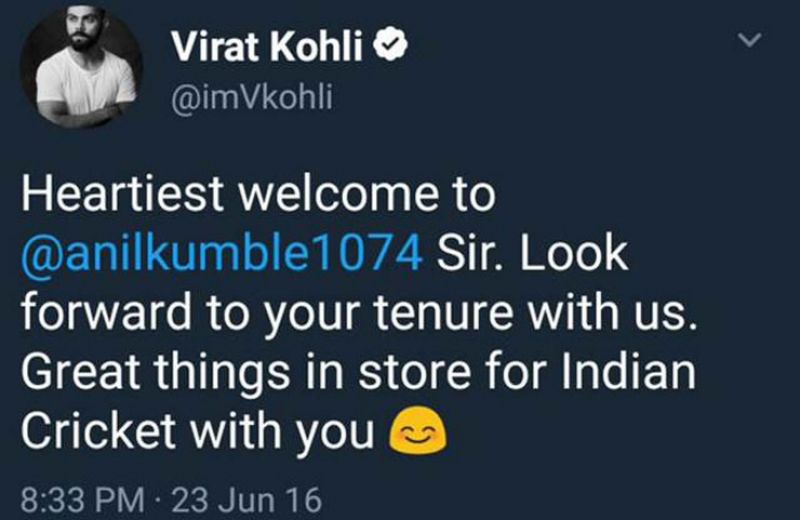 However, soon after Anil Kumble came out with a statement saying that the “Captain had reservations with my 'style' and about my continuing as the Head Coach”, Kohli deleted his welcome tweet for Kumble from one year back.

Interestingly though, Kumble, who had thanked his own tweet, thanking Kohli for his wishes.

Thanks @imVkohli looking forward to working with you and team India https://t.co/X39qp7WDKj

The duo had enjoyed a successful partnership on the pitch, with Team India having a 70.59 per cent win percentage in Test cricket. Under Kumble, India had lost only one bilateral series – a two-match T20I series, which they lost 1-0 with the Windies winning the first match by a run, while the second game was washed out.