Mumbai: Anurag Thakur took guard as the president of BCCI (elected unopposed) with Ajay Shirke as the Honorary Secretary here on Sunday. The 41-year-old Thakur, second youngest to the throne after Fateh Singh Gaekwad who took over at 33 in 1963, said the cricket board started the reform process long back and is looking at the practical side of the Supreme Court-appointed Lodha Committee.

“It can be a challenge for you, but for me, it is an opportunity. We are not running away from the Lodha recommendations. I started reforms 15 months back with the late Jagmohan Dalmiya and then, Shashank Manohar. I have the guidance of both. The matter is now with the court and I am sure they will take the right decision. No institution is 100 per cent perfect. When I started as an administrator (in Himachal Pradesh), I just had an office and a typewriter and look now, we have built one of the beautiful stadiums in Dharamshala,” said Thakur at the BCCI headquarters.

Manohar stepped down as the BCCI president recently to be elected as the independent chairman of ICC. Thakur, who served office earlier as the Secretary, got the signature of all six East Zone units in his presidential nomination on Saturday to become the unanimous choice for the top post.

Though BCCI will have to deal with Supreme Court’s decision on their stance towards Lodha proposal, there are areas where they scored lately.

“BCCI hosted the ICC World Twenty20 and IPL, shifted matches at the last minute when required. We were applauded by cricket boards globally. The women’s cricket team is also under the contract system,” Thakur added.

Thakur, also a BJP MP, followed Raj Singh Dungarpur’s footsteps. He is the second first-class cricketer to turn BCCI president; he led Himachal Pradesh against Jammu and Kashmir in 2000-01 season as a right-handed batsman and off-spinner.

Revenue, IPL – why push it back?

Former president Manohar, now ICC chairman, declared his reservations regarding banning of advertisements between overs, which would reduce revenue for the board. Thakur seconded him stressing on the importance of IPL as a source of revenue in the context.

“Money to former cricketers, monthly or one-time, is dependent on the revenues earned. We pay our employees, state associations through advertisements. One needs to understand what IPL brings to the country. It is a win-win situation. Both the state and the centre gain out of it, so why are we pushing it?

“IPL is successful because of Indians, don’t force us to take it outside; that will be a loss for all. We don’t want to take away water from anyone’s household, we are here to contribute and not to take away things. Do not blame cricket for it,” said Thakur.

The board is planning to go green in terms of stadiums and the infrastructure.

“There will be sewage treatment, rain-water harvesting. All this will be delivered within one year,” Thakur announced.

The board has marked Rs 100 crore for the ‘green’ initiative.

The state associations have been asked to be active on social media so that they can further engage with fans.

“We will also ensure that a minimum of 10 per cent of the tickets are given free of cost for the children, women and differently-abled people. There will be a separate seating arrangement for the handicapped.

The cricket board has been in rough waters following the demise of Dalmiya and the resignation of Manohar. It remains to be seen whether Thakur’s promising words gain shape in the coming months

I think the BCCI environment is fine: Ganguly

Former India skipper and president of the Cricket Association of Bengal, Sourav Ganguly, believes Thakur will carry the legacy with flying colours considering he isn’t new to the board.

“He has been secretary for a while, he knows the job and he will take it forward. Indian cricket will be looked up to well. Every job comes with challenges; whether you open the batting in a Test match against the best fast bowling attack; whether you are the president of the BCCI or an association,” said Ganguly. 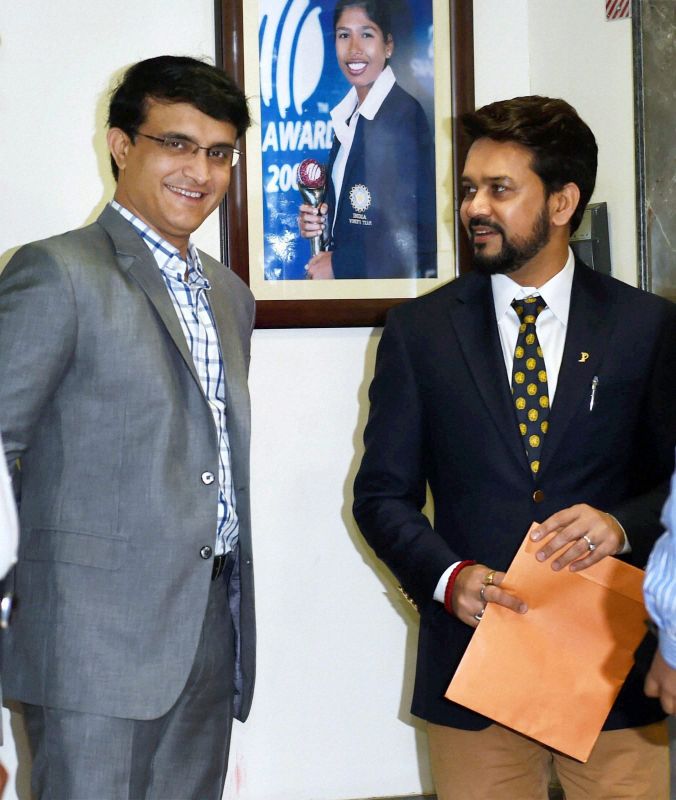 Ganguly, also BCCI Cricket Advisory Committee member, said the cloud over Supreme Court’s judgement on Lodha recommendations has not soured the environment within the board. Rather, innovations are on the pipeline.

“I think the environment is fine, whatever the court decides, we will have to deal with it. In the meanwhile, the board can carry on with the good work. Cricket is in good hands, players are looked after for 20 years, money has come into the game. IPL provides a platform to the world. Day-night Test cricket is a must and it will happen in India soon. Test cricket is the ultimate judgment of a player’s ability,” he added.