Amitabh Bachchan took to Twitter and hit back by thanking the Australian media for "accepting the fact that (Virat) Kohli is a winner and the president". (Photo: AP / Deccan Chronicle / AFP)

New Delhi: Legendary Bollywood actor Amitabh Bachchan has thrown his weight behind Indian skipper Virat Kohli, who was recently compared by an Australian daily with the US President Donald Trump.

In the article, the daily compared the Indian captain to Trump, saying that "Kohli has become the Donald Trump of world sport."

Bachchan, however, hit back in his own style by thanking the Aussie media for "accepting the fact that Kohli is a winner and the president". 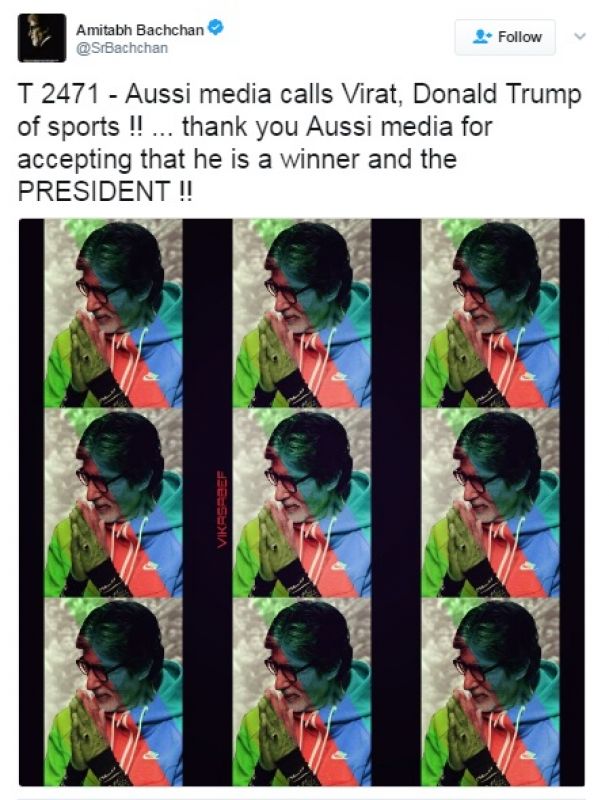 The article further stated that Kohli "has become a law unto himself" and accused him of spreading 'fake news'.

The piece is talking about Kohli's allegation that some members of the Australian team had disrespected Indian team physio Patrick Farhart during the Ranchi Test.

"It's funny all our guys ask about cricket as the first thing and you (Australian journalist) ask about something controversial," said Kohli during the third drawn Test in Ranchi.

"They (four-five of them) started taking Patrick's name. I don't know why. He's our physio. His job is to treat me. I don't find the reason behind it. I could not understand. You must ask why they have started taking his name," he added.

The two teams will be facing each other in the final Test of the of the Border-Gavaskar Trophy beginning March 25 at Dharamsala.

The series is currently leveled at 1-1 and it would be really interesting to see as to who emerges out as victorious.