Good, bad and ugly of IPL

A guard (circled) from the Agile Security services tries to charge spectators at the South Pavilion East enclosure as he drives them out even as they watch the post-match presentation ceremony of the Sunrisers vs Kolkata Knight Riders match at the Rajiv Gandhi International Cricket Stadium in Hyderabad on Saturday.

Hyderabad: Thanks to the Sunrisers, fans in Hyderabad were treated to an entertaining dose of cricket but the authorities could do well to set a few things right for future games at least.

The crowds at the Rajiv Gandhi International Cricket Stadium (RGICS) do not have a roof to protect them, come rain or shine. After altering the original plan of one going right around the stadium, every committee of the Hyderabad Cricket Association has ignored this area even as they got canopies over the south and north pavilion terraces that barely cover less than five per cent of the stadium’s seating capacity.

Next comes the rush/ crush in complimentary areas. Those with valid passes could not find seats in some games and could be seen sitting on the steps, which points to the possibility that more tickets were printed than seats available. 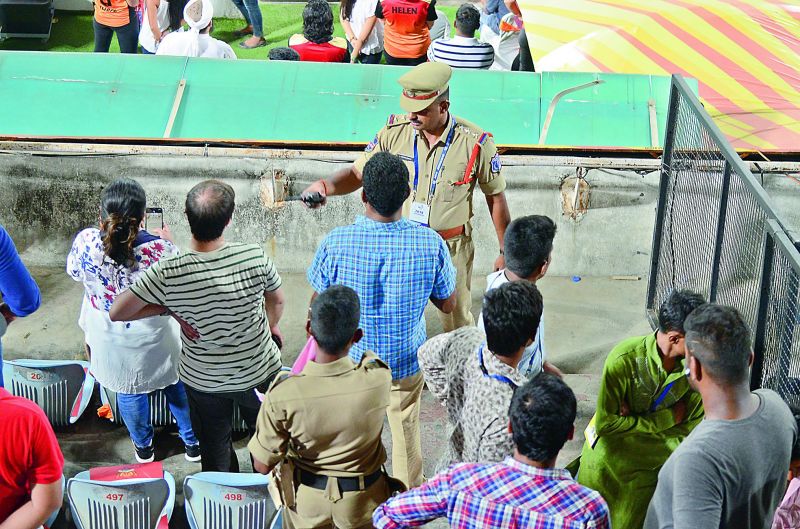 A policeman at the South Pavilion West seating orders spectators to clear the place as they watch the post-match ceremony at the RGICS in Hyderabad on Saturday.

Third, and the ugliest part is the high-handed behaviour of the men in uniform towards the paying public. It’s clear that the crowd is needed only during the game so that interested parties make money out of it. As soon as the match is over, they are rather rudely driven out by the posse of policemen as well as private security (Agile) personnel on duty, even as they watch the post-match presentation ceremony.

Series of unnerving whistles, threatening waves of clearout as well as physical intimidation in the form of baton charges have been witnessed. Inexplicable, as the spectators purchase the tickets and have every right to be there until prizes for the match are given away.

It’s time higher authorities — in the HCA as well as the Rachakonda Police Commissionerate, under whose jurisdiction the RGICS falls — reviewed the situation and pulled up errant officials to ensure such incidents are not repeated in future.