MS Dhoni headed straight to the 22-yard strip after dropping his kit bag and examined it minutely from both ends. (Photo: PTI)

Cuttack: The pitch at the Barabati Stadium, untested for about a year, and former skipper Mahendra Singh Dhoni attracted maximum attention on the eve of the T20 series opener between India and Sri Lanka here.

Dhoni headed straight to the 22-yard strip after dropping his kit bag and examined it minutely from both ends. 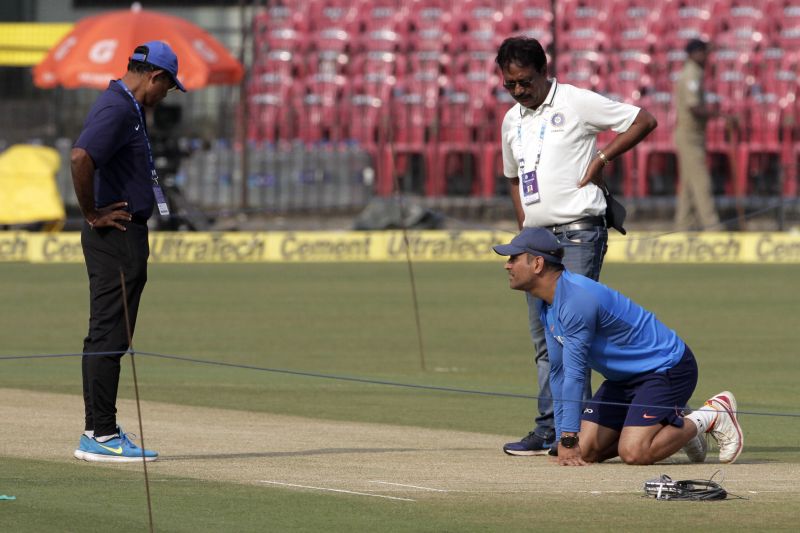 Moments earlier Rohit Sharma, who is standing in as captain in the absence of Virat Kohli, and coach Ravi Shastri had a close look of the pitch by removing the light green cover, which was in place to protect it from excessive drying.

But in an ODI, exactly 11 months ago, India and England aggregated more than 700 runs, with hundreds from Dhoni and Yuvraj Singh helping the team to a narrow win after it notched up up a mammoth 381 for six.

The pitch hasn't witnessed competitive cricket since then and to make matters worse, some football matches were played in the multipurpose stadium.

A few days ago, students from a club were made to use the pitch as a test event. According to an official, it was a two-paced wicket that aided bounce from one end.

He said, "Every effort is being made to produce a sporting wicket where at least 180 runs are scored."

He further said there would not be much dew to worry about.

Dhoni had the first feel of the surface. He had a brief net session and called a left-arm spinner to bowl at his pads. The World Cup winning former captain was the cynosure of India's two-hour training session as a crowd of about five- thousand turned up chanting 'Dhoni Dhoni'.

The Odisha Cricket Association had allowed free entry to some of the galleries opposite India's practice nets. The response was overwhelming as the galleries were all packed.

Having bagged the Tests series 1-0, India suffered a defeat in the first ODI before producing a 2-1 result. The second and third T20Is are slated to be held in Indore (December 22) and Mumbai (December 24).