The city has been witnessing frequent showers and Kolkata Met director Ganesh Das has blamed it on circulation over South Bengal. (Photo: AP)

Kolkata: The second ODI between India and Australia here on Thursday could witness another truncated match as the weathermen has not ruled out the possibility of intermittent showers, especially in the evening hours.

With rain threat looming large, the Eden Gardens remained under cover ahead of the second ODI. India took a 1-0 lead in the five-match ODI series with a 26-run win over the world champions Australia in the rain- affected first game in Chennai on Sunday. 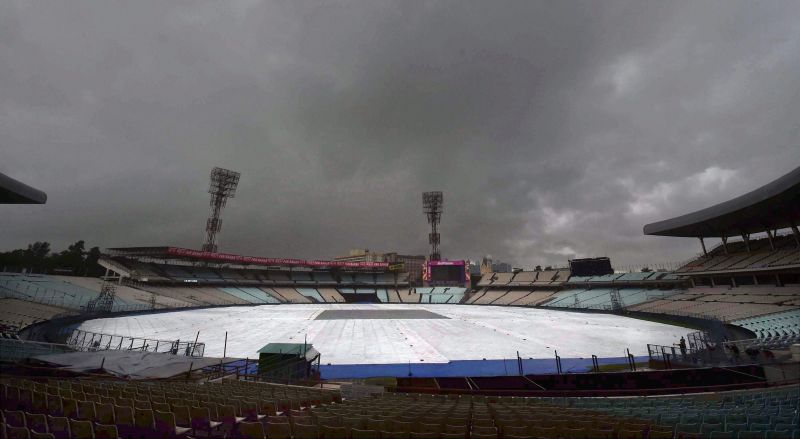 The city has been witnessing frequent showers and Kolkata Met director Ganesh Das has blamed it on circulation over South Bengal.

"By September 21, the circulation will be gone but in this month rain is a possibility especially in the evening. It may not however continue for too long," Das told PTI.

Hosting Australia for the first time since November 18, 2003, the Cricket Association of Bengal (CAB) is in no mood to take chances.

Former India captain Sourav Ganguly, who is the president of CAB, also inspected the conditions and was seen giving instructions while the ground remained under cover.

"The pitch and ground conditions is just perfect. It's an ideal condition what's required for an One-Day International contest but I cannot say whether it will rain or not," said CAB pitch curator Sujan Mukherjee, who's putting in hard yards despite flu for last two days.

He said he is unable to predict a score but promised a sporting wicket for the tie.

"Who would thought India to score 281/7 from being five down for 87 in the 22nd over. I cannot say they will make how many runs but the wicket will help both batsmen and bowlers," Mukherjee said.

Asked about the possibility of showers, he said: "We are equipped to cover the entire ground and there is enough machinery to clear up even if it rains but it depends on the intensity and duration."