Kolkata: Virat Kohli (55 not out) once again showed his class to steer India to six-wicket win over arch-rivals Pakistan in ICC World Twenty20 encounter at the Eden Gardens in Kolkata on Saturday.

The young Indian batsman held his nerve after Team India bowlers restricted Pakistan to a paltry total of 118 runs. The game was reduced to 18-overs a side affair after the wet outfield delayed the start of play.

While India stretched their winning streak to 11 against Pakistan in World Cups and World Twenty20, the Mahendra Singh Dhoni-led unit broke Pakistan's winning run at the iconic Kolkata venue.

Dhoni scores the winning run! There is something about MS Dhoni and scoring a winning run. He first smashes Irfan for a six to level the scores and then just dabs one to the leg-side to seal India's win.

Fifty for Kohli! What a fantastic knock this is from Virat Kohli. India under pressure and Kohli delivers once again.

No risk cricket! MS Dhoni and Virat Kohli take no risks as Amir returns to bowl. Four singles and then Kohli caps it off with a delightful four.

Kohli holds the key! Virat Kohli plays is sensibly as he does so many times. After scoring a boundary on the first ball of the over, deals in singles.

Wahab dismisses Yuvraj! Oh Yuvraj, what have you done! He tries to add pressure on Pakistan but gives an easy catch to Mohammad Sami in the deep.

Kohli makes a move! Virat Kohli has gone after Shoaib Malik. A six and a four, India score 14 runs off that over.

No drama! Shahid Afridi brings himself into the attack but bowls a rather loose over. No trouble for Kohli and Yuvraj.

Sami's double strike! Mohammad Sami has redeemed his stock as he removes Dhawan and Suresh Raina in his first over. India in a deep hole.

Dhawan under pressure! Mohammad Irfan offers no freebies as he troubles Dhawan. The Indian left-hander is trying hard to get out of the jail.

Amir removes Rohit! Rohit Sharma tries to go after Amir but fails. Shoaib Malik does a fine job holding onto that skier.

Rohit targets Irfan! Rohit Sharma wastes no time as he targets Mohammad Irfan. Two fours in his first over.

Watchful start! Rohit Sharma gets beaten on the first ball from Amir but he and Shikhar Dhawan manage to tackle with Amir's pace and swing.

Kolkata: Indian bowlers held their nerve and restricted ultra cautious Pakistan to 118 runs in the rain-curtailed encounter at the Eden Gardens in Kolkata on Saturday.

Tight final over from Bumrah, #IND will be chasing 119 in Kolkata

Bumrah holds his nerve! Pakistan fail to end with a flourish as young Jasprit Bumrah concedes merely seven runs in the final over.

Nehra sends Malik packing! The experience has come in handy as Ashish Nehra cramps Shoaib Malik for room. The Pakistani batsman top edges one and R Ashwin takes a neat catch at the short fine-leg.

Jadeja breaks partnership! Umar Akmal perishes as he tries to cut one past the wicketkeeper. Dhoni does a fine job as he holds on to that.

Bumrah leaks 13! Akmal and Malik are going after the Indian younsters. Last two overs have yielded 28 runs for Pakistan.

Pakistan go after Pandya! Hardik Pandya is taken to the cleaners as Malik and Akmal hit a six each. Pakistan are upping the ante.

Nehra frustrates Malik! Ashish Nehra bowls a tight over. Only two runs off it. Pakistan struggling.

Pandya removes Afridi! Pakistan skipper loses his patience and his wicket. Virat Kohli holds on to an easy catch in the deep.

Pakistan slowing it down! Shahid Afridi is doing his best to smack every ball out of the ground only problem is it is not going as per his plan.

Shehzad does the usual! Ahmad Shehzad has done what he usually does. Wastes a number of deliveries, plays a cute shot and then gets out. Bumrah strikes.

Pandya, you beauty! Suresh Raina has provided India their first breakthrough but all credit to Hardik Pandya for Sharjeel dismissal. the Indian all-rounder runs in from the deep, dives forward to take a stunner.

Jadeja troubles Shehzad! Ahmad Shehzad is slowing it down for Pakistan. A four for him in that over but he is looking clueless.

Ashwin magic is on! R Ashwin is getting massive turn and it is an understatement to describe what the Indian bowler is doing.

Sharjeel cuts! Jasprit Bumrah concedes a four on the last ball of his first over as powerplay comes to an end.

Shehzad joins the party! Ahmad Shehzad has made a move as he danced down the track against R Ashwin. But the Indian bowlers is continuing to turn it big.

Ashwin on a roll! Ravichandran Ashwin is turning it big as Shehzad and Sharjeel struggle. Spin and bounce for the offie but no damage done.

Watchful start! Ashish Nehra started the proceedings for India as Ahmad Shehzad and Sharjeel Khan made a watchful start.

The start of the game was delayed due to wet outfield and hence, it will be a 18-overs a side match. The reduction in overs also mean that it will be 5 overs of powerplay instead of 6.

This group match is a must-win for the home team if skipper MS Dhoni’s boys want to make it to the big league.

Here's how Team India warmed up ahead of the big clash against arch-rivals Pakistan.

Earlier, it had rained heavy to light in Kolkata since early morning today, keeping fans on the edge about the crucial India-Pakistan match at Eden Gardens this evening.

Almost all the covers off now and we've got something special coming up too#INDvPAK #WT20 pic.twitter.com/0iouwV1u6i 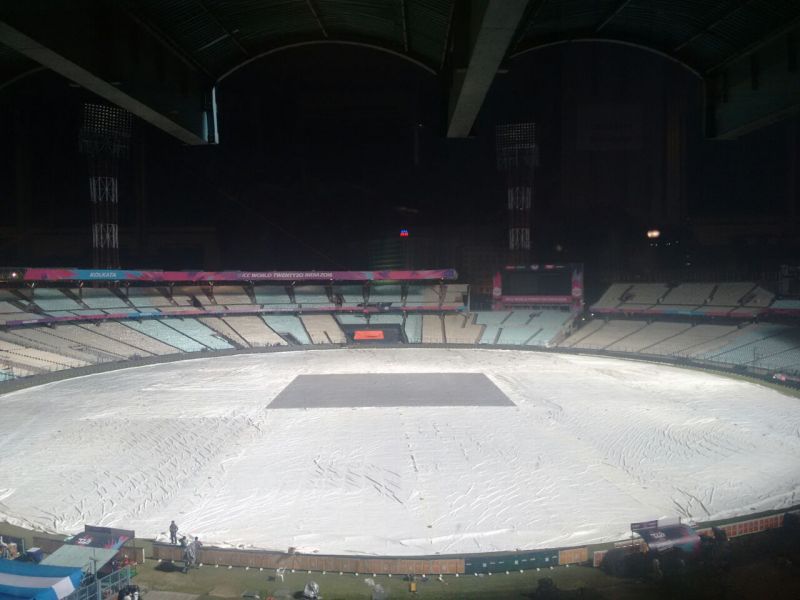 Here are live updates from all the action in Kolkata:

7.52 pm: The felicitation ceremony is over. Former cricket legends batted for peace between both countries. Toss expected soon.

Lovely stuff ahead of the game with #IND and #PAK legends being felicitated at Eden Gardens #INDvPAK #WT20 pic.twitter.com/3scUpRCo4F

7.47 pm: Former cricket legends from both countries India and Pakistan get felicitated.

It's the #WT20 on @Snapchat!
Search for 'CricketICC' and find the special #INDvPAK Story NOW!#WT20 #IND #PAK pic.twitter.com/04si69eO8R

The run machine is gearing up at Eden Gardens for #Ind v #Pak - @imVkohli #WT20 pic.twitter.com/5vArZ3AgJG

BCCI Treasurer @AnirudhChaudhry with @juniorbachchan at the Eden Gardens for #Ind v #Pak at #WT20 pic.twitter.com/gt8eCg2LNH

The Sultan of Swing - @wasimakramlive greets the Little Master -Sunil Gavaskar ahead of #Ind v #Pak at Eden Gardens pic.twitter.com/yROAe4NMoc

7.23 pm: Covers are coming off. The pitch is being rolled and creases have been marked. Super soppers are busy. 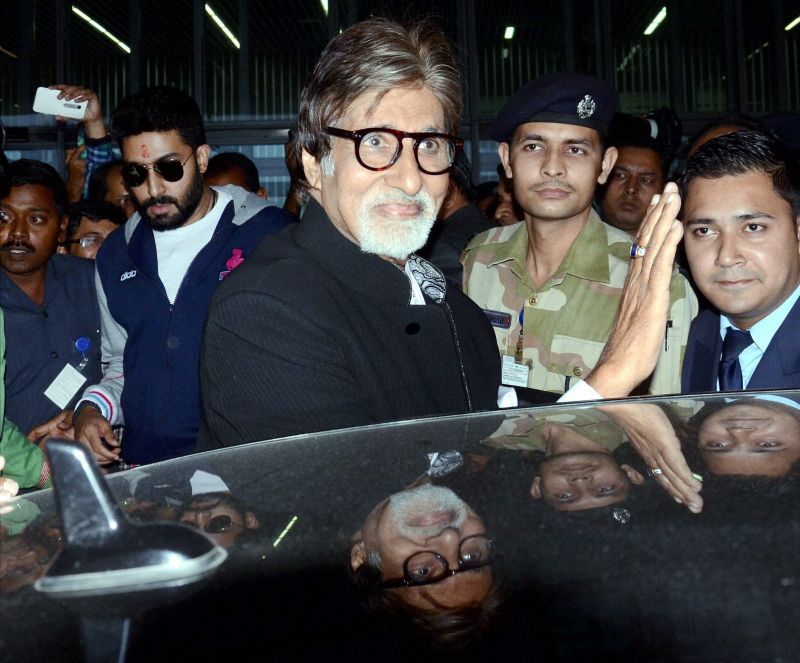 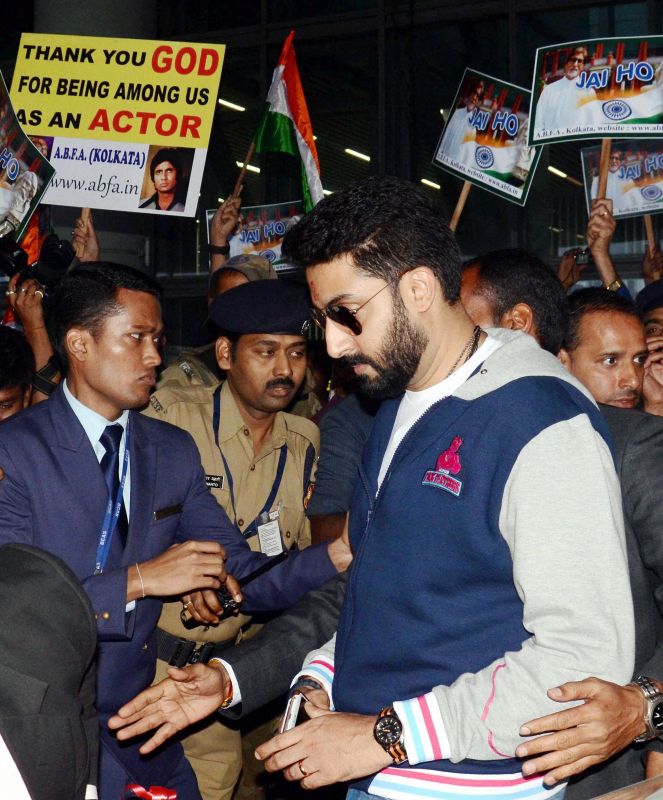 The scene right now in Eden Gardens, toss is delayed with no news regarding inspection yet #INDvPAK #WT20 https://t.co/Txg3uGYyFa

6.56: Ground has been cleared in the bowler's run-up area. Toss to be delayed, scheduled for 7 pm local time.

6.50 pm: Teams have arrived the Eden Gardens. Mopping up activity is going on.

The #IND team arriving here at Eden Gardens a short while ago
LIVE - https://t.co/XzK2mnrr8R#INDvPAK #WT20 pic.twitter.com/kn14K6AShq

6.38: Huge cheer from fans as the central cover goes off.

6.33: Rain has stopped. Ground staff are still clearing the water off the covers. It was raining seconds ago and now has stopped. Unpredictable scenes t Eden Gardens.

Eden Gardens is under covers at the moment. It is raining - #Ind v #Pak #WT20 pic.twitter.com/pLWFijri9D

6.20 pm: It has started drizzling again at Eden and getting frustrating for ground staff.

5.45 pm: The rain has stopped and super sopper is at work. 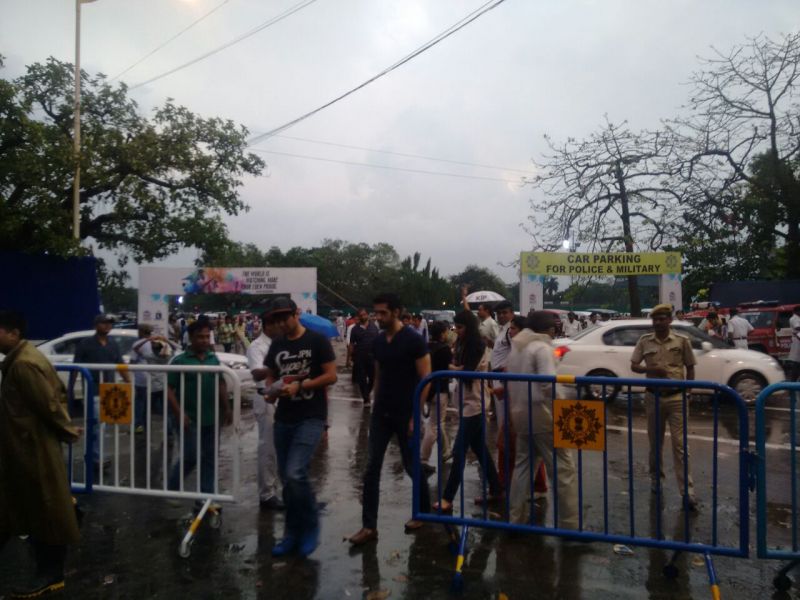 5.20 pm: Pitch inspection is at 6.30 pm after the clouds held around 5.30 following a brief spell of heavy showers.

Ranked number one in the tournament, India are under pressure after a shocking loss to New Zealand in the tournament’s Super 10 opener while Pakistan demolished Asian rivals Bangladesh by 55 runs.

Seriously heavy rain here at Eden Gardens but it looks like a break in the clouds is coming #WT20 #INDvPAK https://t.co/xJVmH0WVCf

It will clearly be a battle between Indian batsmen and Pakistani bowlers. "After the loss to New Zealand, India are under far more pressure against Pakistan. I feel Pakistan start as favourites for the game on Saturday," said veteran Sunil Gavaskar.

However, Indian bowlers too have done a commendable job in the recent past with the likes of veteran Ashish Nehra and young Jasprit Bumrah leading the attack from the front. Ravichandran Ashwin and Ravindra Jadeja have also struck at vital moments. 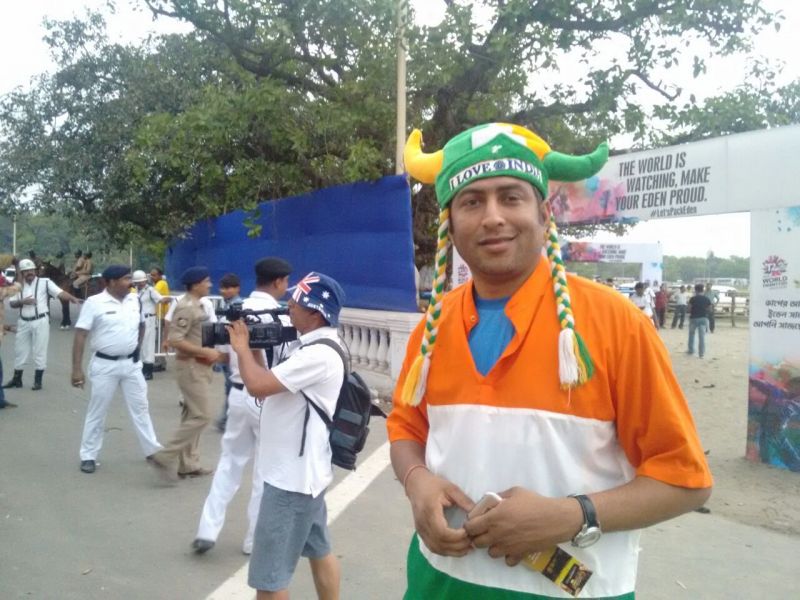 Fans were seen in high spirits outside the stadium. (Photo: Wriddhaayan Bhattacharyya/DC)

HUGE forks of lightning and claps of thunder around the ground here in Kolkata #INDvPAK #WT20 https://t.co/kXftEPXUYD

Cloudy weather near Eden Gardens in Kolkata ahead of #IndvsPak #WT20 pic.twitter.com/2d8sVyUqEd

It rained heavily for nearly two hours in the morning, keeping ground staff on tenterhooks -- ahead of a clash that generates a completely different range of emotions among fans of both countries.

Unfortunately, there was an ominous prediction of heavy showers in the evening today.

“There are chances of rain and thundershowers in the evening in certain pockets. We can’t specifically say when and where but there are chances,” said M S Jana, assistant meteorologist at the Regional Meteorological Centre in Alipore. 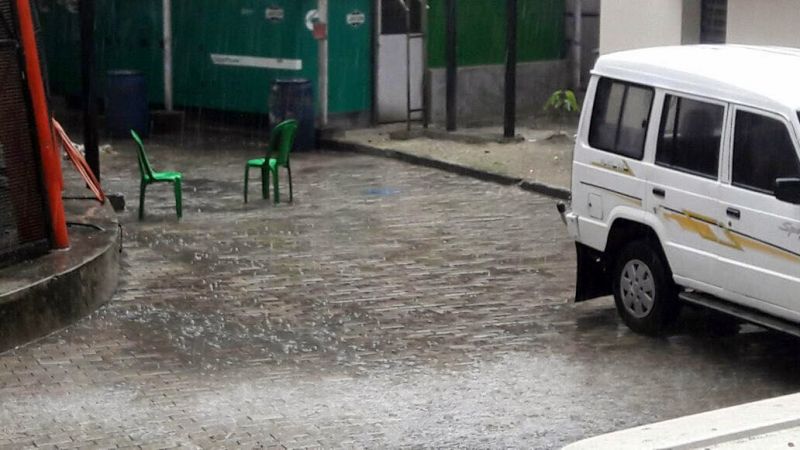 Wet conditions is not something that will delight fans. (Photo: Deccan Chronicle) 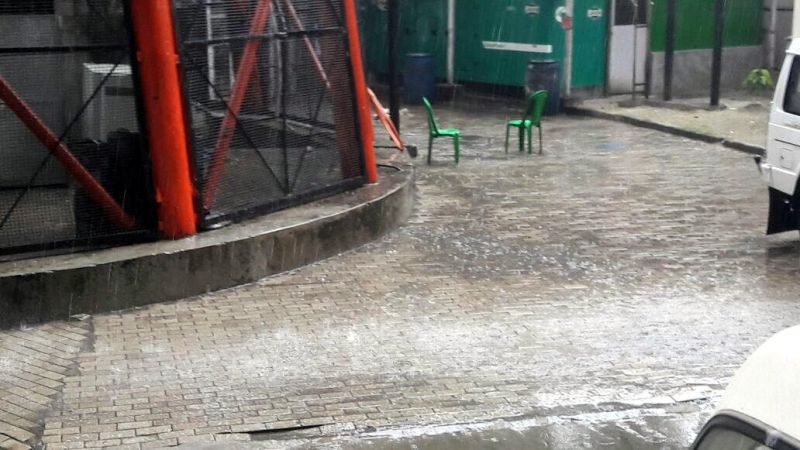 Areas around the stadium were completely wet much to the disappointment of fans. (Photo: Deccan Chronicle)

Heavy rains in the morning even blocked roads in Kolkata. But the skies cleared by early afternoon and there was bright sunshine. The match starts at 7.30 pm and fans would be hoping that rain gods don’t play spoilsport during this marquee clash.

This is the Norwester or the Kalbaishakhi season in Bengal and Bangladesh -- local thunderstorms and strong squalls that frequently lash the region from end March till the monsoon. 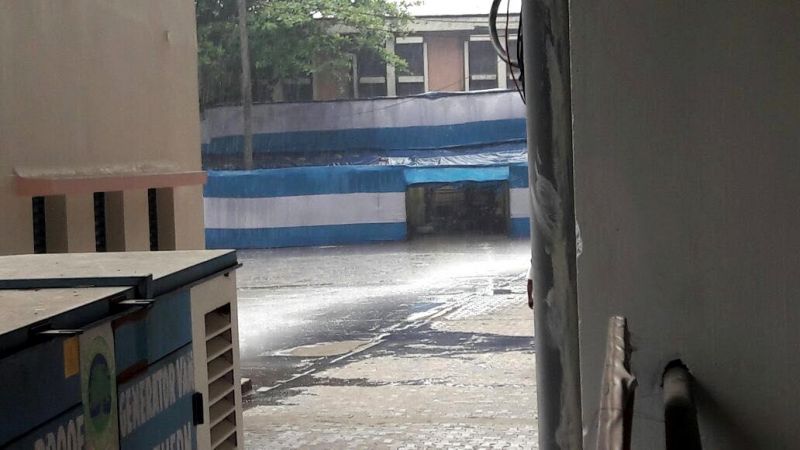 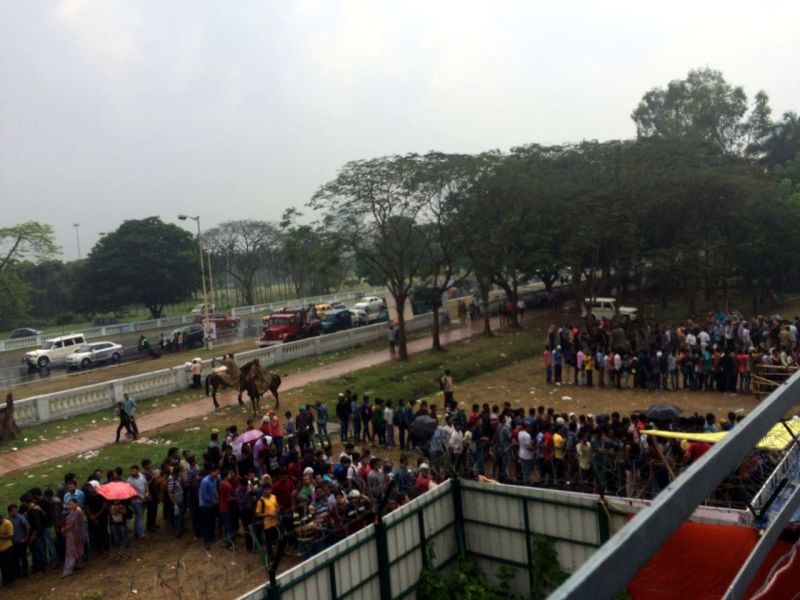 Fans were lined up outside Eden Gardens on Saturday braving the rain in a bid to get a ticket. (Photo: Deccan Chronicle) 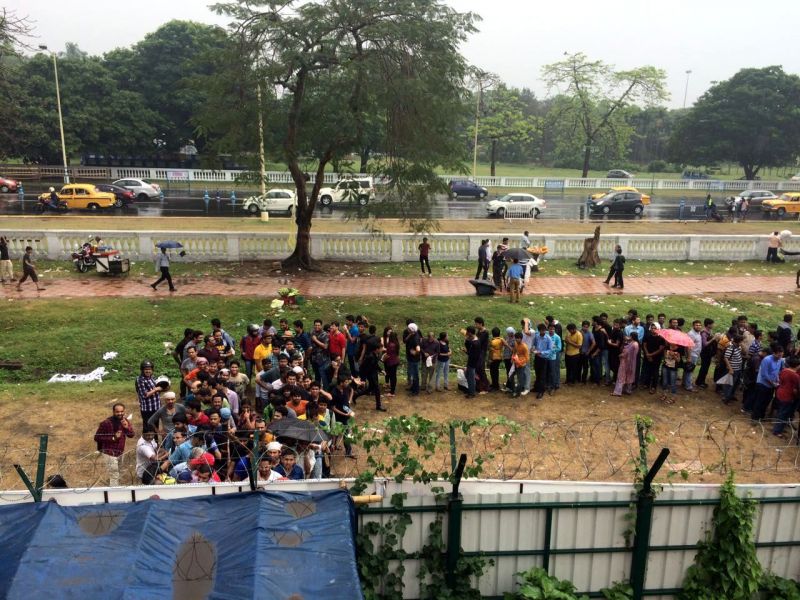 The drainage at Eden Gardens is also a perennial problem because of which several international and Indian Premier League (IPL) matches have been washed out in the past.

For this match, a golf-course pitchmaker has worked on the Eden drainage and outfield. A new super sopper machine also arrived last Sunday, taking the total super sopper count to five. 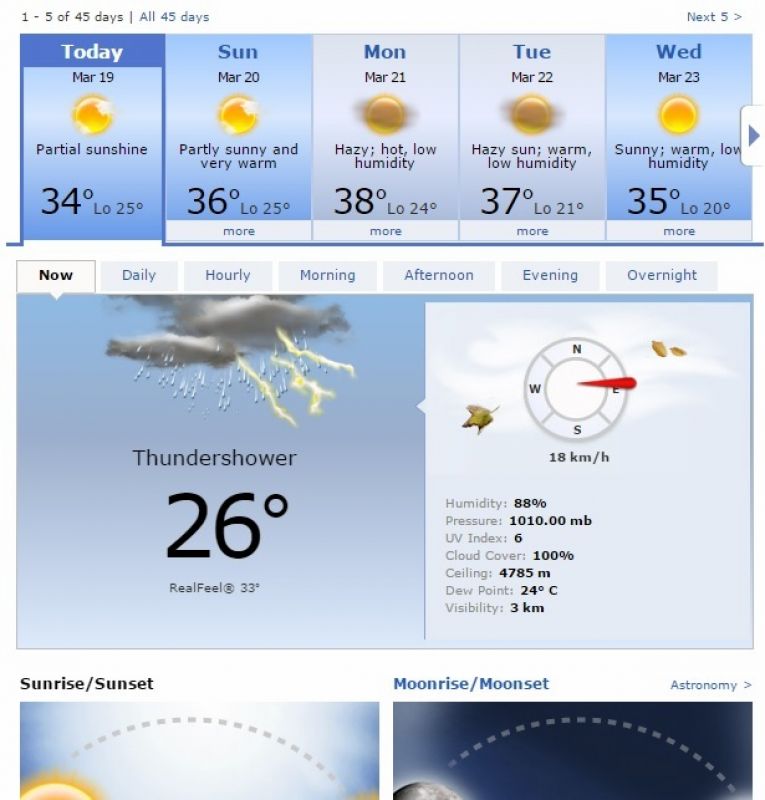 India enter as favourites after having defeated Pakistan last time the two sides met in the Asia Cup. M S Dhoni and Co will be desperate for a win after the shocking loss to New Zealand at Nagpur in the Super 10 opener.

The numbers, however, favour Pakistan when it comes to Eden, who have beaten their arch rivals four times in ODIs. They have won and lost a game each in Tests.

ICC World Twenty20: Five players to watch out for