The wedding receptions of Virat Kohli and Anushka Sharma are expected to be attended by who’s who from the world of Bollywood and cricket fraternity amongst others.(Photo: DC File/Twitter)

Mumbai: Team India skipper Virat Kohli and Bollywood actress Anushka Sharma, who are fondly called as ‘Virushka’, are currently the talk of the town. The two have been one of the discussed topics in relation with Indian celebrities post their most-talked marriage in Tuscany, Italy on December 11.

The marriage was attended only by some close friends and family members from both the families.

After the duo officially announced their marriage on social media, the wishes are pouring in for the couple from fans, celebrities from Bollywood and cricket fraternity. The couple is currently on honeymoon in Finland and will be back to India soon.

Today we have promised each other to be bound in love for ever. We are truly blessed to share the news with you.This beautiful day will be made more special with the love and support of our family of fans & well wishers. Thank you for being such an important part of our journey. pic.twitter.com/aobTUwMNAK

Today we have promised each other to be bound in love forever. We are truly blessed to share the news with you. This beautiful day will be made more special with the love and support of our family of fans & well wishers. Thank you for being such an important part of our journey. pic.twitter.com/Scobdiqk7l

Even before the couple comes back to India, social media is currently buzzing with the candid photos of the two. The photos and videos of their marriage and post-wedding parties have left the fans gushing as well.

If you think the wedding festivities are over, then think again. After tying the knot in Italy, the couple is all set to gear up for grand celebrations in Delhi and Mumbai. And here are all the details about the same

What are the dates:

The newlyweds will host two receptions, one in New Delhi and the other in Mumbai. While the wedding reception in the national capital will take place on December 21, Thursday, the Mumbai reception will take place on December 26, Tuesday, two days after India’s final match of this calendar year, a Twenty20 against Sri Lanka at the Wankhede Stadium and a day after the Christmas.

The venues of the wedding receptions:

The wedding receptions, which are expected to be attended by who’s who from the world of Bollywood and cricket fraternity amongst others.

And here are the beautiful wedding reception cards:

The pictures of the reception cards for both the cities is currently doing rounds on social media and fans are just not able to get over it. Both the cards have a nature theme to it 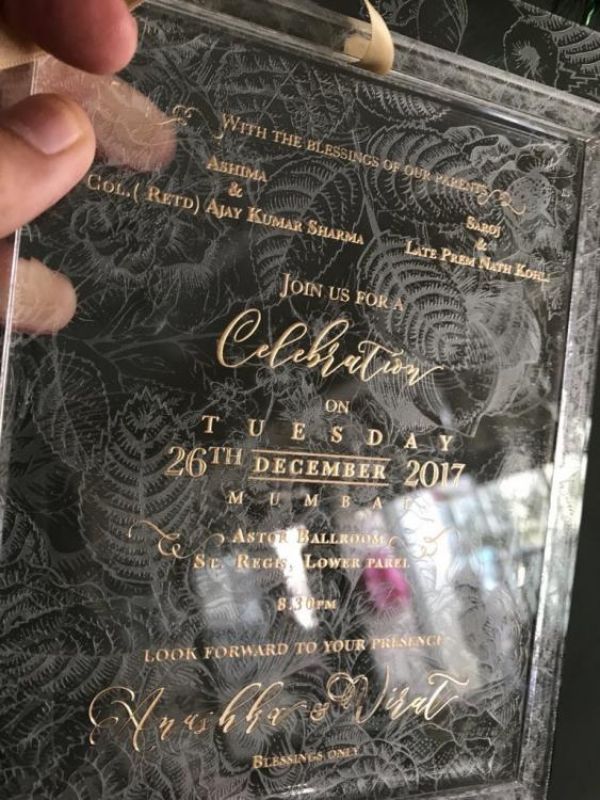 @imVkohli @AnushkaSharma what a lovely invite. Everything about your wedding has been personal,classy & romantic. Just like you both. God bless. pic.twitter.com/OBHVp2dnE1 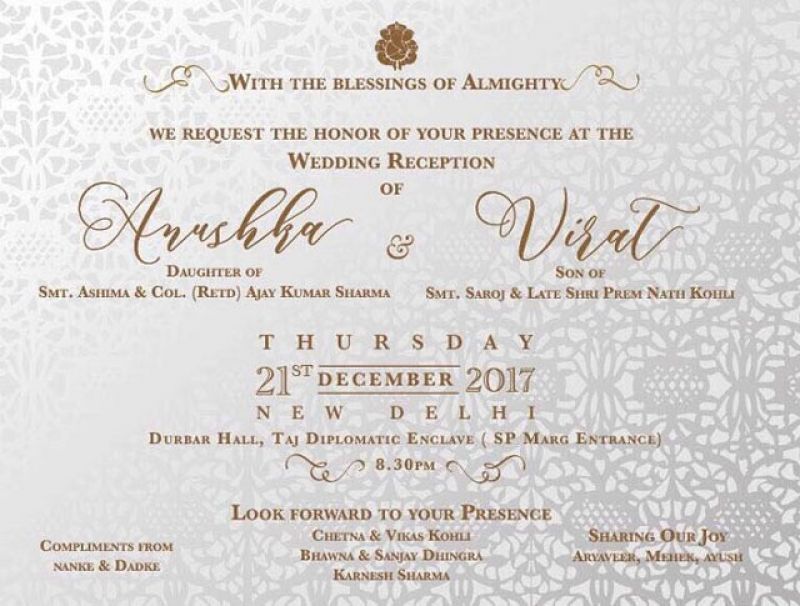 What next after the receptions?

Following the Mumbai reception, Kohli will leave for South Africa tour where India are going to play three Tests, six ODIs and three Twenty20s. Anushka will join Virat in South Africa for some time before returning to Mumbai to follow her professional commitments.