Suresh Raina will not feature in the second India-New Zealand ODI as he needs more time to recover. (Photo: PTI)

New Delhi: Suresh Raina will miss the second ODI against New Zealand in New Delhi on Thursday after missing the first game in Dharamsala on last Sunday.

The left-hander needs more time to recover from the bout of viral fever, said BCCI.

The Indian cricket board in its media release said: “The BCCI Medical team has confirmed that Suresh Raina, who is recovering from a bout of viral fever and had missed the Dharamsala ODI, is ruled out of the second ODI of the Paytm ODI Trophy against New Zealand.”

“The team management has allowed Suresh Raina more time to recover. There will be no replacement in the team,” added the Indian cricket board.

Raina batted for about 45 minutes at the nets on Tuesday but the Indian team management confirmed that he was still not 100 per cent match fit to play in the second game of the five-ODI series. 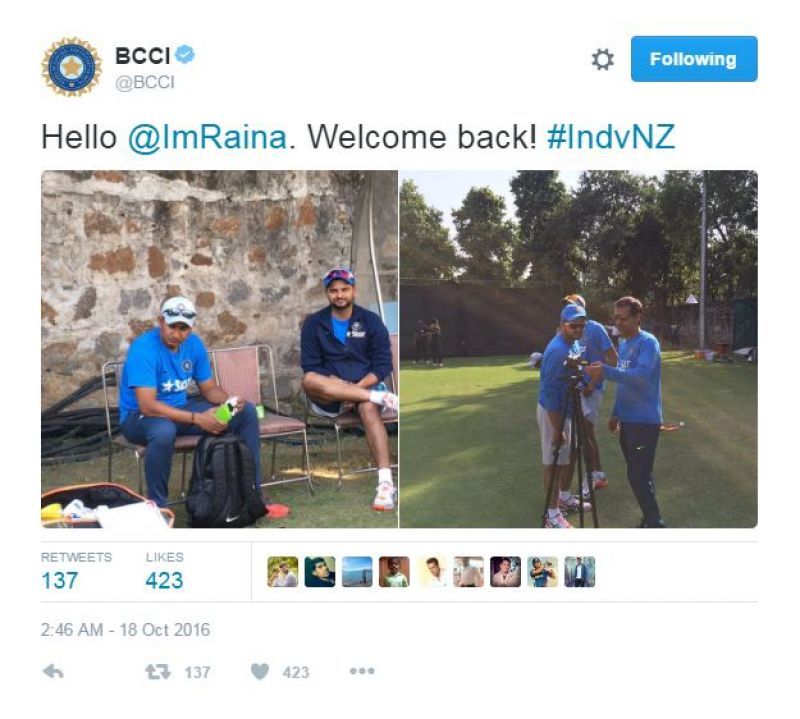 29-year-old has been looking forward to featuring in his first ODI since October 2015. The southpaw was dropped for the ODIs in Australia and the limited-overs tour of Zimbabwe earlier this year besides the two-match T20 series against the West Indies in USA.

He has not had time in the middle since the Duleep Trophy where his scores read 52, 35 and 90.

Had Raina been fit, it would have been a selection conundrum between him and Keder Jadhav, his like for like replacement in the first game.

Jadhav had picked up two wickets with his handy part-time off breaks in the first ODI.

At the nets, Jadhav was seen bowling off breaks to both Raina and Dhoni for an extended period of time alongside other off-spinner Jayant Yadav.

In fact Jadhav bowled him for a period of time at the nets. He was also given throwdowns by team's expert Raghavendra, batting coach Sanjay Bangar and chief coach Anil Kumble.

Dhoni batted the longest time at the nets. He faced Dhawal Kulkarni for a considerable period and also practised the pull shot against throwdowns. He then spent another 25 minutes batting against spin especially Jayant.

During one such delivery, Jayant was seen asking his skipper: "So point stays up" which indicated that the skipper wanted him to not give him width outside off-stump.

Jayant altered the length and bowled a conventional off break slightly short of length.

Dhoni came down the track but was too close to the delivery before checking his shot. There were other match simulations also during the session.

It was an optional session at the Feroz Shah Kotla ground as skipper Dhoni along with Raina batted for a considerable length of time.

Others who attended the session were Axar Patel, Mandeep Singh, Kedar, Kulkarni, Jayant.