Drama unfolded when Mustafizur Rahman missed two bouncers from Isuru Udana in the final over and was run out but the Bangladesh players contested the call, saying it was a no ball due to its height. (Photo: AFP)

Colombo: Mahmudullah Riyad smashed an unbeaten 43 to help Bangladesh edge out Sri Lanka by two wickets in a bad-tempered Twenty20 and enter the final of the tri-series in Colombo on Friday.

Chasing 160 for victory in a virtual semi-final, Mahmudullah steered the team home with a six on the penultimate ball but not before a heated exchange of words between the players of the two sides.

The Tigers will take on India in the final on Sunday.

Drama unfolded when Mustafizur Rahman missed two bouncers from Isuru Udana in the final over and was run out but the Bangladesh players contested the call, saying it was a no ball due to its height.

Skipper Shakib Al Hasan looked furious on the boundary and even waved to call the batsmen back to the pavilion. But sanity prevailed at R Premadasa Stadium and Bangladesh erupted after getting the winning runs.

"You can't expect more than that in a T20 game, so much excitement, emotion," said Shakib after the win.

"We always had healthy competition in the ground, but outside, we are friends. Emotions take over, I need to be careful as a leader of a team, I will be careful next time," the star all-rounder added.

Mahmudullah, who was stand-in-captain till Shakib joined the side on Thursday after recovering from a finger injury, hit 3 fours and 2 sixes during his 18-ball blitz to be named the man of the match.

"One of my best innings. When Shakib came into the team, that was a big boost. Players were eager to do well today," Mahmudullah said.

"When Shakib got out, I was under pressure. The confusion was because it was the first bumper, but we should forget it, (it) happens in the game."

But it was a crucial third-wicket partnership between opener Tamim Iqbal, who made 50 off 42 balls, and Mushfiqur Rahim, who hit 28, that set up the win for the underdogs.

Earlier Kusal Perera and Thisara Perera struck gritty half-centuries to lift the hosts to 159-7 after being put into bat first.

The left-handed pair of Kusal (61) and Thisara (58) counter-attacked after Sri Lanka were reduced to 41-5.

"Very tough game, we are disappointed. We thought we were 10-15 runs short, 160 is still reasonable," said a disappointed Thisara, who was standing in as captain for suspended Dinesh Chandimal.

Bangladesh players were also accused of unruly celebrations by the ground staff at the stadium after a glass shutter was found broken in their dressing room. The team did not respond to the allegations. 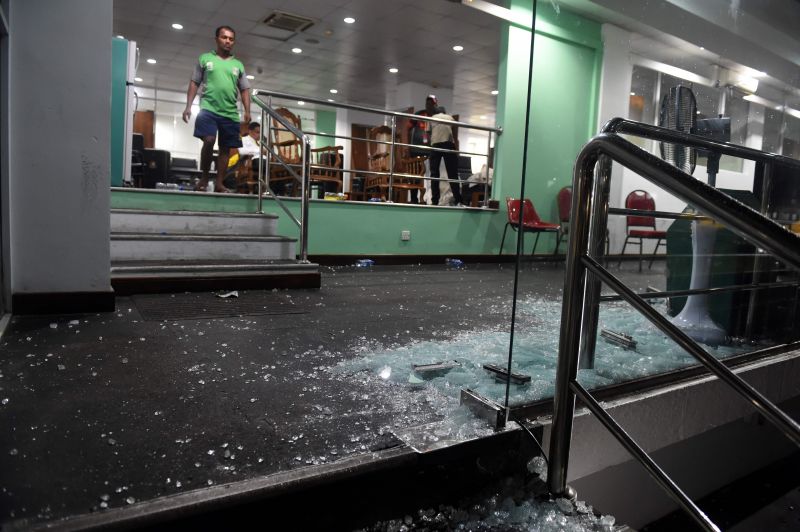 The final of the tournament, which commemorates 70 years of Sri Lankan independence, is slated for Sunday.