KL Rahul brought up his 4th half-century in the series to help India make a promising start after Australia scored 451 in the first innings. (Photo: BCCI)

Stumps! Good day of Test cricket for India as it closed second day's play at 120/1, they still trail Australia by 331 runs. Indian openers, KL Rahul (67) and Murali Vijay (42*) put up a solid 91-run stand to lead India's charge against the visiting team.

100 runs were scored in the 32 overs of the final session at the loss of one wicket. Pacer Pat Cummins, who has been brought into the Australian team to replace injured Mitchell Starc, dismissed Rahul for 67.

Australia, who started the day at 299/4, took their total to 451. Four of the six Aussie wickets to fall on Day 2 were claimed by Ravindra Jadeja. Aussie skipper Steve Smith was irremovable as he remained unbeaten on 178. All-rounder Glen Maxwell, who notched a fifty on Day 1, clinched his maiden Test ton on Friday.

Last over of the day.

Lyon appeals against Vijay for a catch at short, it is turned down by umpire Ian Gould. Australia went for referral but replays showed that there was no contact between bat and ball.

Josh Hazelwood with a maiden over. The run-rate has slowed down a little since Rahul's departure. India still trail by 342 runs.

Wicket! Pat Cummins strikes for Australia and they finally have a wicket after Indian openers made a good start. KL Rahul out, caught by Matthew Wade. The short ball has done the trick. Rahul tried to get the bat away, but failed to evade the ball and gloved the ball to the wicket-keeper. Cheteshwar Pujara has come out to bat.

Fifty for KL Rahul, his 4th in this series. He and Murali Vijay are doing a fine job for India after Australia had amassed 451 batting first. KL Rahul has played his shots and has made Australia did not get a chance to set him up for a wicket. Good, aggressive start but he must squander a chance and go on to score a big hundred.

Tea time! KL Rahul and Murali Vijay were tested by Pat Cummins and Josh Hazlewood  but the Indian duo has done well to play out the tricky period of eight over before tea.

India openers have made a cautious start. Josh Hazelwood and Pat Cummins are operating for Australia.

Indian openers Murali Vijay and KL Rahul are out at the crease.

And that's it! Australia are bowled out for 451. Jadeja has run out Josh Hazelwood in a MS Dhoni-esque style.

A good turnaround by Indian bowlers. They have picked six wickets today at an expense of 152 runs. Ravindra Jadeja picked up five wickets to stop Australia from getting out of sight. The pitch has started to play some tricks and Australia would be happy with their.

Gone! Another wicket for Jadeja, the left-arm spinner has now picked five wickets in this innings. Karun Nair takes the catch at silly point to dismiss Lyon. It's Jadeja's 4th five-wicket haul of his career.

Wicket! Steve O'Keefe out, caught by Murali Vijay. First wicket of the session and it has fell to a short ball. O'Keefe tried to pull the pacer but could only manage to pust it till the fine leg, where Vijay took the catch. Nathan Lyon has come out to bat.

Steve O'Keefe along with Steve Smith are slowly building Australia's innings. Umesh Yadav and R Ashwin are operating for India.

Lunch! 102 runs were scored in the first session, while India picked up three wickets. All three of them fell to Ravindra Jadeja. Steve Smith and Glenn Maxwell continued from where they left yesterday, they batted maturely to build Australia's total. Maxwell brought up his maiden Test hundred before getting out to Jadeja. Smith and Matthew Wade added quicks runs to push Australia's total past 400.

Jadeja struck again with two wickets in a single over, dismissing Wade and Pat Cummins, a little before innings break. India will be hoping to bowl out Australia soon when they come out to play in the second session of Day 2.

Aussie skipper Smith has brought up his 150. While three wickets have fell for the visiting team this morning, Smith has looked comfortable and continued to build Australia's total.

Wicket! Two wickets in fact. Jadeja is on fire. First he got Wade out, caught by Saha. And then he bowled out Pat Cummins.

The Australia batsmen have stepped up the run-rate. The duo of Smith and Wade have added 39 off 46 deliveries.

Hundred! Maiden Test hundred for Glenn Maxwell and it has been a brilliant innings. The batsman is exhilarated, screams and hugs captain Steve Smith. Maxi has justified his selection with the ton and has shown to the world that he can bat in the longer format.

We are underway here in Ranchi for Day 2 action. Steve Smith (123) and Glenn Maxwell (92) are batting for Australia. Stand-in captain Ajinkya Rahane has opted for pacers Umesh Yadav and Ishant Sharma to open the bowling on the second day.

First ball of the day and Glenn Maxwell's bat has been broken. The batsman is smiling. 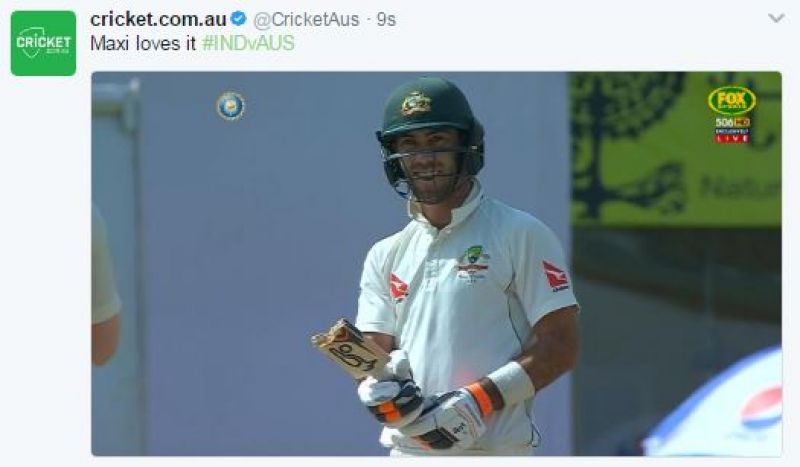 Captain Virat Kohli could be seen with the Indian coaching staff but he's not training. No official confirmation on whether we will see him in action on Friday or not. 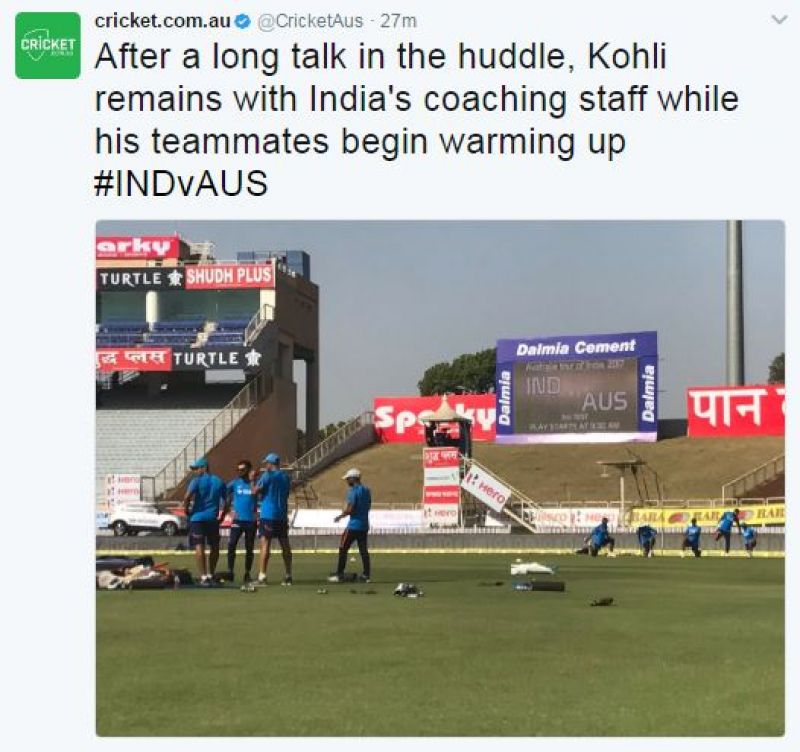 Ranchi: India will look to regroup and fight their way back into the third Test against Australia in Ranchi on Friday after Australia ended Day 1 of the Test at 299 for 4.

Aussie skipper Steve Smith struck another ton against India, his second of the series, to lead Australia's charge and is unbeaten on 117. The captain was well assisted by all-rounder Glenn Maxwell, who notched up his first Test fifty.

There are still concerns over Indian skipper Virat Kolhi's shoulder injury. Kohli walked off the field during the first hour of the second session on Day 1 after injuring his shoulder while trying to abort a boundary.

BCCI issued a statement late last evening stating that there are no serious concerns with regards to the injury which will hamper his recovery and that Kohli is receiving treatment to recover from a strain in his right shoulder.