London: Australia captain Aaron Finch and pace bowler Mitchell Starc stole the show as the holders eased to an 87-run win over Sri Lanka at the Oval on Saturday.

Finch equalled his career-best one-day international score with a masterful 153 and Steve Smith chipped in with 73 as Australia scored 334/7.

Needing a World Cup record run-chase to claim a shock win, Sri Lanka got off to a flying start thanks to a first-wicket partnership of 115 between captain Dimuth Karunaratne and Kusal Perera.

But Perera departed for 52 and when Karunaratne fell on 97 the game swung back in Australia’s direction.

Starc was the catalyst with a fiery spell of three wickets in six balls, Australia eventually dismissing Sri Lanka for 247 thanks in large part to his 4-55 from 10 overs.

Kane Williamson added three wickets of his own as Australia made it four wins from their five group matches after previously beating Afghanistan, the West Indies and Pakistan.

Their lone defeat in the 10-team tournament came against India and their latest victory puts them well on course for a semi-final berth.

Sri Lanka, who lost their last seven wickets for 42 runs, have only one win from their five matches, a disappointing run that includes two washouts.

They face a struggle to reach the semi-finals with only four matches left, a spell that features encounters with title contenders England and India.

Sri Lanka had briefly looked capable of surpassing the World Cup chase set by Ireland, who made 329-7 to beat England in 2011.

Karunaratne and his opening partner Perera blasted 24 from the first two overs and reached their fifty partnership in just the seventh over.

But Starc bowled Perera and Jason Behrendorff dismissed Lahiru Thirimanne for 16 as Australia hit back. 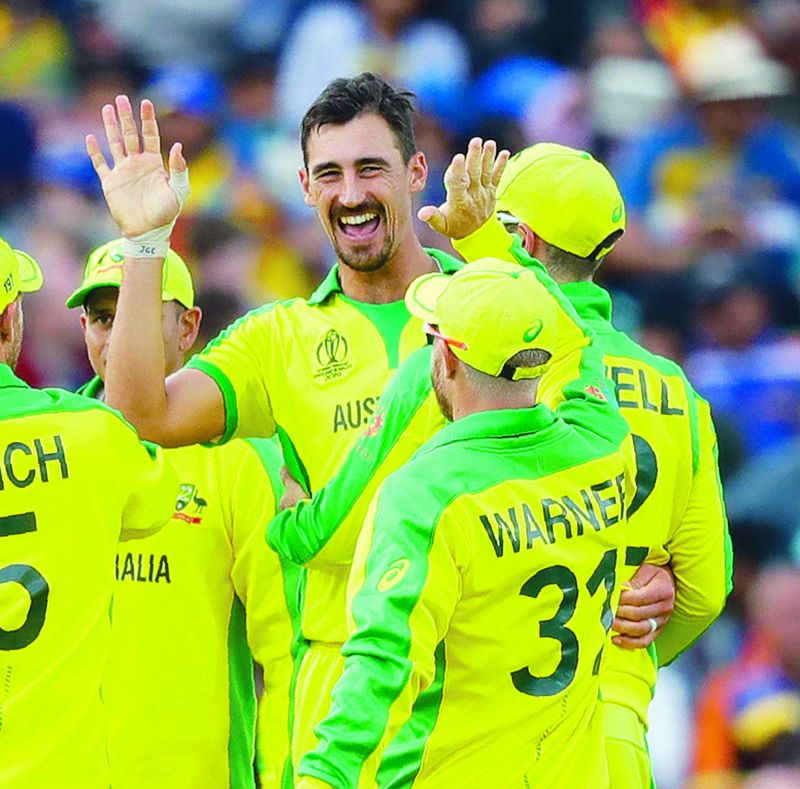 A six from Kusal Mendis in the 31st over signalled Sri Lanka’s intent to get cracking.

But crucially Karunaratne stumbled short of his maiden World Cup century when he carelessly flicked Richardson to Glenn Maxwell at backward point.

That left Sri Lanka 186-3 and set the stage for Starc to turn the screw by dismissing Milinda Siriwardana, Thisara Perera and Mendis in quick succession.

Mendis’s mistimed drive off Starc reduced Sri Lanka to 222-7 and shattered their resistance.

He was well-supported by Smith’s 73 from 59 balls and the pair put on 173 runs for the third wicket.

Together with opening partner David Warner, Finch took the attack to the Sri Lankans after being put in to bat under cloudy skies in south London.

The pair passed fifty for the opening wicket for the fourth time in five games at the World Cup.

Sri Lanka had no answer to Finch’s brutal assault and by the time he departed, caught by Karunaratne off Isuru Udana, he had put Australia in a commanding position.