David Warner led Sunrisers Hyderabad (SRH) to IPL victory in 2016, and the Men in Orange will open their campaign against Rajasthan Royals at home on April 9. (Photo: BCCI)

Mumbai: The much-awaited schedule of the eleventh season of Indian Premier League (IPL) was confirmed on Wednesday, with Mumbai Indians hosting Chennai Super Kings at Wankhede Stadium here on April 7. The final, too, will be played at the same venue on May 27.

David Warner led Sunrisers Hyderabad (SRH) to IPL victory in 2016, and the Men in Orange will open their campaign against Rajasthan Royals at home on April 9.

Having retained the core of David Warner, Shikhar Dhawan and Bhuvneshwar Kumar, the Hyderabad team will hope to enjoy a repeat of the 2016 season.

11 of their 14 matches in the league stage start at 8 p.m, whereas three of the other matches will kick off at 4 p.m.

While Afghanistan’s Rashid Khan will look to continue his exploits in the upcoming season, Bangladesh’s Shakib Al Hasan will be another key for the Sunrisers’ success this season.

Ahead of the upcoming season, here is Sunrisers’ entire schedule this season. 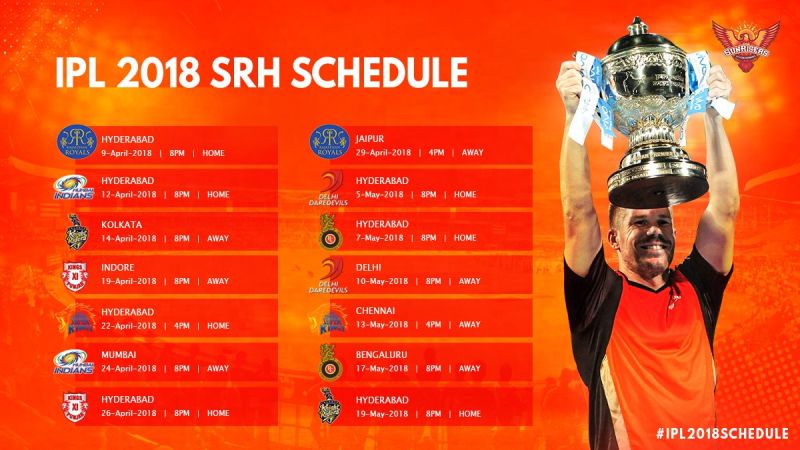 There will be a lot of players to keep an eye on, including big-hitters like Carlos Brathwaite and Yusuf Pathan. Here is the entire squad of SRH for the eleventh edition of IPL.

Live telecast: The matches can be seen live on the Star Sports network.

Live streaming: It can also be streamed live on Hotstar, the digital platform on the internet.