DECCAN CHRONICLE. | SOUMO GHOSH
Published Aug 14, 2017, 5:49 pm IST
Updated Aug 14, 2017, 8:44 pm IST
Sri Lanka have been dismal throughout the series, failing to put up any serious challenge against Virat Kohli and co in all the three Test.

The Indians deserve a lot of credit for keeping up the intensity throughout the series. Here are a few takeaways from India’s 3-0 win over Sri Lanka. (Photo: AP)

Pallekele: Team India have continued their outstanding form in the longest format of cricket, completing their first ever series clean sweep away from home, with a 3-0 win in Sri Lanka, on Monday.

The hosts have been dismal throughout the series, failing to put up any serious challenge against Virat Kohli and co in all the three Test.

Despite the lacklustre performance by Sri Lanka, the Indians deserve a lot of credit for keeping up the intensity throughout the series. Here are a few takeaways from India’s 3-0 win over Sri Lanka.

Team India top order firing on all cylinders…or rather cannons 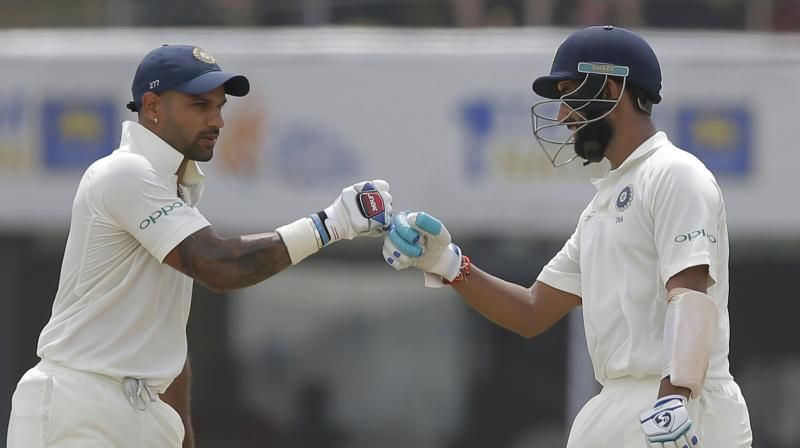 Man of the Series Shikhar Dhawan gave India the huge advantage at the top of the batting order. (Photo: AP)

The Indian top order has been instrumental in their domination of Sri Lanka in this series, with the likes of Shikhar Dhawan, KL Rahul, and Cheteshwar Pujara giving them great starts in all the three matches.

Dhawan, who was brought in as a replacement for the injured opener Murali Vijay, made a statement of intent with his performance, amassing the highest number of runs in the series – 358. Rahul, who had missed the first Test due to flu, left his ailments behind him in the second and the third, scoring 142 runs, averaging 71 runs.

One man, who deserves huge credit, however is Cheteshwar Pujara. The Saurashtra batsman has been the most consistent player for Team India in Test cricket, and he continued his good for performance, scoring 309 runs.

Interestingly, the sheer variety that the top three Indian batters offer, is something that has helped Virat Kohli and co assert their dominance. Dhawan’s consistent blitzkriegs at the top of the batting order have ensured that India were always on or around the 300-run mark by the end of Day 1 of each Test. The southpaw’s strike rate of 104.67 is something that any batsman would be proud of, even in 50-over-cricket.

It is not just the ability to score the quick runs that has helped India, however. The presence of Pujara imparts diversity to the Indian top order. The Team India no. 3 may have scored 49 runs short of Dhawan in the series, but more importantly, he played the sheet anchor role, while the likes of Dhawan, Rahul, Kohli or Rahane went after the Lankan bowlers. In fact, Pujara has faced a total of 565 balls in the series – that amounts to an astounding 94.1 overs.

When the lower order came to the party 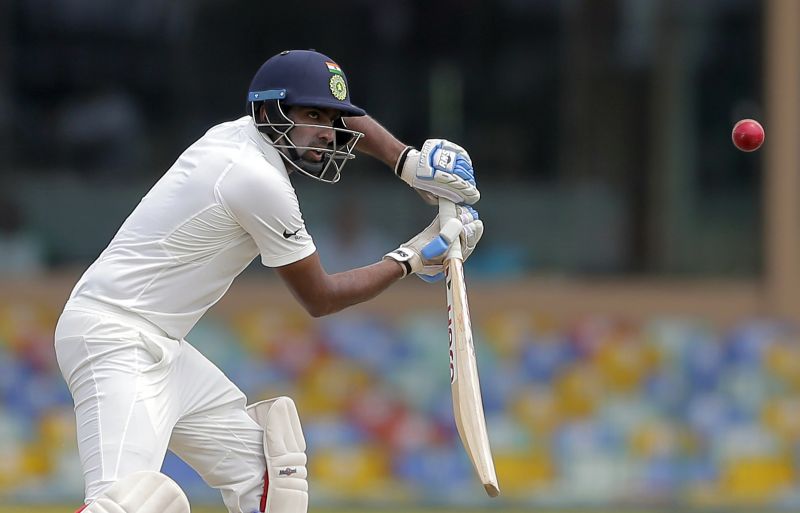 While India arguably have two of the best middle order batsmen in the world, Virat Kohli and Ajinkya Rahane, it is the lower order that did a lot of the damage against the Sri Lankans in this series.

The likes of Wriddhiman Saha, Ravichandran Ashwin, Ravindra Jadeja, Hardik Pandya and Kuldeep Yadav kept the Indian tail wagging for a long time – 783 balls in the series, to be precise. That amounts to a little over 32 overs per innings, after the tired Sri Lankan bowling attack got through an unrelenting top order consisting on Rahul, Mukund, Dhawan, Pujara, Kohli and Rahane. 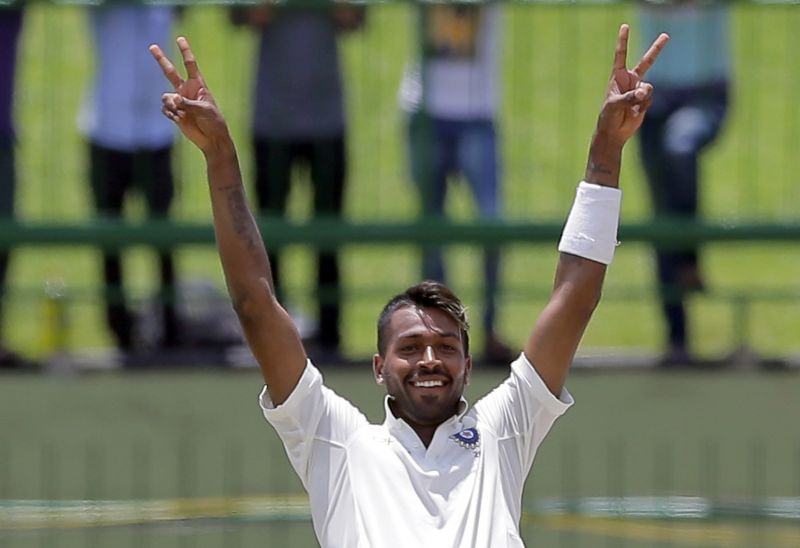 Hardik Pandya has the potential to become the lynchpin of the Indian cricket team. (Photo: AP)

The presence of a strong all-rounder like Hardik Pandya has added a whole new dimension to India’s Test team. Before, the responsibility of the lower order was shouldered by Saha, Ashwin and Jadeja. However, these three already have a bulk of responsibility to cater to, in other departments – wicketkeeping in the case of Saha, and spin bowling in the case of Ashwin and Jadeja.

With the introduction of Pandya, India now have the added advantage of having a player who can do whatever the team requires of him. Not only can he score the runs in the lower order, but he can also be Kohli’s third option as a pace bowler.

The spinners did the most of the damage in the three matches against Sri Lanka, picking up 58.33 per cent of the Sri Lankan wickets. Hence, the India captain did not need as many overs from the pacemen. While primary pacers Mohammed Shami and Umesh Yadav bowled 60.5 and 57.1 overs respectively, Pandya bowled a total of 32 overs across the six Sri Lanka innings. Kuldeep Yadav bowled almost as much (30 overs) in just one match (third Test).

Instead, Pandya, who came in to bat at a lowly no. 8 throughout the series, notched up a half century in his first ever Test innings in Galle, and followed that up with his maiden century in the third Test. The 23-year-old has shown that he can be a real asset with his all-round abilities, especially in seaming overseas conditions like England, Australia or South Africa. 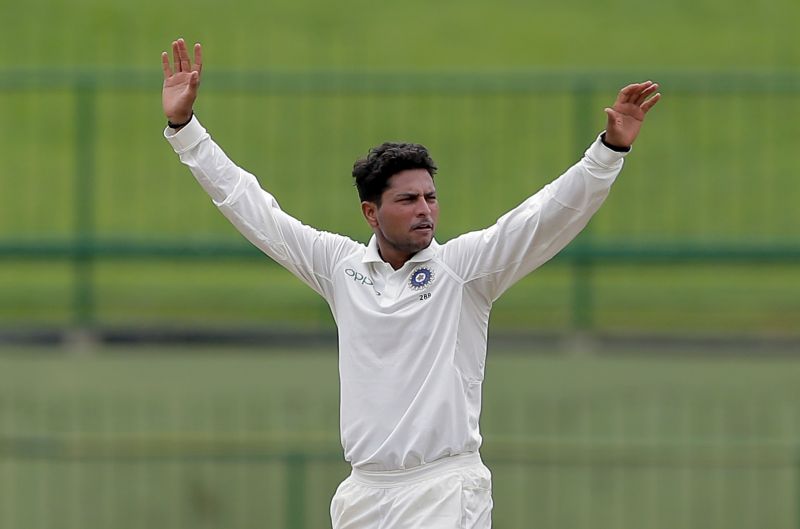 Kuldeep Yadav has shown that his 4-for against Australia in Dharamsala was not just a flash in the pan. (Photo: AP)

Kuldeep Yadav’s debut four-for against Australia in the Dharamsala Test was not a flash in the pan by any stretch of imagination. The 22-year-old has shown that he has the calibre to be a strike bowler, at least in spin-friendly condition, as he picked up his best Test figure of 4-40 in the first Sri Lankan innings.

Being a left arm wrist-spinner, a style often termed as ‘chinaman’, Kuldeep has an added x-factor in his game. There are not that many chinaman bowlers in the world these days, and that may make it a tad bit more difficult for batters to face him. However, it would be too early to jump to too many conclusions about Kuldeep as of yet, as India have only used him either as a third spinner, or as a replacement for Jadeja, against Australia and Sri Lanka, respectively. 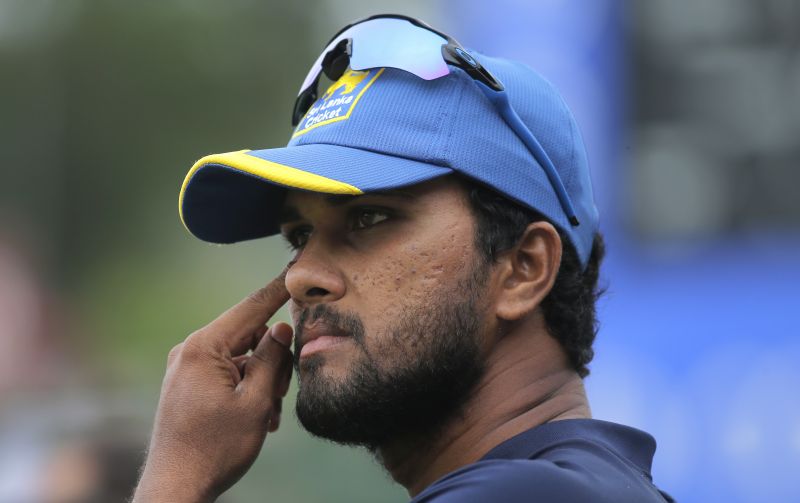 Sri Lanka have been a failure in all departments against India. (Photo: AP)

The Sri Lankan team that defeated the mighty Australians 3-0 in a three-match Test series were completely dismantled by their neighbours, exactly a year later.

Both their batting and bowling departments have been left in shambles in the series. While India put up two 600-plus scores in the series, the Sri Lankans struggled badly to put up even 300 runs on the board, a feat they managed only once in the entire series – second innings of the Colombo Test.

It was not just the batting that let the Lankans down. Their bowlers also experienced a major failure in the series. A team needs a bowling line-up that can pick up 20 wickets, to win a match. The Lankan bowling attack, that once boasted of greats like Muttiah Muralitharan, Chaminda Vaas, Lasith Malinga, and many more, only picked up 32 wickets out of a possible 60.

To sum it up for the hosts, both the batting (which can salvage a draw), nor the bowling (which wins you matches) departments were damp squibs in this series. It’s back to the drawing board for them.