England captain Eoin Morgan leaves after batting in the nets during a training session on Saturday, eve of the World Cup final. (Photo: AP)

LONDON: The eyes of the sporting world will be fixed on England. Speed merchant Lewis Hamilton will be gunning for his record sixth British Grand Prix in the middle of the countryside, while Novak Djokovic will be out to deny the SW19 darling, Roger Federer, his 21st Grand Slam with the Royal family in attendance at the posh London suburb. In the heart of the capital, the hallowed turf of Lord’s will witness either England or New Zealand making history as first-time winners of the cricket World Cup amidst fears over the possibility of the hosts’ stupendous feat getting little attention. Formula One and Wimbledon aside, women’s netball World Cup being played at Liverpool is proving to be a tough competition for cricket when it comes to media coverage.

For England, who came agonisingly close to winning the crown on three occasions — 1979, 1987 and 1992, it could be the day they have been waiting for. For a country where the gentlemen’s game originated and largely remains an elitist sport, England’s barren run in the blue-ribbon tournament has been an agonising story. With an exciting bunch of players in the current line-up, it’s their best chance to pose with the coveted trophy in the Lord’s balcony.

England skipper Eoin Morgan knows the enormity of the occasion and the kind of impact it would have on the sport in the country. “I haven’t allowed myself to think about lifting the trophy. Cricket, sport in particular, is very fickle. If you ever get ahead, it always seems to bite you in the backside, so for us to win it, it would be awesome and great for the game. I think it would remain iconic young kids’ memory if they are watching it at home,” said Morgan.

Standing in England’s way are the eternal underdogs, New Zealand. The Kiwis who sent the fancied India packing in the semifinal don’t believe in making noise. They have evolved as the trickiest opponents under the ‘iceman’, Kane Williamson, who takes success and failure with an equal measure of dignity.

New Zealand had missed out on the opportunity to lift their maiden title four years ago when they co-hosted the tournament, but now they look primed for the big occasion. Cricket’s profile may not change in a country where the All Blacks rugby team are revered as superheroes. 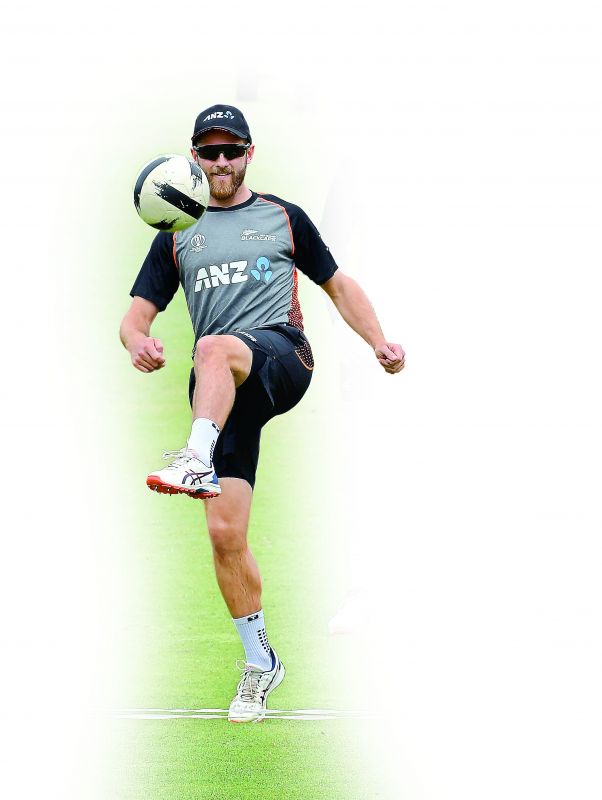 New Zealand captain Kane Williamson plays football as he takes part in a training session at Lord’s Cricket Ground in London on Saturday, eve of the World Cup final against England. (Photo: AFP)

“I would still like to think it would have a really positive impact on the sport in our country,” said Williamson.

The home team would be pinning their hopes on their openers Jonny Bairstow and Jason Roy who have been in red-hot form. Their top three, including run-machine Joe Root, having amassed 1,471 runs between them. New Zealand’s new-ball bowlers Trent Boult and Matt Henry will have to give the team an early breakthrough to unsettle the England side.

The weather on Sunday is expected to be dry and captains would be eager to bat first. Apart from Chris Woakes and tearaway pacer Jofra Archer, Adil Rashid will have a key role to play. The leg-spinner had taken only eight wickets before the semifinals of this World Cup, but his three-wicket haul against Australia underlined his importance in the team line-up.

Lord’s isn’t ever a high-scoring ground and Morgan doesn’t see it changing the trend on the morrow. It will be an enthralling battle.