Southampton: England and the West Indies will carry their intense rivalry from the Caribbean into the Rose Bowl here on Friday with Barbados-born pace sensation Jofra Archer adding spice to the World Cup contest.

Both teams ended at 2-2 in their high-scoring five-match ODI series in February with one game being a washout. The series, which took place in the Caribbean islands, saw sensational performances from Chris Gayle, who smashed as many 39 sixes and amassed 424 runs in four innings.

The ‘Universe Boss’ will be backing himself for an encore against England whose bowling attack has become more potent with Archer’s addition. He has bowled with fire and venom so far in the competition and his face-off with Gayle is the one to watch out for.

Archer, who has played his junior cricket in the Caribbean and qualified to play for England only in April, is a familiar figure for the West Indies camp and it knows what the 24-year-old is capable of.

“To be honest, we knew Jofra for a long time. He is from Barbados, where we are from. We knew him from the U15s, U17s, U19s so he is not new to us. Yes, he’s bowling quickly, but there’s nothing that we are not accustomed to. We are looking forward to the challenge. So we will see how it goes on Friday,” said West Indies coach Floyd Reifer ahead of the game.

West Indies too boast of express pace in their arsenal, adding to the excitement of what promises to be a mouthwatering battle.

The Jason Holder-led side would be itching to take the field after a washout against South Africa at the same venue on Monday. All-rounder Andre Russell, who has had chronic knee issues, was not named in the playing eleven against the Proteas. It remains to be seen if he regains full fitness for the England clash.

England too had their fitness issues with key player Jos Buttler hurting his right hip against Bangladesh but coach Trevor Bayliss said he is expected to be fit for Friday’s game.

The fickle English weather has been a constant concern in this Wo-rld Cup but rain is predicted to stay away for the majority of the game.

‘We have quick bowlers too, so it should be a lively game’

West Indies bowling coach Corey Collymore on Wednesday expressed confidence that his four-pronged pace attack will pose problems for a fancied England side in their upcoming ICC World Cup match.

West Indies take on hosts and tournament favourites England at the Hampshire Bowl on Friday. 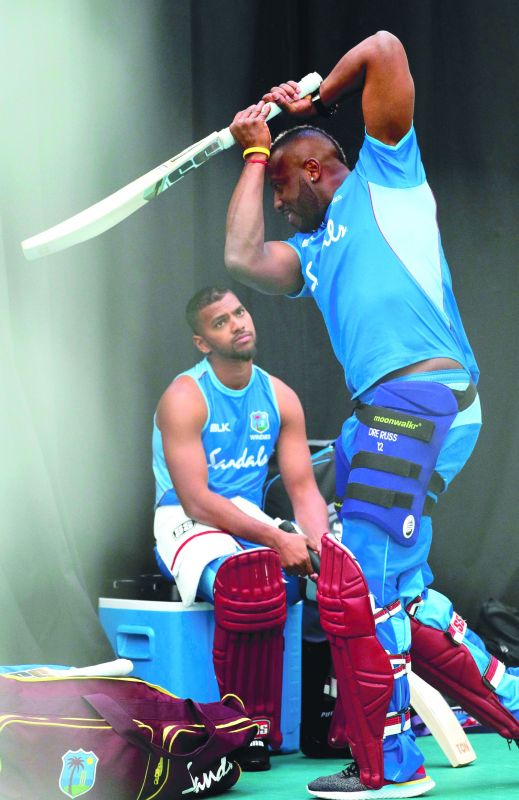 Andre Russell (right) of the West Indies is watched by teammate Nicholas Pooran at a training session at the Rose Bowl in Southampton on Thursday. (Photo: AFP)

“We have quick bowlers too, so it should be a lively game,” said bowling coach Collymore — who also used to bowl around the 90mph mark in his early career.

“We have shown what we can do with our fast bowlers, we are good enough to take wickets with the new ball and then go from there,” he was quoted as saying in the ICC website.

West Indies are coming off their defeat to Australia while England easily saw off Bangladesh in the last game.

Speaking further on fast bowling, Collymore said, “I don’t think many people like the short stuff, whether it is England or the West Indies. If you find a batsman that has a weakness to it, then you go after that.

“From years gone by, that was something we prided ourselves on and now you see we have some more coming thro-ugh.”

England boast two of their own fast men in Jofra Archer and Mark Wood. The 24-year-old Archer bowled the fastest spell ever seen by an Englishman in ODI cricket against Bangladesh last week and he has six wickets in the tournament so far.

Next he is confronted with the challenge of taking on Chris Gayle, who has a strong recent record against England, smashing 39 sixes against them in the five-match ODI series earlier this year.

“Chris thrives on that. I have known him since he was 16 and he has always loved a challenge. He has always enjoyed the challenge of fast bowling so I expect him to relish that,” Collymore said.

Virat Kohli after 10-wicket loss: We were not just competitive enough