The England opener, smashed 91 runs off 53 balls to take home the man-of-the-match award. With this victory, the Gautam Gambir led side registered their first win of the season and inflicted third straight loss on Rohit Sharma's team.

Delhi wicket-keeper Rishabh Pant was the other major contributor with the bat scoring 47 runs off 25 balls. For Mumbai Krunal Pandya was the most successful bowler picking up 2-21 in his three overs.

After losing the toss and being put into bat, Mumbai opened their innings with orange cap holder Suryakumar Yadav and Evin Lewis. The openers gave an explosive start to the home side, as Delhi bowlers were hit for over 10 runs an over in the powerplay.

Both the batsman cleared the boundary ropes with ease as runs began to flow thick and fast. Delhi bowlers Boult, Shami, Nadeem, and Christian saw no respite fro the batsmen, as they were hit for more than 10 runs in an over.

The first real chance for Delhi to get the breakthrough came in the second over. Lewis, who was on 5 runs at that time, went for a slog sweep off Nadeem's delivery only to see the ball finding the top edge and going just over Boult's head as he ran backward to take the catch.

Mumbai raced to 50 runs in just 3.4 overs, as Yadav and Lewis continued their onslaught on Delhi bowlers. Rahul Tewathia bowled a brilliant first over as he conceded just three runs from his leg spin to halt Mumbai's run flow.

Mumbai raced to their 100 in just 8.3 overs. Spinners Rahul Tewatia and Glenn Maxwell managed to pull things back for Delhi in the middle overs as they hardly gave Mumbai batsmen to free their arms. The away side got their first breakthrough in the 9th over as Lewis(48 runs) miscued Tewatia delivery to Jason Roy at long off falling two runs short of a half-century. The opening pair put on 102 runs stand for the opening wicket.

Yadav also brought his fifty in just 29 balls before being caught LBW for 51 runs by Tewatia, who picked up his second wicket in the 11th over. The spinner bowled brilliant first three overs conceding 17 runs and picking up 2 wickets. The bowler saw his final over been hit for 19 runs to finish with figures of 2-36 as Mumbai brought up their 150 runs in 14.1 overs.

It looked like Rohit and Ishan laid the platform for the final flourish in the last five overs, but their 57 run stand was finally ended by Daniel Christian who clean bowled Kishan for 44 runs of 23 balls. Pollard couldn't inflict major damage as the Australian all-rounder dismissed him for a golden duck in the very next delivery. The away side finally managed to pull things back in the final five overs giving away 35 runs and picking up five wickets to halt Mumbai innings at 194 runs for the loss of 7 wickets.

Delhi got off to a decent start thanks to their openers Jason Roy and Gautam Gambhir, the duo brought up team's 50 in just 29 balls. Roy went after Hardik Pandya as he smashed the Mumbai bowler for 21 runs in his second over. Mustafizur gave the home side the first breakthrough in the 6th over, dismissing skipper Gambhir for 15 runs caught by Rohit Sharma.

Rishabh Pant joined Jason Roy at the crease, as both the batsmen went after Mumbai spinners Akila Dananjaya and Mayank Markande. Roy was severe on Markande, as the purple cap holder conceded 27 runs in his first two overs. Dananjaya, who conceded 5 runs in his first over, was hit for 18 runs in his second over by Pant as Delhi reached 100 runs in 10th over.

Jason Roy completed his half-century and it looked like both the batsmen will take away the match from Mumbai's grasp, but their 60 run partnership was ended by Krunal Pandya as he dismissed Pant for 47 runs, caught by Pollard at long off.

Glenn Maxwell innings was also shortlived after he was brilliantly caught by Hardik Pandya for 13 runs at long on to give his brother Krunal his second wicket of the match. 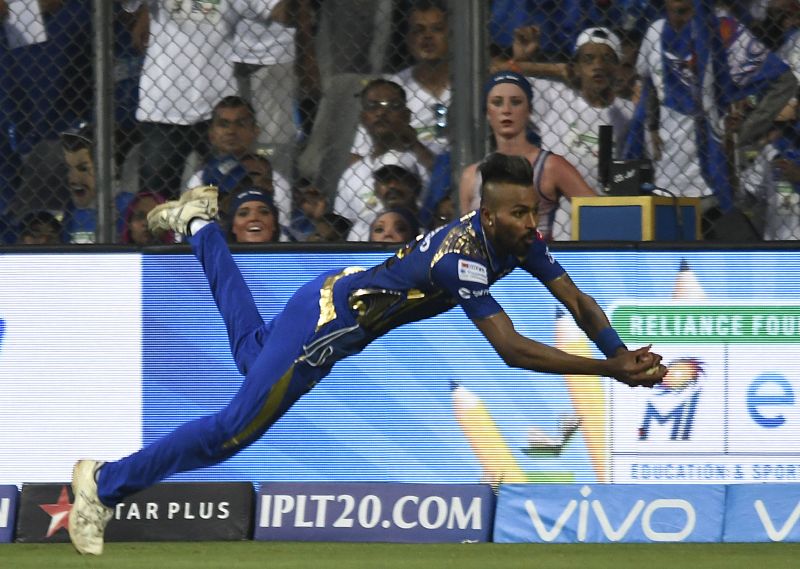 The match was evenly balanced as Delhi needed 35 runs off 24 balls and with Roy at the crease the away side was very much in contention to win their first game. As the game came down to the final few deliveries there was more drama in the action as Shreyas Iyer received two lifelines in from  Mustafizur Rahman, who failed to latch onto to catches off Bumrah's bowling.

The Bangladeshi bowler, who was handed the responsibility to bowl the final over, almost took the game to the super over, but Roy ensured that his team crossed the finish line in a tense finish.