This is why India will win 2019 World Cup, even MS Dhoni likes it!

There are still doubts about MS Dhoni's future for the ICC 2019 World Cup in England and Wales. (Photo: PTI)

Mumbai: Unlike many other cricket players, MS Dhoni isn’t highly active on social media despite having a huge amount of followers. The former India captain also has a reserved persona and likes to keep things secret, on and off the field.

However, the veteran India batsman raised many eyebrows on Wednesday after he liked a tweet. Moreover, the tweet was a highly controversial one posted by Hindi news handle InKhabar. 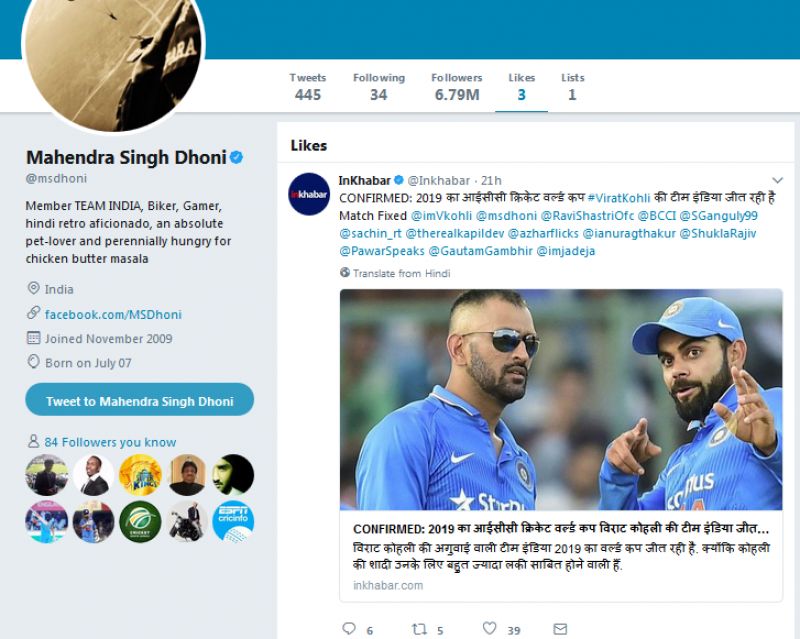 The media outlet claimed that the upcoming ICC 2019 World Cup scheduled to be played in England and Wales is fixed, and Virat Kohli’s Team India are set to lift the prestigious trophy.

As confusing as it may seem, the report also claims that since the India skipper recently tied the knot with Anushka Sharma, the Men in Blue are guaranteed to lift the cup. It states that all India captains who have led the team after marrying have achieved success, and with Virat having tied the knot, India will once again get the cup back home.

Former Indian skipper Kapil Dev, who married wife Roma Bhatiya in 1979, was the first ever captain to help India lift the trophy in 1983. The fate continued in 2011 as MS Dhoni ended India’s 27-year-wait, just a year after wedding Sakshi Singh Rawat.

Rohit Sharma-led India is currently playing Sri Lanka in a limited over series, consisting of 3 ODIs and as many T20 series.

Their true potential will be tested when they leave for an overseas tour of South Africa, set to take place in January 2018.