A spectator hugs Indian captain Virat Kohli after breaching security and running on to the ground during the India vs West Indies cricket Test at RGICS on Friday. — P. Surendra

Hyderabad: A 20-year-old man from Kadapa of Andhra Pradesh who ran onto the ground during the second Test match between India and West Indies to take a selfie with Indian captain Virat Kohli was booked in a case of assault, trespass and criminal intimidation by the Uppal police on Friday.

One Mohammed Khan (20) hailing from Kadapa ran onto the ground at the Rajiv Gandhi International Cricket Stadium during the morning session of the match which was held under high-security. Khan climbed and jumped the barricade and ran towards Kohli, who was fielding at mid-wicket. 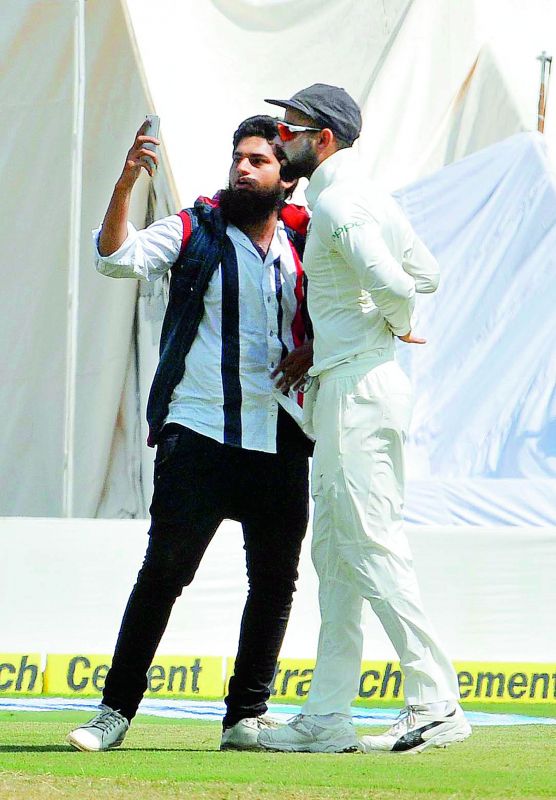 Mohammed Khan takes a selfie with Virat Kohli after running on to the ground on Friday. — P. Surendra

Khan was seeing hugging Kohli, despite the latter pushing him away. He also took a selfie with Kohli before the security personnel took him away.

Uppal inspector P. Venakteshwarlu said “based on a complaint by Hyderabad Cricket Association, a case has been booked against Mohammed Khan under Sections 351, 448 and 506 of IPC. He will be remanded to judicial custody.”

Inspector Venkateshwarlu also said that action will be initiated against Neredmet sub-inspector Prabhakar, and constables Srinu and Narayana, for not preventing Khan from entering the ground.

The inspector said that a similar incident had happened at the RGICS when India played Bangladesh.