A win for Pakistan in the series, by a 2-1 or 3-1 margin, will help it take the second place, a position it has occupied only once since the officials rankings were launched in 2003. (Photo: AFP)

Dubai: India held the second position with third-placed Pakistan breathing down its neck, while Ravichandran Ashwin topped the all-rounders list besides being placed second in bowling in the latest ICC Test rankings released on Tuesday.

England face Pakistan in the upcoming four-Test home series knowing that it is within striking distance of overtaking the opposition in the ICC Test team rankings.

Trailing by a mere point, Pakistan could leapfrog India into second place if it wins the series 2-1 or 3-1.

The minute difference in points between India, Pakistan and England throws up a number of interesting scenarios ahead of the Test series between hosts England and Pakistan.

A win for Pakistan in the series, by a 2-1 or 3-1 margin, will help it take the second place, a position it has occupied only once since the officials rankings were launched in 2003. 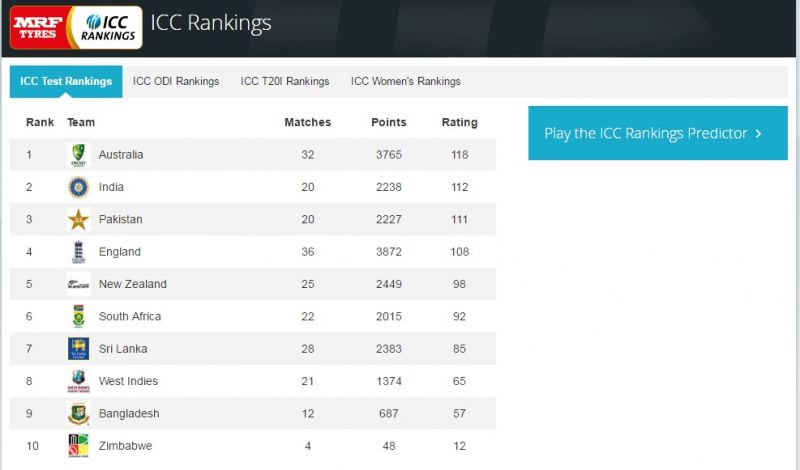 Many interesting scenarios pop up due to the minute gap in points between the top four teams, (Photo: Screengrab taken from the official website of International Cricket Council)

Pakistan even has a chance to surge to the top of the rankings, replacing current world number 1 Australia, but to make this happen it will have to win 3-0 or better.

England, who recently defeated Sri Lanka 2-0 in a three-Test home series, is only three points behind Pakistan at 111. This means that margins of 2-1 or 1-0 win will be enough for it to go past world number 3 Pakistan in the points table as either of these results will see England lift to 110 points and Pakistan slipping down to 107.

India is due to take on the West Indies in a four-Test series that ends a week after the England-Pakistan series. In case England is able to capitalise on the home advantage, it can rise to second position with a 3-0 win and to 114 points if it wins all the matches.

England's Joe Root will start as the highest-ranked batsman from either side in fourth place. The Yorkshire batsman will be keen to convert his poor run of form, which has seen him drop two places and 52 points following an ordinary series against Sri Lanka.

Captain Alastair Cook (12th) and in-form Jonny Bairstow (18th) are the other England batsmen to feature inside the top 20, who along with Ben Stokes (37th) and Moeen Ali (39th) will be aiming to make upward movements.

Bairstow has a chance to break into the top 10 if he continues the kind of form he showed in the recent home series against Sri Lanka, in which he aggregated 387 runs including an unbeaten 167 at Lord's.

Younis Khan, who had become his country's first batsman to complete 9,000 Test runs last season against England, is the highest-ranked batsman in fifth position.

He trails Root by 11 points and will be eyeing a top three finish by the time the series concludes in mid-August at The Oval.

Australia's Steve Smith leads the field and he is followed by Kane Williamson of New Zealand and South Africa's Hashim Amla.

In the MRF Tyres Player Rankings for Test Bowlers, Anderson is likely to slip from his one-number position after a shoulder injury has sidelined him from the Lord's Test. As each player is docked one per cent of his points for each Test he misses, Anderson is set to drop behind India's Ravichandran Ashwin, whom he leads by six points.

England's third-ranked Stuart Broad will be the highest-ranked bowler going into the first Test. He is followed by Pakistan's wrist-spinner Yasir Shah, who is still 24 wickets away from attaining the full ranking that comes with 100 Test wickets, but has a good chance of making it to the number one position this season.

■R Ashwin will be key against West Indies: Sourav Ganguly
■Ravichandran Ashwin injures forearm ahead of WI tour
■Captain Kohli, coach Kumble and the Caribbean calypso!
■Will be the last person to curb Kohli’s aggression: Kumble