Delhi: Such is the craze for cricket in India, that players are not only adored but worshipped. Fans even go to extreme limits to ensure they get a close glimpse of their idols.

On Saturday, during the 2018 Indian Premier League (IPL) game between Delhi Daredevils (DD) and Royal Challengers Bangalore (RCB) at the Feroz Shah Kotla Stadium in Delhi a die-hard Virat Kohli fan broke all barriers to meet the Team India skipper.

Out of nowhere during the match, the fan breached the security and ran towards Kohli on the cricket pitch before bowing down to his feet. Not only that, the young man even got an opportunity to click a selfie with the stylish right-hander.

Didn't I tell you? He doesn't has Fans, He has Devotees. 🙏❤ And also when the security took him away Vee was like Be careful Be careful! How sweet! ❤ And still ppl call him egoistic and Selfish! Those ppl can rather die instead of speaking Shit about such a genuine personality. 🔥❤ . . . @virat.kohli #vee #virat #kohli #viratkohli #kohlivirat #anushkasharma #anushka #nushkie #couplegoals #cutest #babe #virushka #virushkaforever #virushkalove #virushkawedding #viratians #proudviratian #extremelyvirat #viratians #love #loveu #runmachine #cheeku Video credits:- @sureshraina.addicts

The security personnel had to soon make his way and escort the fan out of the cricket field to resume action. 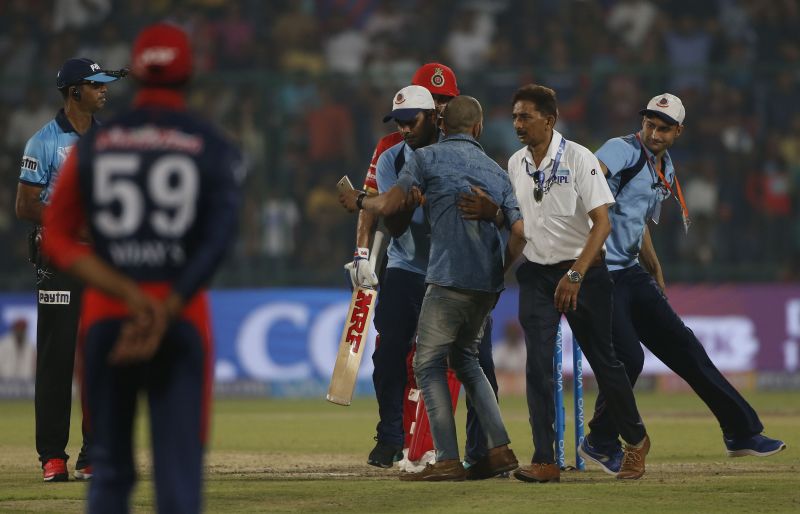 Half-centuries by AB de Villiers and captain Kohli led Royal Challengers Bangalore past Delhi Daredevils by five wickets and in the run for the IPL playoffs on Saturday.

De Villiers (72 not out) and Kohli (70 off 40 balls) finally showed their class in a 118-run, third-wicket match-winning stand as Bangalore reached 187-5 with an over to spare.

Delhi, out of contention for the playoffs, scored 181-4 after Kohli won the toss and opted to field.

Pant and Iyer put on 93 runs for the third wicket, and Abhishek Sharma smashed 46 off 19 balls as Delhi scored 61 runs in the last five overs.

Kohli hit seven fours and three sixes before he was caught behind off legspinner Amit Mishra while going for a drive over covers.

But de Villiers, who hit six sixes and four boundaries in his 37-ball knock, made sure Bangalore didn't suffer any more hiccups and raised the victory by smashing Trent Boult (2-40) over the long off boundary.

Bangalore moved to seventh in the standings after its fourth win, and needs to win its remaining three games to stay in the hunt for the top four.

Delhi remained at the bottom of the table after a ninth loss in 12 games.

"The table is wide open, right time to get the win," Kohli said.

"Bowling first is better in this stage, because it's easier for batsmen to take responsibility. You can almost set up the game how you like. That's what works for our boys."

Batra, Mukherjee off to promising start in singles after defeat in mixed doubles