Kanpur: Faced with a do-or-die situation, defending champions Sunrisers would go all out against a struggling Gujarat Lions and clinch the last-available spot in the IPL Play-offs, when the two teams clash, on Saturday.

With 15 points from seven wins and five losses in 13 games, Sunrisers are currently placed at the fourth spot.

If Sunrisers lose against Gujarat tomorrow then their play-off hopes will depend on the match between Rising Pune Supergiant and Kings XI Punjab in Pune on Sunday. They would need Supergiant to beat Punjab to make it to the Play-offs. 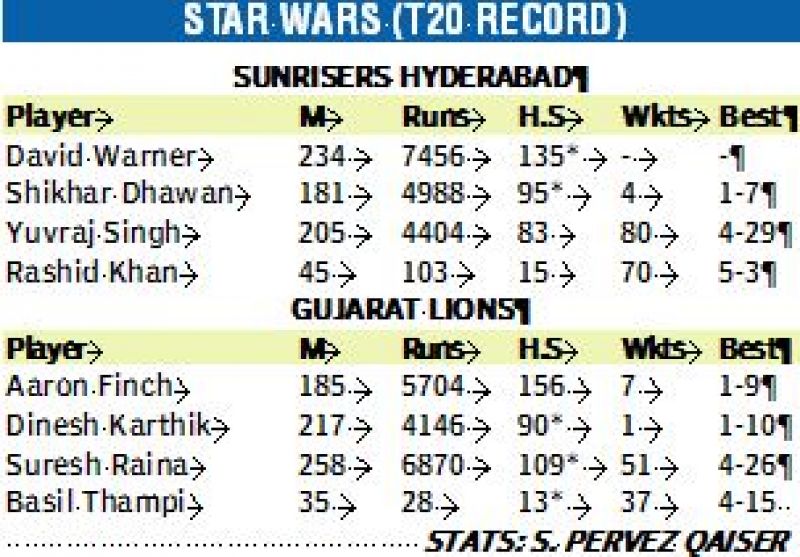 Going into the match, Sunrisers are the favourites as they seemed to have the most balanced side in the tournament with Warner and Bhuvneswar Kumar currently grabbing the orange and purple caps respectively.

For Sunrisers, Warner and Shikhar Dhawan have done bulk of the scoring and emerged as the highest run-getters of the season. They are placed at No. 1 and No. 2 spots in the most runs list this season with 535 and 450 runs respectively from 12 matches each.

Their bowling unit too have delivered with Bhuvneshwar claiming 23 wickets so far, while Siddarth Kaul and Rashid Khan have claimed 15 and 14 wickets respectively.

Gujarat, on the other hand, have been inconsistent but they still possess the firepower to disrupt Hyderabad’s applecart.

The Lions have a power-packed batting line-up with skipper Suresh Raina delivering the goods with 440 runs so far in the tournament.