India's KL Rahul celebrates scoring his half-century on the first day of the second cricket Test match between England and India at Lord's cricket ground in London on Wednesday. (Photo: AFP)

3:00 PM IST: Good afternoon and welcome to the live coverage of the second Test match of the Pataudi Trophy between India and England. The first Test between the two heavyweights ended in a draw after rain played spoilsport.

India's bowling attack looked in fine shape before the rain delays, and Virat Kohli's men will hope to continue their run in the second Test.

Both teams kicked off the 2021-23 edition of the World Test Championship (WTC) and earned four points each after the last match because of their draw.

3:03 PM IST: Rain delays the toss as the covers were put due to a slight drizzle over the pitch. However, the good news is that the groundskeepers have begun taking off the covers.

Good afternoon and welcome to the live coverage of the 2nd Test between India and England at the Lord's.

Rain played spoilsport in the last match and both teams will for better fortunes this time round.

Team news: Three changes for England, with Mark Wood replacing the injured Stuart Broad. However, James Anderson makes it to the XI after an injury scare during the week.

Only one change for India, with Ishant Sharma taking the injured Shardul Thakur's place. In a surprising move, Ravichandran Ashwin misses out for a second straight Test!

3:45 PM IST: Rain gods are playing spoilsport yet again after the players were forced off the pitch even before a ball could be bowled. And now the covers are back on as well... Fans and players are keeping their fingers crossed...

4:00 PM IST: And we're off! James Anderson bowls the first over for England, while Rohit Sharma and KL Rahul open the batting for India

5:00 PM IST: Rohit Sharma and KL Rahul have taken their time to settle in, before Sharma thrashed 16 runs off Sam Curran's last over heading into the drinks break.

5:30 PM IST: The covers come back on as rain returns to create havoc at the Lord's. 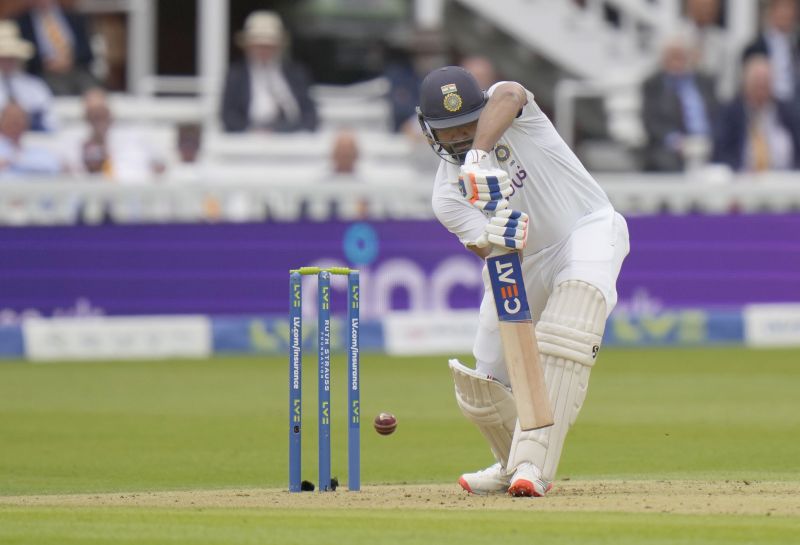 India's Rohit Sharma plays a ball off England's Ollie Robinson during Day 1 of the 2nd cricket test between England and India at Lord's cricket ground in London on Thursday. (Photo: AP)

5:20 PM IST:  Rain forced the hands of the referees who used the delay to call an early lunch but now we are back as Rohit Sharma and KL Rahul hope to continue their dominance in between the wickets.

Fun fact: This is India's first 50-run partnership in the 1st innings at the Lord's since 1952!

The star opener continues his fine forays and scores the first half-century of the Test.

6:50 PM IST: First maximum of the match and it is none other than beloved Rohit to get the ball over the boundary.

7:20 PM IST: 100-run opening partnership for KL Rahul and Rohit Sharma as they hold on to India's dominance in the middle of the park.

8:40 PM IST: KL Rahul continues where Rohit left off, hitting a half century for a second time in the ongoing series.

8:45 PM IST: India keep the pressure on their opponents after a fine batting performance in the first two sessions of Day 1. Rohit Sharma began the onslaught and after his dismissal, KL Rahul has continued to carry the mantle. Heading into the final session of the day, Kohli and Rahul will hope to stay in the driving seat for the remainder of Day 1.

10:44 PM IST: Heading into the final 45 minutes of Day 1, KL Rahul inches closer to his century, a major achievement for the opener.

10:56 PM IST: KL Rahul creates history! Scores a century at the Lord's, entering a list of elite players to achieve this feat.

11:26 PM IST: Virat Kohli dismissed by Ollie Robinson! The skipper edged the ball straight into the hands of Joe Root.

11:52 PM IST: India are in control of the second Test with a strong performance from Rohit Sharma, KL Rahul and Virat Kohli. They will hope to continue their dominance on Day 2 and post a large enough score to take control of the match and secure an important win and a lead over their rivals.

That's all from Day 1's action at the Lord's tune in at 3:30 tomorrow for the beginning of Day 2 action.

■Lord's Test: Thakur injury may bring back Ashwin as India aim for better batting show
■Three things we learned from the first Test between England and India
■BCCI officials to interact with Shastri and team during Lord's Test
■Broad suffers injury during warm-up ahead of 2nd Test against India
■Lancashire seamer Saqib Mahmood called as cover for 2nd Test, spinner Bess released