England fast bowler Chris Woakes appeals during the second semifinal against Australia at Edgbaston in Birmingham on Thursday. (Photo: AFP)

BIRMINGHAM: The World Cup will coronate its new champions at Lord’s on Sunday. Hosts England ended Australia’s title defence with an eight-wicket drubbing in the second semifinal here at Edgbaston on Thursday to come within touching distance of clinching their maiden crown. The three-time runners-up will lock horns with New Zealand in the final at Lord’s.

Even though the current England side who boast some of the finest limited-overs batsmen in their line-up are one of the favourites coming into the World Cup, the meek surrender of the five-time champions, Australia, was shocking. 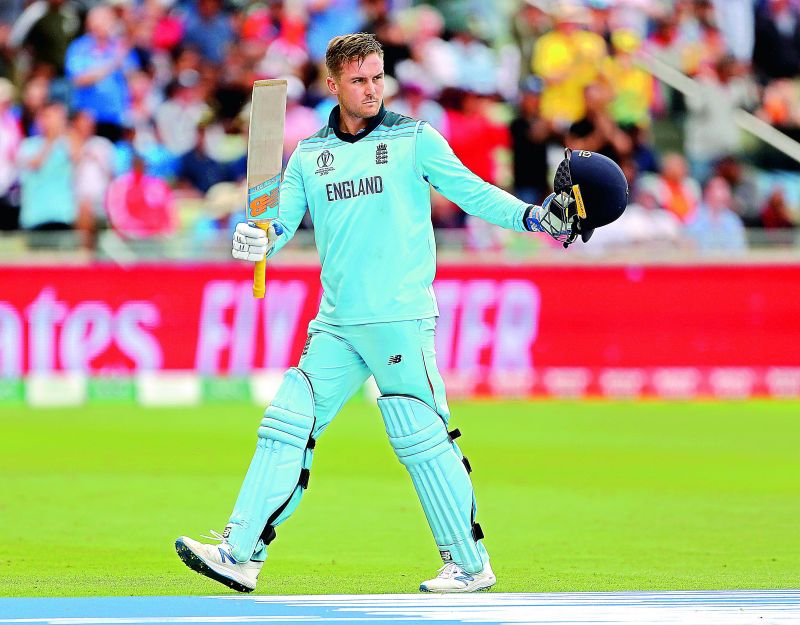 England opener Jason Roy raises his bat to acknowledge applause from the crowd as he leaves the field after scoring 85 in the semifinal against Australia at Edgbaston in Birmingham on Thursday. (Photo: AP)

Jason Roy (34 off 43 balls) and Jonny Bairstow (85 off 65 balls), the best opening pair of the edition, led England’s rollicking chase with a stand of 124 runs. They took the Aussie new-ball attack head-on.

Starc, however, severed the partnership by pinning Bairstow lbw soon after Roy smashed three consecutive sixes off Smith. It was Starc’s 27th scalp of the tournament and he thus surpassed his illustrious countryman Glenn McGrath who took 26 wickets in the 2007 edition.

Roy was seething in anger when umpire Kumar Dharamsena adjudged him caught behind. Not realising that Bairstow had used up the DRS review, Roy stood his ground and had an argument with the umpire. The replays, however, suggested that there was no contact between bat and ball.

Joe Root (49 not out) and Captain Eoin Morgan (45 not out) then ensured there were no further blips. Their unbroken stand of 79 helped them cross the finish line with 17.5 overs to spare.

Steve Smith waged the lone battle with 85 after Australia’s decision to bat first backfired big time. Skipper Aaron Finch was trapped by Archer for a first-ball duck, while Woakes sent David Warner and Peter Handscomb packing to leave Australia’s top-order in a shambles at 14 for 3.

If not for Smith’s fourth-wicket stand with in-form Alex Carey, Australia wouldn’t have crossed the 200-run mark. Carey who has enjoyed a great World Cup looked fluent, but he fell four runs short of what would have been a well-deserved half-century. Carey’s knock was gritty as he had taken a blow on his chin off an Archer bouncer. Smith and Carey put on 103 runs.

Mitchell Starc chipped in with 29 off 36 down the order as the Aussies were bowled out with an over to spare.