Pakistan needed a 3-0 win against the Windies in the three-match ODI series, in order to get direct qualification for the 2019 50-over World Cup; they only managed to notch-up a 2-1 series win. (Photo: AFP)

Dubai: Pakistan and West Indies have tough task at hand as they fight to get direct qualification for the 2019 ICC World Cup, after they were placed at the eighth and ninth position in the ICC ODI rankings respectively, on Wednesday.

The two teams completed a three-match ODI series on Tuesday, which the Pakistanis won 2-1. West Indies had gotten off to a good start in the tournament, after they chased down a target of 309, their highest successful run chase in ODI history. 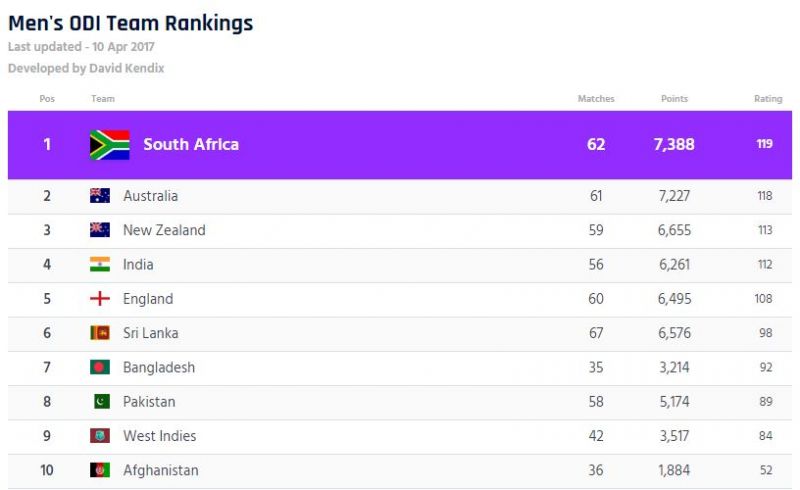 However, Pakistan came back in the next two games, to clinch the series 2-1.

Unfortunately for Pakistan, they needed a 3-0 win against the Windies, in order to get direct qualification for the 2019 50-over World Cup.

Bangladesh, on the other hand, qualified for the World Cup, after finishing seventh in the ICC ODI Rankings.

“This (West Indies vs Pakistan ODI series) was the final series before the annual update is carried out on 1 May to ensure the table continues to reflect teams’ recent form with older results being discarded. This means that when the ODI team rankings are overhauled on 1 May, the table will reflect all matches from 1 May 2014 with matches played from 1 May 2016 to carry 100 per cent weighting,” added the cricket's governing body.

South Africa, Australia, New Zealand, India, England, Sri Lanka, and Bangladesh are the seven countries to have qualified for the 2019 world Cup, as of yet.