The cricket fraternity has been hit by #MeToo after an Indian flight attendant took to Facebook on Wednesday, accused Arjuna Ranatunga, former Sri Lanka skipper and the current Sri Lankan Minister of Petroleum Resources Development, of sexually harassing her by the poolside of the hotel in India. (Photo: AFP)

Mumbai: The #MeToo movement has rocked the Indian Bollywood and media fraternity, with Tanushree Dutta accusing Nana Patekar of sexual harassment on the film sets in 2008 and Vinta Nanda and Sandhya Mridul accusing Alok Nath of the same.

Now, the cricket fraternity has been hit by the storm after an Indian flight attendant took to Facebook on Wednesday, accused Arjuna Ranatunga, former Sri Lanka skipper and the current Sri Lankan Minister of Petroleum Resources Development, of sexually harassing her by the poolside of the hotel in India.

She alleged that Ranatunga grabbed her by her waist during one of his visits to India. While it is not clear in which year the incident had taken place, she added that she screamed, kicked on his legs and ran to the reception of the hotel to report the matter. However, she said she was told that it was her “personal matter”.

"My star struck colleague spotted Indian and Sri Lankan cricketers in the elevator of Hotel Juhu Centaur, Mumbai and decided to meet them in their room for autographs. I decided to chaperone her, fearing for her safety, we were offered drinks (perhaps laced) I declined and stuck to my bottle of water I'd brought along . They were 7 and we 2, they latched the room door putting the chain secure. My discomfort growing inside of me, I urged her to get back to our room,” she said in a Facebook post.

"She was smitten and wanted to go for a stroll by the poolside, this was at 1900 hrs, the walk to the pool a desolate, unlit pathway at the back of the hotel, I look back to find (her friend) and the Indian cricketer nowhere in sight,” she added.

"Ranatunga grabs me by waist, sliding his hands along the side of my breasts, I scream fearing the worst, kicking on his legs and feet. Threatening him of dire consequences, passport cancellation, reporting it to the cops etc., for he is a Sri Lankan misbehaving with an Indian. Wasting no time, I dashed for the hotel reception a good run on an incline screaming on top of my voice. The reception said, "it is your private matter" and that they can't help me," she said in her Facebook post. 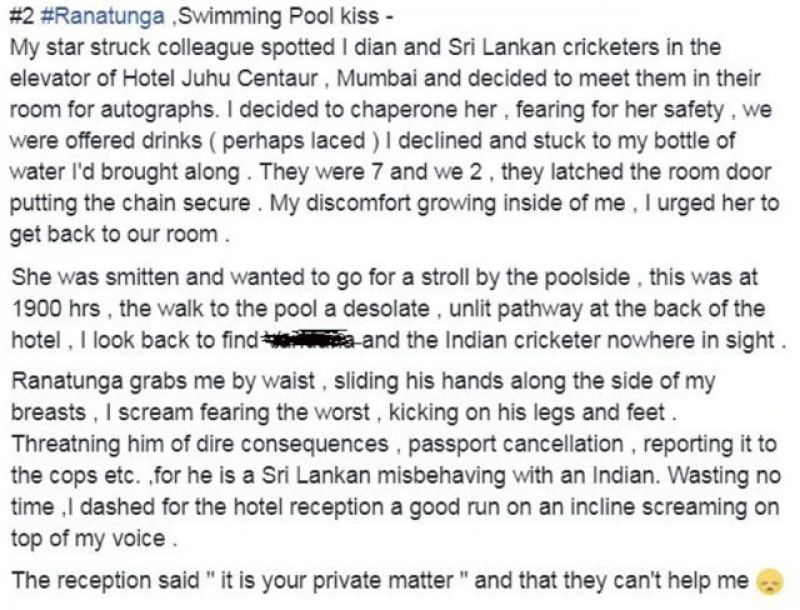 Ranatunga, who played 296 ODIs and 93 Tests, was the captain when Sri Lanka beat Australia in the final to win the 1996 World Cup.

Compared to 1st two games, we will have to show a lot of patience on SCG pitch: Siraj

New Zealand sweep series, are No.1 in Tests