Members of the Indian team are distraught at the Old Trafford pavilion after being knocked out of the World Cup by New Zealand in the first semifinal at Manchester on Wednesday. (Photo: AP)

MANCHESTER: It was a day of the underdogs. New Zealand punched above their weights to run through the famed top-order and India almost found an unlikely hero in Ravindra Jadeja, but it was the affable Kiwis who eventually completed a thrilling against-the-odds win in the rain-stretched semifinal here at the Old Trafford ground on Wednesday.

New Zealand, who won by 18 runs, will meet either Australia or England in the final to be held at Lord’s on Sunday.

Jadeja, who wielded his willow like a sword, led the fight and slammed a blistering half-century (77 off 59 balls) in the calm company of M.S. Dhoni (50 off 72 balls) to raise hopes an incredible win, but Kiwis brilliant effort on the field denied India the entry into the final. From 92 for 6, Jadeja and Dhoni took the game to the wire with a partnership of 116 runs off 112 balls, the highest ever seventh-wicket stand in World Cups. They had brought the equation from 90 off 60 to 42 off 24. 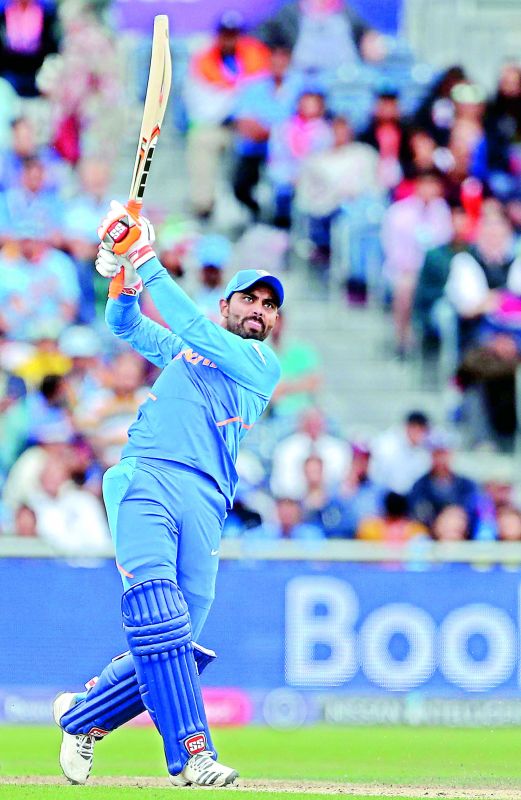 Ravindra Jadeja plays a shot during the semifinal against New Zealand on Wednesday. (Photo: AP)

Jadeja celebrated his fifty by raising his arms towards the commentary box in an apparent gesture to Sanjay Manjrekar who had ridiculed him as “bits and pieces player.”

India still had a chance with 32 runs required off 14 balls. The stage was set for Dhoni, playing his last World Cup innings, to rewind the clock. A fierce cut over the point boundary, much to the jubilation of the crowd, showed glimpses of the vintage Dhoni, but it didn’t last long though. The pivotal moment came when Martin Guptill, who had come a cropper in batting, sprinted from the deep midwicket boundary to run Dhoni out. His direct-hit was a thunderbolt that poured cold water over India’s hopes of entering the final. The disappointment was palpable when Dhoni walked back, shaking his head.

What was expected to be a convincing chase of 240 on a bright and sunny day turned out to be all gloom and doom for the blues. The crowd was still coming through the turnstiles when India lost their in-form opener Rohit Sharma to a cracker of a delivery. Matt Henry reaped a huge reward for his probing line as the ball that kissed the bat of Rohit landed safely in wicket-keeper Tom Latham’s gloves. It was 4 for 1 and game on!

Henry and his new-ball partner Trent Boult produced a sensational opening spell. The carrot kept dangling in front of the batsmen as the Kiwi pacers moved the ball around brilliantly. A deathly silence ensued when Virat Kohli’s LBW referral became unsuccessful. The walk back to the dressing room was long and frustrating for the Indian skipper. Then they slumped to 5 for 3 with KL Rahul nicking Henry. All three batsmen fell for identical scores.

The last time India lost both Rohit and Kohli for single digits was in the final of the 2017 Champions Trophy which they had lost to Pakistan in England.

Coming in at No.4, young Rishabh Pant exuded confidence when he punched through the covers. Dinesh Karthik played out 20 dot balls before getting off the mark with a boundary off Boult. Jimmy Nesham pulled off a brilliant one-handed catch at the backward point to end Karthik’s short stay in the last ball of the powerplay. By the time Boult (6-2-15-1) and Henry (7-1-23-3) ended their first spell, they had already wreaked havoc.

The perturbed look on coach Ravi Shastri’s face reflexed the mood in the Indian dressing room. The animated conversation between Shastri and Kohli at the players’ balcony added to the drama. India would have been five down for 36 had Neesham — who had taken a blinder to dismiss Karthik — held on to a simple catch from Pant who was on 18. India crawled their way to 50 in 16.5 overs.

Trying to break the shackles against left-arm spinner Mitchell Santner, Pant ended up digging his own grave. His impressive 32-run knock came to an end with Colin de Grandhomme pouching a simple catch at the deep midwicket. Firing in as many as 29 dot balls, Santner bowled an incredible spell of 6-2-7-2. India needed 148 runs off 120 balls when M.S. Dhoni joined Pandya in the middle.

Earlier, New Zealand added just 28 runs to their overnight total of 211 with Jadeja’s brilliance on the field restricting them.