A fit-again Umesh Yadav is likely to replace Ankit Rajpoot in the bowling line-up for their match against Kings XI Punjab. (Photo: BCCI)

Umesh is likely to replace an out of place Ankit Rajpoot.

"Umesh Yadav is all geared up to make a thumping start in IPL," KKR posted a working-out picture of the 29-year-old who tweeted: "Ami KKR... First day with my team training time." 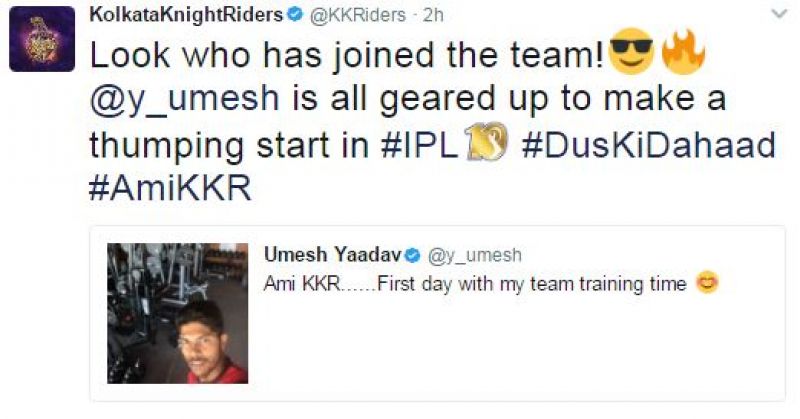 The pacer missed the first two KKR matches due to right hip and lower back soreness after a gruelling home season where he played 12 of the 13 Tests.

On spin-friendly conditions, Yadav was incisive with his new-found rhythm as he gave vital breakthroughs to finish the season as India's third-highest wicket-taker behind Ravichandran Ashwin and Ravindra Jadeja.

A fit-again Yadav is likely to replace Ankit Rajpoot in the bowling line-up for their match against Kings XI Punjab, who have posted back-to-back victories.

Yadav's return will be a big boost to the side who lost to Mumbai Indians in their last leg in a match their star opener Chris Lynn aggravated an old injury on his left shoulder.

"All those anxious about Lynn. He aggravated an old injury. Being treated and under observation by KKR team," team CEO Venky Mysore posted on his Twitter handle.

The Aussie who made a T20I debut in January 2014 had undergone an operation on left shoulder in the same year for a rotator cuff problem.

The Queenslander captain had a similar situation in 2015 when he injured the same shoulder during fielding.