The cap was originally purchased in Leski Auction in May 2003, with original Certificate of Authentication.

Mumbai: It was revealed by an Australia auctioneer, Charles Leski, that Sri Lanka and India's former captains Hashan Tillakaratne and Sunil Gavaskar, along with Pakistan's renowned cricketers Zaheer Abbas, Intikhab Alam's and Javed Miandad’s test attires will be auctioned on Sunday 11th August.

Hashan Tillakaratne's Sri Lanka Test cap has dark blue wool with the Sri Lankan lion emblem embroidered to the front. It also has an Albion label and is signed by Tillakaratne on the inside and is attractively framed.

The cap was originally purchased in Leski Auction in May 2003, with original Certificate of Authentication.

However, Tillakaratne denied have ever gifted his cap for auction.

Speaking exclusively over telephone from Colombo, he said, "My Test cap is kept in a museum at my home. You are welcome to see it. I can never sell my national pride and treasure for money".

Tillakaratne has even sent the photographs of the Test cap.

The auctioneer, however, claims that the Test cap, which will be put online, is a genuine one.

"This cap has been signed internally by Hashan Tillakaratne. I am sure he would not sign a cap that did not belong to him."

The present vendor purchased the cap during our public auction on May 22nd, 2003, where it was offered as Lot 434. Mr Tillakaratne did not object to the description or sale at that time. Furthermore, it was not the only cap offered at that auction which had previously been Mr Tillakaratne’s. 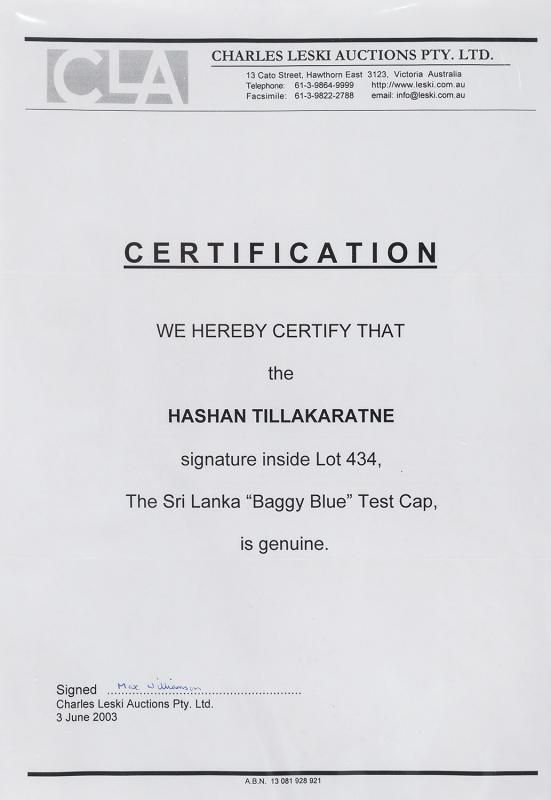 "Lot 433 in that catalogue, also signed by Tillakaratne, was from the period when the Sri Lanka caps had an embroidered elephant symbol on a pale blue patch embroidered to the front of the cap", added the auctioneer.

"Both of these caps were offered for sale on behalf of Mr Keith Attree of Perth, Western Australia.

"Mr Attree, a former senior police officer, who is no longer alive now, became a long-term volunteer assistant in the visiting team rooms at the W.A.C.A. after his retirement".

"It appears to us that Mr Tillakaratne has simply forgotten the occasion (or occasions) in Perth when he and Mr Attree met", the auctioneer signed off.