The couple have wasted no time in making fans aware of the picturesque location. (Photo: Instagram)

Mumbai: Newly-wed couple Zaheer Khan and Sagarika Ghatge are currently making the most of their honeymoon in Maldives. The couple have wasted no time in making fans aware of the picturesque location.

Thrilled to have completed our first dive . See the happy faces 🌊 @zaheer_khan34

Sagarika recently shared a photo from the vacation on Instagram which shows the former India pacer relaxing on a hammock, enjoying the sunset view by the sea. The picture drew a hilarious response from tennis star Sania Mirza, who commented, "Looks like he is honeymooning alone." 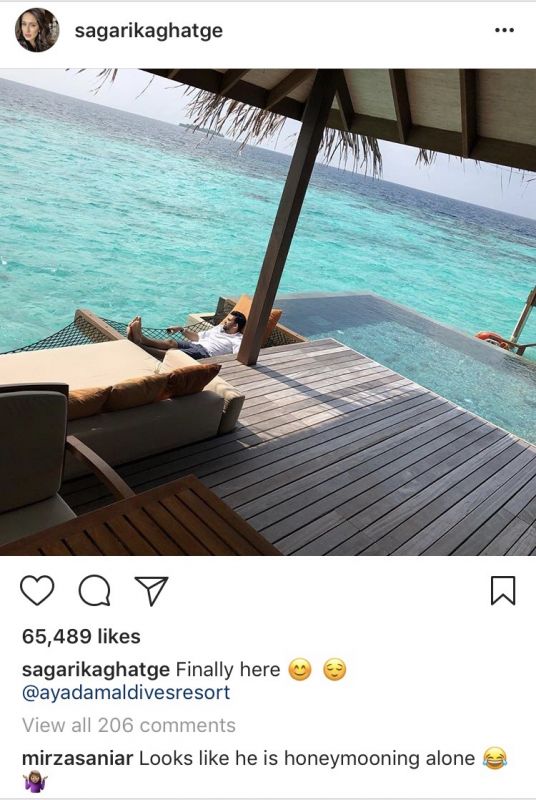 Earlier, the couple also revealed how their families were open to their relationship despite the religion barrier.

“We didn't face any such issues. Both our families are evolved enough to understand that it's about marrying the right person over marrying into the same religion. It's important to be a good human being. We are going to stay away from both (nikaah and saat pheras). It will be a court marriage on November 27 in Mumbai. There will be a pre and post wedding functions. I am planning to have something in Pune as well, so the ceremony will go on for a few days. We want this to be a get-together for close friends and family,” Zaheer was quoted saying by Bombay Times.

“My parents are also open-minded and their primary concern was that I marry the right person. I am sure they may have had their apprehensions, but after meeting him, it cleared a lot of things for them. He is perfect. We are also planning to have something in my hometown Kolhapur, sometime later,” Sagarika stated.