Mumbai: Indian cricketer Gautam Gambhir has come out in support of the 1998 Asian Games gold medallist Dingko Singh, who has been suffering from bile duct cancer.

Dingko recently underwent a life-saving operation after suffering from cancer. During the procedure, 70 per cent of his liver had to be removed. It was earlier reported that former Indian boxer Dingko’s family has been left in a financial crunch due to the unfortunate incident.

“We have already spent Rs 10 lakh so far and are really worried how we will manage the money for treatment. We definitely need help,” Dingko’s wife was quoted as saying by The Indian Express.

According to reports, Gambhir has extended financial support to the former Indian boxer. The cricketer, however, has opted not to publicise his help.

Gambhir also appealed for support on Twitter, he tweeted, “We must take care of our champions jst as they make us proud. Help Asian Games Gold winner by sending a text to Babai-his wife at 8131830664”. 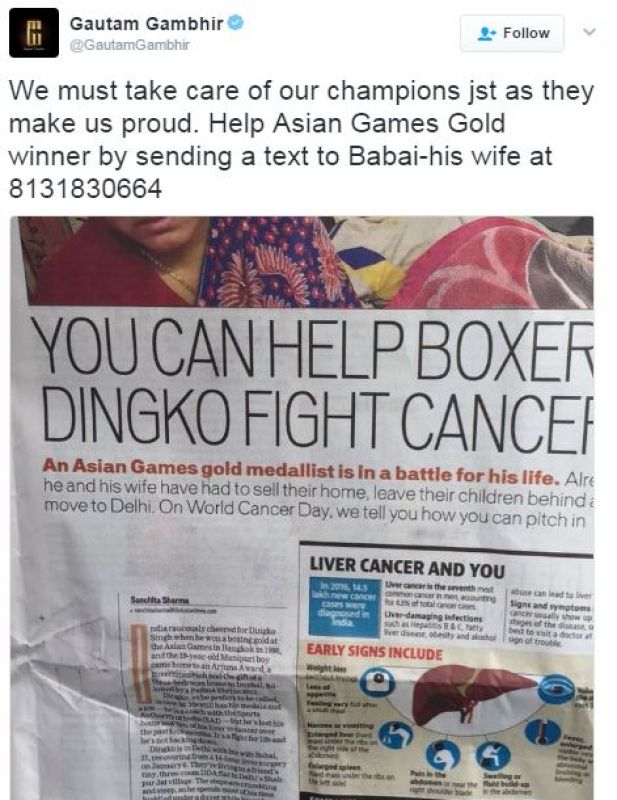 Earlier, sports minister Vijay Goel had posted on Twitter that the ministry would provide all the financial support to Dingko’s family.