Dharamshala: Opener Prashant Chopra hit thefirst triple hundred of the current first-class season as Himachal Pradesh piled up a massive 729 for 8 declared against Punjab on the second day of the Ranji Trophy group ‘D’ encounter while the Day Two match in the Group ‘A’ section between Hyderabad and Maharashtra at the Gymkhana Ground was washed out due to the wet-outfield conditions.

At stumps, Punjab were 110 for 1 with Jiwanjot Singh unbeaten on 34 in company of Uday Kaul (2 batting). Opener Pargat Singh scored an attacking 64 off 69 balls before being dismissed.

The match however belong to Chopra, who had scored in excess of 900 runs last season and was recently a part of the India A team.

Chopra, started the day at 271 and went onto score 338 off only 363 balls with as many as 44 boundaries and two sixes to his credit. 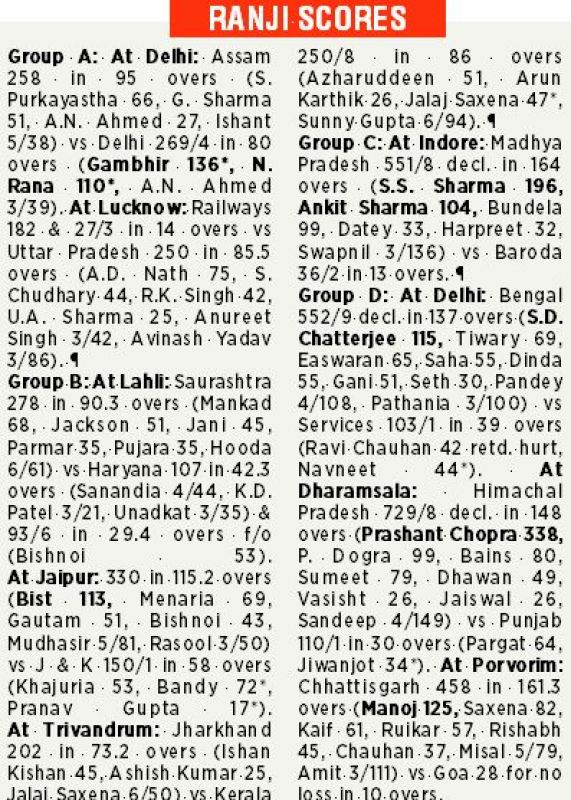 Finally, it was off-break bowler Pargat, who ended Chopra’s incredible effort by taking a return catch.

In another group ‘B’ match at the Palam Ground in Delhi, Bengal declared their first innings at 552 for 9, with top three players Sudeep Chatterjee (115), skipper Manoj Tiwary (69) and Wriddhiman Saha (55) amongst runs.

Umran Malik's journey begins at the speed of his thunderbolt