Is Eden Garden ready for India vs Australia ODI despite Sourav Ganguly’s assurance?

Uncertainty reigns despite Sourav Ganguly's assurances that Eden Gardens will have a sporting wicket for the India vs Australia ODI. (Photo: PTI)

Kolkata: After series wins in the West Indies and Sri Lanka, Team India are set to turn their attention to old foes, Australia, who are scheduled to play five ODIs and three T20Is in the country.

The dust is yet to settle from the bruising battle that the two sides had against each other, in the four match Test series, earlier in 2017, which India clinched 2-1, and speculations are already rife about what the new series has in store.

The pitch at the Maharashtra Cricket Association Stadium in Pune was already subject to a lot of talk, as it started turning square from a very early stage in the first Test of the Border-Gavaskar Trophy, earlier this year.

This time however, the focus seems to be on the 22-yards at the Eden Gardens in Kolkata.

Eden Gardens' curator Sujan Mukherjee expressed his concern about the weather in Kolkata, a city that is experiencing the monsoon season currently.

“It has been raining continuously in Kolkata. I am obviously tense and worried because I need clear sky and the sun baking the wicket so that we can prepare a good wicket,” Mukherjee told News18. “Even till Tuesday we had rain and then again, the forecast remains the same for the next few days.”

However, Mukherjee clarified that it is less about the under-preparedness of the wicket, and more about the weather coming in the way of the ground staff dishing out a batsman-friendly pitch, that he is concerned about.

“No, there is no threat of an under-prepared wicket as such. We have prepared quality wickets in the last couple of years and don’t expect anything but the best effort from our groundsmen,” he continued. “But then, you cannot fight nature. Almost all regions around Kolkata are flooded at the moment. In such a scenario, to expect that you will get a belter will be wrong.”

The Eden curator further went on to state that if the rains prevail, then we could expect a low-scoring game on October 21, with the spinners holding the advantage.

“The situation might as well see the home team getting slight advantage as the pitch will take turn and the dampness will make stroke-playing difficult,” he said.

As reports about the uncertainty around the Eden wicket flooded the media, Cricket Association of Bengal (CAB) chief Sourav Ganguly was quick to reassure everyone that the historic ground would be ready on time.

“The rain has stopped. The ground is in good shape and will be ready for the ODI,” the former Team India captain assured reporters after a pitch inspection on Thursday evening.

Even Mukherjee followed suit, expressing his satisfaction at the wicket.

“Everything is fine now. It's been about a week that it has not rained. I'm very, very happy with the pitch preparation which is going on full swing for the September 21 ODI. It will be a good sporting wicket as usual,” he said, contradicting his earlier statements.

Despite Sourav Ganguly’s assurance about the pitch, and how it has not rained on the City of Joy for the last few days, the weather forecast for the week leading up to the Kolkata ODI between India and Australia on September 21 does not look good.

“Rainfall is expected even during the time of the ODI and those hailing from Kolkata would know that the scenario remains the same every year around this time,” Mukherjee had said.

In fact, “a thunderstorm or two” is expected on the day of the match in Kolkata, according to Accuweather. 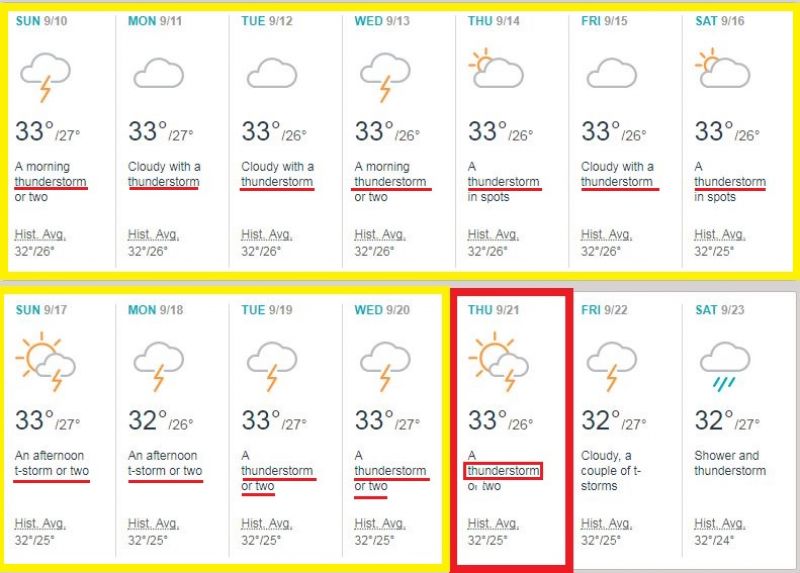 Kolkata is a city that experiences a lot of rain during this time of the year, with the streets often being flooded. As Mukherjee had himself said in his earlier comments, this is not a usual time to host cricket matches in the city.

“When we were growing up, we would have international matches in the north at this time of the year and it was only in the winters that games would be played in Eastern India,” he said.

Team India has been playing a lot of cricket in recent times. They played as many as 13 Tests in the 2016-17 home season. With yet another packed schedule coming up, it has become more and more difficult for the organisers to plan the matches in accordance with the weather.

With the changing times, it seems the ground staff across the country are having to fight a losing battle against Mother Nature, so that the cash registers could ring the pretty sounds from broadcasting rights.

“You would have games down south during the summers. But that is not followed anymore and whichever association has its turn, organises the game. So well, we will now try and give it our best shot,” Mukherjee said.

(With inputs from PTI)