In the recently-concluded second Test against Sri Lanka, which India won by an innings and 53 runs, Ravindra Jadeja contributed an unbeaten 70 and also took seven wickets, including a five-wicket haul. (Photo: AP)

Dubai: India's Ravindra Jadeja on Tuesday edged out Bangladesh's Shakib Al Hasan to claim the top-rank among all-rounders apart from maintaining pole position in the bowlers' chart in the latest ICC Test rankings.

Jadeja currently has 438 points among the all-rounders while Shakib has 431 points. 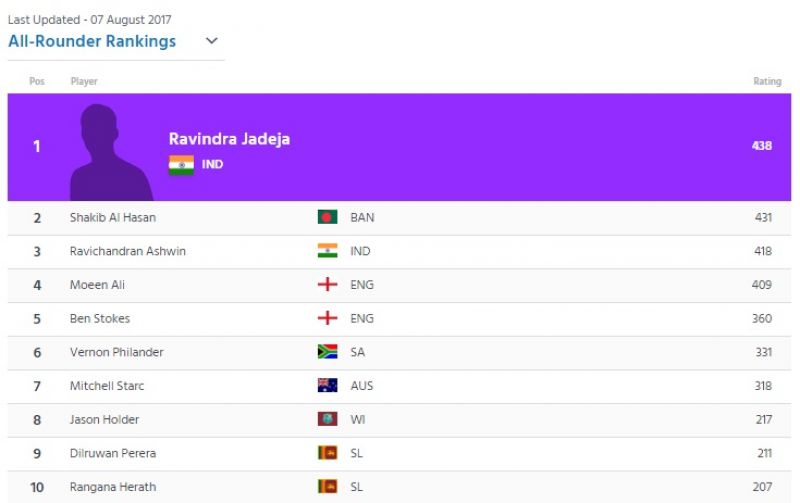 Incidentally, the match which put Jadeja on top of the heap is also the one where he breached ICC Code of Conduct to be handed a one-Test suspension.

In the recently-concluded second Test, which India won by an innings and 53 runs, Jadeja contributed an unbeaten 70 and also took seven wickets, including a five-for.

In the bowlers' list Ravichandran Ashwin (842 points) dropped a place to be third with Jimmy Anderson a notch below Jadeja.

England all-rounder Moeen Ali has finished the series against South Africa with a career-best rank of 21 among batsmen, 18th among bowlers and fourth in the table for all- rounders.

His rise in the rankings was due to consistent performances as he became the first player to score 250 runs and take 25 wickets in a four-Test series. He was named the player of the series along with South Africa's Morne Morkel.