An eye for excellence

R.S.R. Murthy, a distinguished cricketer and now coach to Mithali Raj, captain of the Indian Women’s Cricket Team, reflects on his own journey and that of his star player.

R.S.R. Murthy has honed the skills of many city cricketers, including the Indian Women’s Cricket Team captain Mithali Raj. But it is only after Mithali’s phenomenal performance at the ICC Women’s World Cup, that he is back in the spotlight. In fact, the Telangana government even awarded him with `25 lakh for his efforts.

Before starting his journey as a coach two decades ago, Murthy represented Andhra Pradesh in various formats. Recalling his early days, he shares, “I got interested in cricket when I was a Class VII student in Kakinada. We had inter-school competitions, and I used to watch my seniors play. Slowly, I got interested too.”

He adds, “I represented Andhra Pradesh in all formats — under-22, under-25 and the Ranji Trophy too. I started playing for the Railways in 1982, and was the captain of the South Central Railway cricket team. After retiring in 1997, I joined St John’s Cricket Academy as a coach and simultaneously became an administrator in the Railways, where I am the head coach for both the men’s and women’s cricket teams.”

Murthy has watched V.V.S. Laxman grow as a cricketer in the academy, though he did not train him. “In women’s cricket, Mithali is outstanding. There are no words to describe her achievement. She gives great importance to her practice and never skips it,” he says. 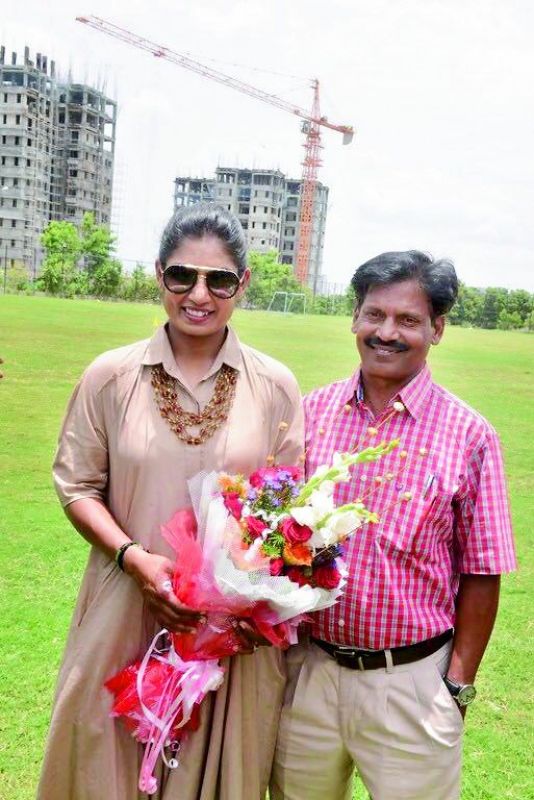 Talking about Mithali’s journey, Murthy says, “By the time she joined the Railways in 2001, she had already represented India in 1999. She started her cricket career at St John’s. She would come and watch as her brother played in the nets. One of the coaches, Jyothi Prasad, saw her throwing a ball and noticed that she has very strong bones. Later, Mithali’s father advised her to make cricket her career, even though she was already into Bharatanatyam.”

He adds, “In those days, not many women took up cricket, yet Mithali's parents enrolled her. Since then, Mithali has achieved and broken so many records. She received the Arjuna Award in 2003. She has been performing and doing well in all formats. There is no change in the attitude for the game and till today, her hunger for runs remains the same.”

Back then, Murthy admits that it took a lot of convincing to make women join the game. “The Indian Railways offered jobs to women cricketers and played a pivotal role in encouraging women to play cricket. Those days, parents were not keen to get their daughters into cricket, because there was no future as in men’s cricket,” he shares.

While men’s cricket has traditionally enjoyed greater visibility and sponsorship, women’s cricket matches were earlier not even televised! Says Murthy, “In 2005, Mithali took Team India to the finals of the World Cup but that was not televised at all. But a lot has changed since. Everybody watched this World Cup and the standard of women’s cricket has improved tremendously. It is a good sign for women’s cricket and Mithali has played an important role. Since 1999, she has been playing for the country with the same determination.”

Murthy credits BCCI for the huge difference in women’s cricket. “After BCCI took over women’s cricket, there is a huge difference. Earlier, there was no one to support them financially, but now, at least they have regular tournaments. As a cricketer, if they don’t play matches regularly, what motivation will they have?” he asks.

But he also adds that there’s a long way to go. “They are still not paid on par with men’s cricket. Last year, they started signing women cricketers on a contract basis. But what they are getting paid is very less — maybe around Rs 15 lakh a year, while the likes of Virat Kohli get Rs 2 crore. I am not comparing, just pointing out the huge gap,” he says.