The team slumped to their sixth consecutive loss in this year's edition of the IPL. (Photo: File)

New Delhi: Michael Vaughan, the former England captain on Sunday said that the current Indian skipper Virat Kohli should be given a rest ahead of the upcoming World Cup.

His comments came moments after Royal Challengers Bangalore four-wicket loss against the Delhi Capitals. The team slumped to their sixth consecutive loss in this year's edition of the IPL.

"If India are smart they rest @imVkohli now for the World Cup ... Give him some time off before the big event ... #IPL2019," Michael Vaughan, the former England skipper posted on his Twitter account. 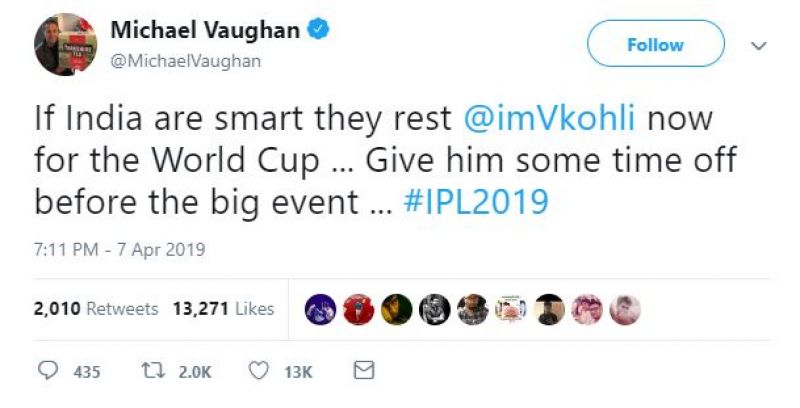 After facing their sixth consecutive defeat, RCB recorded the joint-worst start to an IPL season. Previously Delhi Daredevils also recorded six losses in a row in 2013.

To make the playoffs of the IPL, every team should win a minimum of eight matches. RCB after suffering their sixth defeat in a row, now only has eight matches left in the group stage and they need to win every game to make it to the playoff stage.

Ahead of the IPL, Indian coach Ravi Shastri had also expressed his concern for players full participation in the tournament.

India takes on South Africa in their first game in the upcoming World Cup on June 5.