Bengaluru: They have begun the IPL-10 season the way they ended 2016 — a loss to reigning champions Sunrisers Hyderabad, albeit with a team missing several of their main personnel. Royal Challengers Bangalore, known for their sluggish starts as coach Daniel Vettori feared, will need to put behind the hiding at Hyderabad as they begin their home season against Delhi Daredevils.

There’s a striking similarity in the teams’ disposition, and it isn’t sunny. They aren’t in a happy state with key members out with either injuries, recuperation or unavailability. If the Challengers are missing Virat Kohli (until the second week at least), KL Rahul (for the entire season) and in all probability AB de Villiers for this game as well, the Daredevils, starting their season at the M. Chinnaswamy stadium on Saturday are still numbed by the loss of the explosive South African import Quinton de Kock.

The left-hander’s match-winning abilities is what will hit coach Rahul Dravid the most. Add to that the absence of Angelo Mathews, Carlos Brathwaite (for this game), JP Duminy’s pull out and Shreyas Iyer’s bout of illness which keeps him away for at least 8-10 days. Matters turned tragic as the precocious Rishabh Pant lost his father on Wednesday night.

Yet, it’s their bowling arsenal that could soothe their angst. In the past, it has been a case of the Challengers’ batting vs Daredevils’ bowling but the same cannot be said of the home team currently. Led by Shane Watson, the Challengers will need to reinvent themselves and it starts with the stand-in skipper. The Aussie didn’t light up the stage last year and will need to quickly clear the cobwebs in his mind if they are to step on the pedal in the absence of their vital cogs. 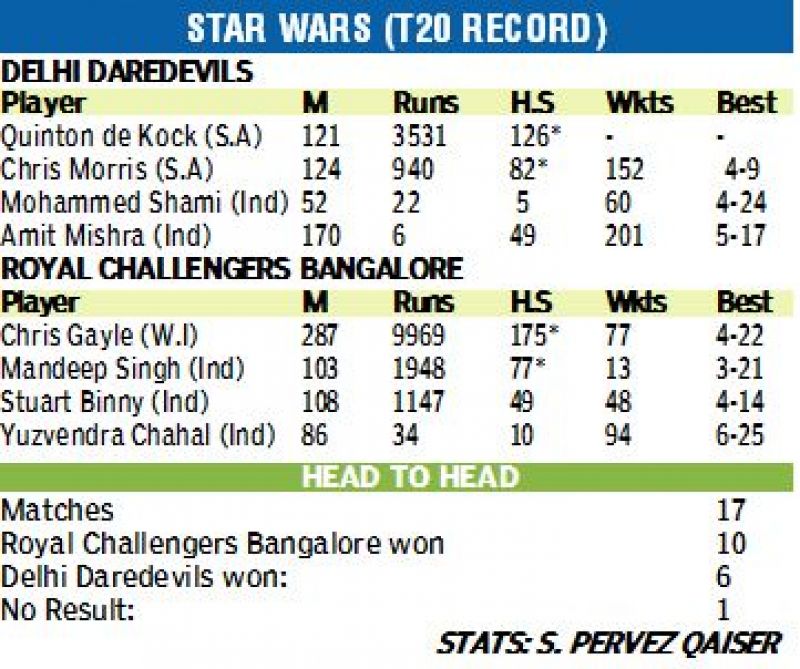 Missing one key player is difficult but when you lose 1, 2 and 3… well, the opposition starts whistling. The Daredevils, on their part, led by the 38-year-old Zaheer Khan, who has stirred himself up after IPL-9, have an excellent bowling attack comprising Mohd Shami, Kagiso Rabada, Pat Cummins and the invaluable Chris Morris. Pencil in Amit Mishra’s miserly leg-spinners, Shahbaz Nadeem and Jayant Yadav’s all-round ability, it does give them hope in what will be a cauldron.

Delhi were knocked out of the playoffs by Challengers in a low-scoring league game at Raipur last year. Since then, Pawan Negi, rolled the red carpet by DD in the 2016 auction before being shown the door this year, has swapped jerseys for RCB. A change of form would also be in order, for himself and his new team.