While Billy Stanlake (2/29), Iqbal Abdulla (2/36) and Pawan Negi (2/3) scalped 2 wickets each, it was Kedar Jadhav’s counterattacking half-century that helped RCB secure a modest total after they had lost the likes of Chris Gayle, Shane Watson and Mandeep Singh even before reaching 60. The Maharahstra batsman hammered 69 runs to turn the tables on DD, who looked to run away with the advantage.

While the total was not big, Kedar’s knock gave RCB a chance to put up a fight. It also helped the matters for RCB as no DD batsman, excluding Pant, showed patience to stay at the crease long enough.

It's all over for Delhi Daredevils. They have made an absolute mess of a chase as no batsman showed patience to accompany Rishabh Pant to stay in the middle. RCB have done a fantastic job while defending a modest total.

WICKET! Will any DD batsman mind to accompany Rishabh Pant in the middle? Pat Cummins gets out.

WICKET! Carlos Brathwaite fails to impress, Yuzvendra Chahal does not. He was denied a wicket a ball earlier and he made amends on the very next ball. RCB are not giving in even as Rishabh Pant continues to strike from the other end.

WICKET! RCB continue to chip in with wickets at regular intervals. Iqbal Abdulla traps Chris Morris before the wickets.

WICKET! Billy Stanlake gets his 2nd wicket as Sanju Samson gets out just when DD wanted him to stay put. Stuart Binny takes an easy catch in the deep.

WICKET! Two wickets in 2 overs for RCB. Billy Stanlake's pace was a bit too much for Karun Nair. The ball crashed onto the stumps as RCB get their second wicket.

WICKET! Tymal Mills has struck in his first over as he sent Aditya Tare packing. RCB needed that breakthrough at a time when they are defending a modest total.

Delhi Daredevils struck just when it looked RCB would run away with the advantage after Kedar Jadhav's blitzkrieg. Chris Morris has three wickets against his name, Zaheer has 2 while Shahbaz Nadeem and Pat Cummins has a wicket each.

WICKETS! 2 wickets in an over and DD have stalled RCB's charge. First, Vishnu Vinod gets out run-out and then Zaheer Khan shows the value of experience as he gets the better off Kedar Jadhav.

WICKET! Zaheer removes Stuart Binny just when his and Kedar Jadhav's partnership has started to look threatening for Delhi Daredevils. Binny times one too well for his liking and Sam Billings holds on to an easy catch in the deep. Kedar Jadhav, meanwhile, has brought up his fifty.

Kedar Jadhav has demolished Amit Mishra and how. RCB were 74/3 after 13 overs and then came the Jadhav charge as he smacked 2 sixes and 2 fours to score 24 runs off the 13th over. Some mighty hits. How RCB needed them!

WICKET! The dance down the track has not worked for Shane Watson as he misses the ball and Rishabh Pant makes no mistake dislodging the bails. Shahbaz Nadeem, who has bowled well thus far, gets his first wicket. RCB are in a spot of bother now.

WICKET! In the final over of powerplay, Pat Cummins removes Mandeep Singh as he tries to force one through the off side. He had hit two fours in that over and tried for another. Did not succeed.

WICKET! Chris Gayle gets out on a fulltoss. A lolly of a ball from Chris Morris but Gayle mistimes it. Sanju Samson takes a fine catch flying backwards at mid-off.

Bengaluru: Royal Challengers Bangalore have won the toss and elected to bat against Zaheer Khan-led Delhi Daredevils at the M Chinnaswamy Stadium here on Saturday. 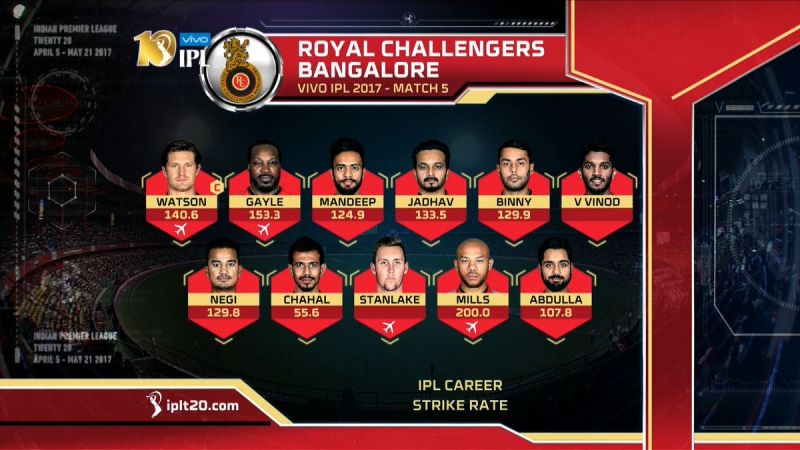 For DD, Kagiso Rabada will have to wait to make his IPL debut as Pat Cummins, Chris Morris, Sam Billings and Carlos Brathwaite take the four slots for foreigners. 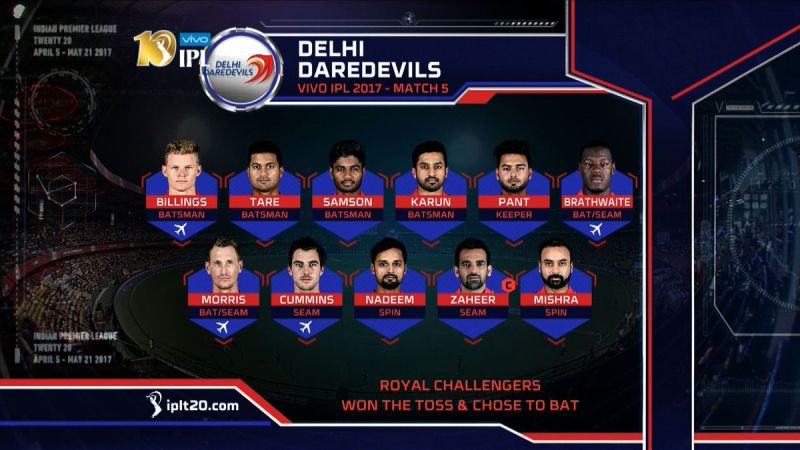 After being convincingly beaten in their opening game of IPL 10 by the defending champions Sunrisers Hyderabad, Royal Challengers Bangalore will be eager to secure their first win of the season as they host Delhi Daredevils at the M Chinnaswamy Stadium here on Saturday.

While RCB will still be without Virat Kohli, who is recovering from shoulder injury he sustained during the third India versus Australia Test in Ranchi, there is no clarity on AB de Villiers’ participation. If he does not play in this game, Shane Watson, who could not contribute much with bat and ball in the first game, will continue to lead the team.

Although RCB look extremely weak with their batting due to the absence of KL Rahul, Kohli, de Villiers and Sarfaraz Khan, the Bengaluru-based side will bank on Chris Gayle – to give them an explosive start and Tymal Mills and Yuzvendra Chahal to turn up the heat on the visiting team.

However, Gayle would not have it easy as Delhi Daredevils, who have one of the most balanced bowling units at their disposal. While the Rahul Dravid-mentored side is hampered by the absence of JP Duminy and Quinton de Kock, their bowling attack with vast options and variety – Zaheer Khan, Kagiso Rabada, Mohammed Shami, Chris Morris, Pat Cummins, Amit Mishra, Jayant Yadav and Shahbaz Nadeem can be a game changer for the side which is looking to win their first IPL title.

While bowling is DD’s stronger suit, their batting, despite the presence of Karun Nair, Rishabh Pant, Corey Anderson, Sanju Samson and others, looks weaker on the paper.